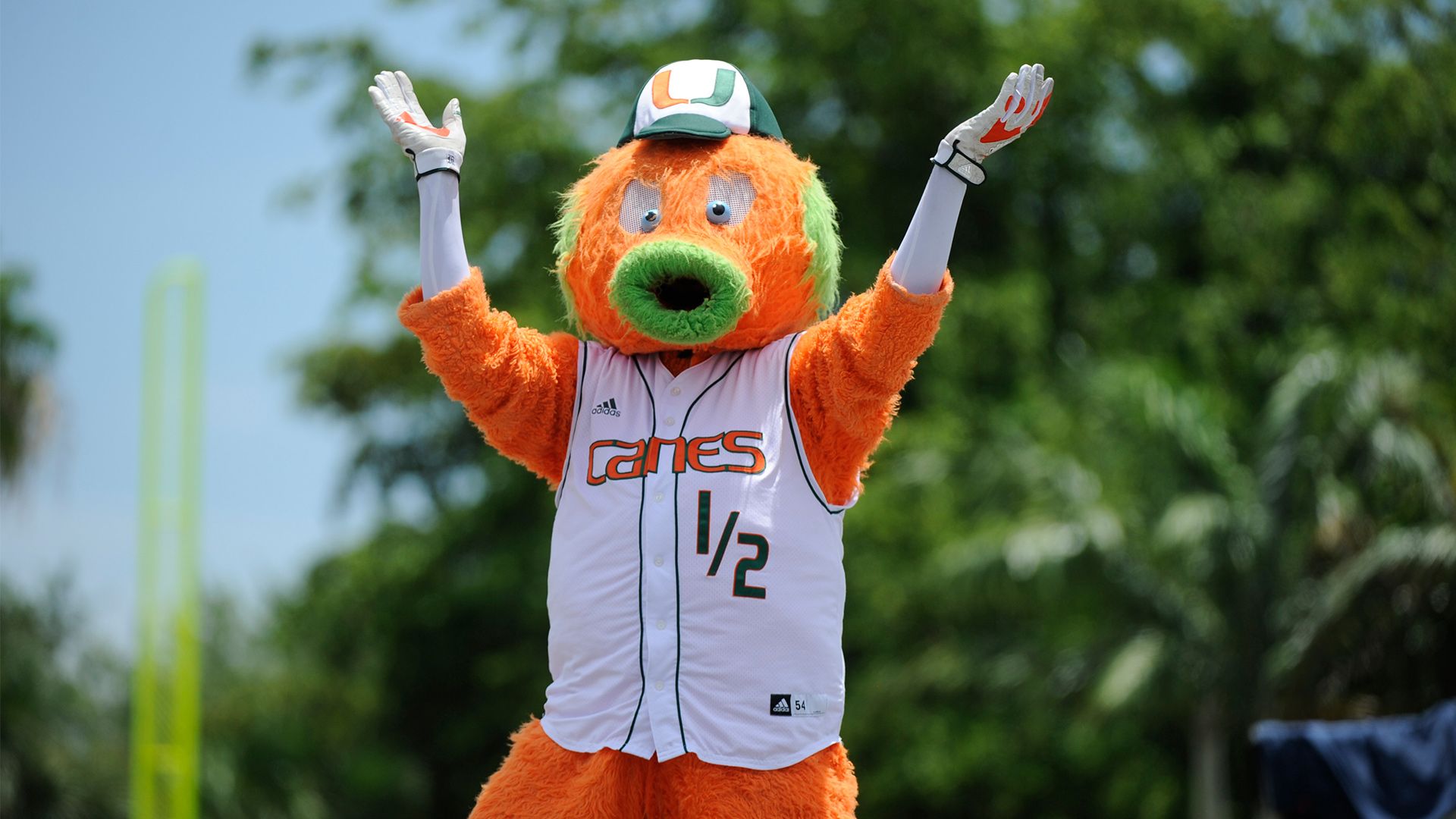 Birth of a Maniac

Upon his arrival to Miami in 1963, “The Wizard of College Baseball” transformed the Hurricanes baseball program. He took the Canes from an afterthought to a national powerhouse that won over 1,200 games, made 20 consecutive NCAA Regional trips, played in 12 College World Series and won two national championships in his 30 years at the helm of UM.

Equally as important to his on-field success, Fraser’s mastery of marketing college baseball helped develop the sport into a major player in college athletics. From his brainchild of having ESPN cover games in Miami, to his “Dinner on the Diamond,” inventing batgirls with the introduction of the Sugarcanes, he took Mark Light Stadium and the game to a new level.

One of his most important visions was the formation of The Miami Maniac.

“We were enamored with John, his work and the way he got the crowd involved,” longtime public address announcer Jay Rokeach recalled. “He did so much to make ballgames more fun. That was right up our alley.”

Fraser left Omaha and knew what he wanted to add to the program.

During the offseason, he held multiple discussions with then-marketing director Rick Remmert and his coaches’ committee, which featured some of the top business executives in South Florida.

“As we started planning the 1982 season, we wanted to do more,” said Remmert, who now serves as Miami’s Associate AD of Alumni Programs. We led the country in attendance in 1981 but we wanted it to get bigger and better.”

At the time, most professional baseball teams and college programs didn’t have mascots. The Hurricanes had hired other performers in the past for select games like “The Clown Prince of Baseball” Max Patkin and the San Diego Chicken.

Miami became the first program to bring in the renowned San Diego Chicken for a college baseball game. For a midweek showdown, the Hurricanes normally drew about 1,000 fans but with the help of the Chicken, 5,600 people attended a Wednesday night game against Biscayne College.

Fraser and Remmert realized the power of having a mascot and dreamed of creating their own.

With the help of local businessman Jeff Werner, a costume was commissioned for the 1982 season. Similar to the Philly Fanatic, The Miami Maniac features a big snout, big belly and baseball shoes. His fur is primarily orange with flashes of green, most commonly donning the baseball uniform with the number ½ on it. 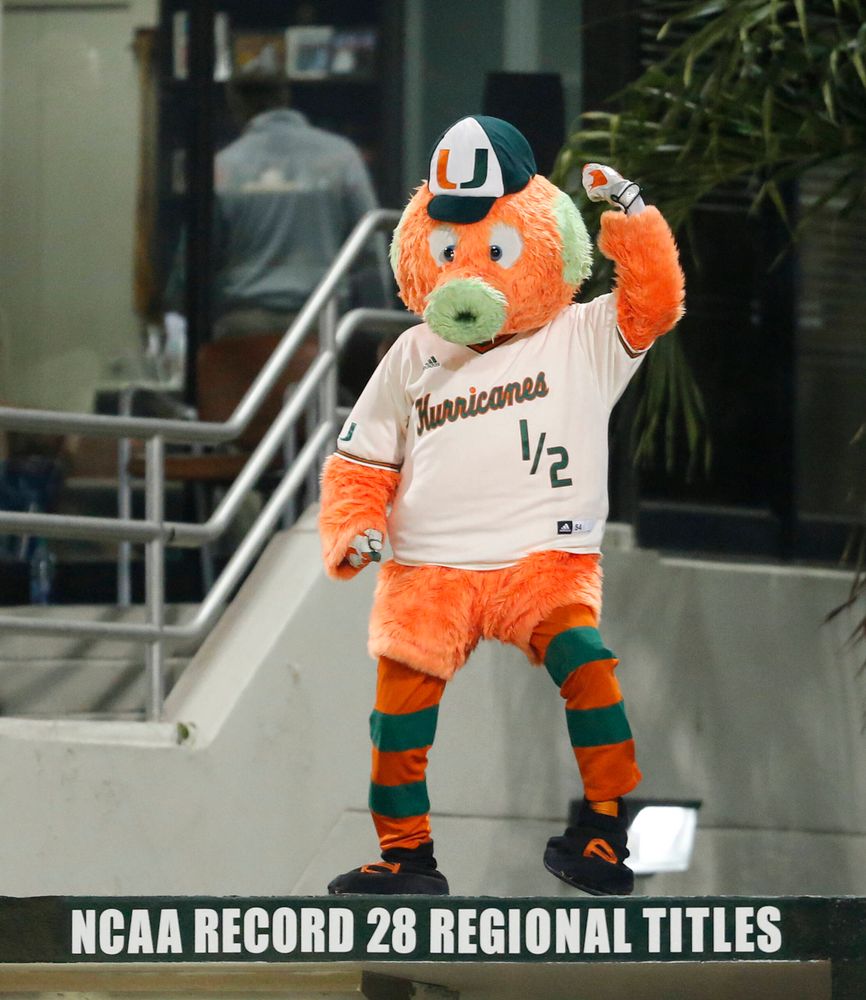 During the year, a variety of people had the honor of being The Maniac, including students, a former player and manager.

However, Fraser and Remmert thought there was more potential with the character.

“We always thought there could be more than what we were showing,” Remmert recalled. “We didn’t know what ‘it’ was but when we saw ‘it,’ when knew ‘it’ was the best. We saw John at the College World Series and he was the best.”

With the Hurricanes playing South Carolina in Columbia, Fraser tasked Remmert with recruiting Routh to South Florida to become The Miami Maniac.

Remmert spoke to Routh, who was in his final year of his undergraduate studies at South Carolina, and locked in a trip to fly Routh down to Coral Gables towards the end of the regular season to perform as the Maniac for the Miami-Florida State series.

“We didn’t know it at the time, but April 17, 1982, was the day that the Maniac that we’ve come to know was born,” Remmert said. “People could tell that there was something different about him. He was different than any of the other people we tried. He was amazing. The crowd started getting into it. He was the ‘it’ that we were looking for.”

“John brought that suit to life. He was the finest mascot ever. He had this unbelievable ability to turn foam and fur into life,” Remmert continued. “John played a huge role in making The Light the finest family ballpark in the country. Somewhere there is a Wizard who is smiling.”

Routh’s talent and creativity shined. With Routh in the suit, The Maniac put on skits with the Hurricanes’ student-athletes, the opposing teams, umpires and even mimicked Fraser’s mannerisms. He showcased his skills even imitating Olympic athletics.

The Miami Maniac became an integral part of Hurricanes baseball and the experience at Mark Light Stadium.

“There is nobody like John Routh,” said UM head coach Gino DiMare, who grew up attending games at The Light before becoming a four-year standout for the Canes. “He was an extension of our team. He is a big part of the program. Certainly, Coach Fraser sits at the top of Mount Rushmore and Coach Morris is right there with him. John and JayRo have to be a huge, huge part of the history of the University of Miami baseball program as well.”

Routh’s biggest act as the Maniac came in 1985. With the Hurricanes set to play Maine in a nationally-televised game on ESPN, Routh brainstormed the idea of hosting a mascot wedding.

Invitations were sent out to fans and a select few got the opportunity to dress up as Maniac and be a part of the wedding party. They planned a brief ceremony that turned into a 14-minute affair, which was broadcast in its entirety live on ESPN. 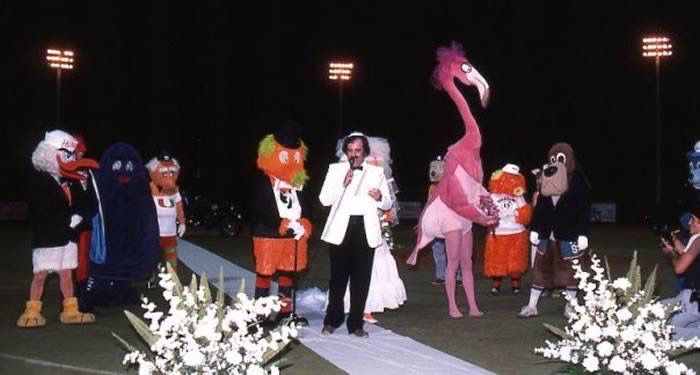 The wedding party included Sebastian the Ibis as the best man, Freda the Flamingo from Hialeah Racetrack as the maid of honor, along with Grandpa Maniac, the Maine Black Bear, Bud Man, Grimace and other McDonald’s characters and The WIOD Sports Hound.

The service was officiated by “The Right-On Reverend Rabbi Rokeach,” with the Sugarcanes holding up bats to form an archway after carrying the Maniac in. The Miami Maniac and Mrs. Maniac cut a wedding cake and had their first dance before leaving in a vintage 1920’s automobile.

“It was funny. Rick had written a great script and Jay did his thing,” Routh said. “He turned to Mrs. Maniac and ask her, ‘if she’d stick with him in ballparks around the country.’ She pulled out a quarter and flipped it in the air. Fortunately, it landed on the right side. The Maniac huddled with his group of groomsmen and they all high-fived and agreed. The Maniac actually spoke the first and only time when he just made a high-pitched noise.”

Nearly 40 years later, The Miami Maniac’s presence is still being felt at Mark Light Field and the University of Miami.

Routh can’t pinpoint the exact moment but The Miami Maniac created one of the most well-known Hurricanes’ cheers, the C-A-N-E-S spell-out.

He initially tried to start a similar chant at South Carolina but it never became tradition.

“I was thinking C-A-N-E-S is five letters. One night I just started spelling it out and it started to grow as more and more people caught on,” Routh said. “In the mid 1980s, The Maniac was more popular than Sebastian the Ibis. When UM brought basketball back in the 1985-1986 season, the Maniac performed as the official mascot for basketball and did so far about five years.”

Sebastian the Ibis adopted the Canes spell-out, a ritual that still stands today at all Hurricanes’ sporting events.

From 1983 through 1991, the Maniac was the official mascot of the College World Series. Throughout the years, he has appeared at various minor league baseball games throughout Florida and has entertained in 49 states, as well as Europe and Japan.

With the help of the Miami Maniac, the program would set national college baseball records for season tickets sold, attendance and revenue, and led the nation in these categories for seven consecutive years from 1981 to 1987.

“This is what Ron Fraser wanted,” Rokeach said. “John Routh started a tradition with mascots on a college level. He got mascots to be noticed. At the University of Miami, it’s more than just a baseball game. I think it’s probably one of the most fun ballparks that you can come to.”

Routh transitioned into a role as both the Maniac and Sebastian the Ibis before leaving UM to becoming Billy the Marlin once the Florida Marlins emerged in 1993. Following his career as mascot, he became the executive director of the UM Sports Hall of Fame.

With Routh preserving Hurricanes’ history, several students are continuing The Miami Maniac tradition under the guidance of associate director of marketing Alejandro Rengifo.

“The Maniac helped create some of the tradition at Canes baseball. Having him there to this day is a reminder of all of those special moments,” Rengifo said. “The fans distinguish The Maniac and Sebastian. They have rooms in their hearts for both of them, but people aren’t at baseball asking for Sebastian the Ibis. They all want to see The Maniac. They all expect to see The Maniac. It’s really cool to me that people have invested so much love for The Maniac and what he stands for and represents. He is the face of baseball.”

To this day, Fraser’s idea lives on, adding to the unique atmosphere at Mark Light.

“It’s impossible to say in words how much John was special to the University, to Ron Fraser and to our baseball program,” Remmert said. “Now, the successor Maniacs have done a great job. They’ve kept the tradition going. It’s been 38 years for The Miami Maniac and he’s still going.” 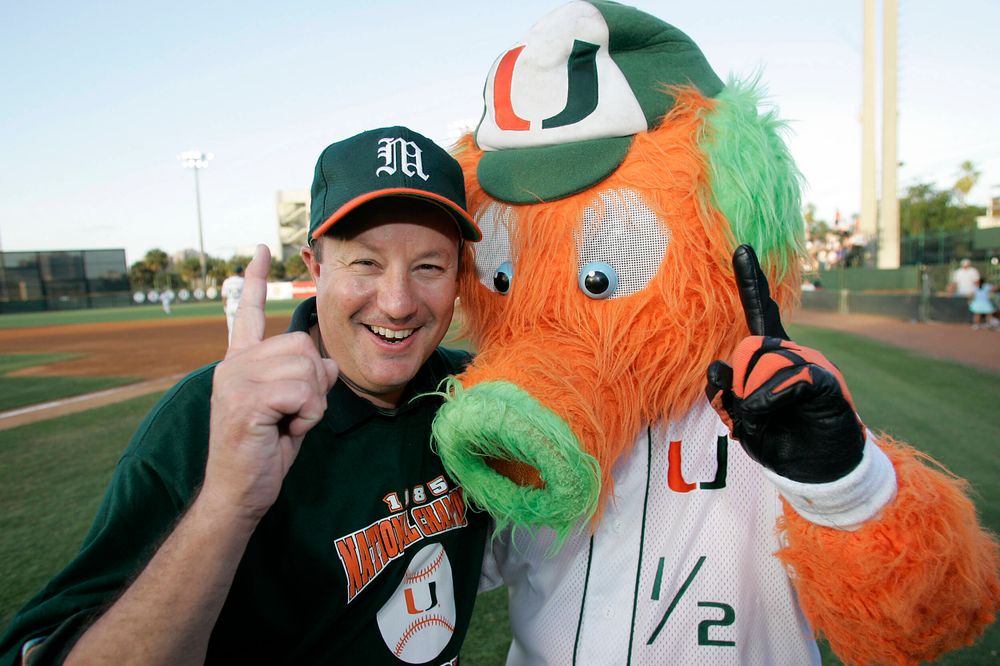