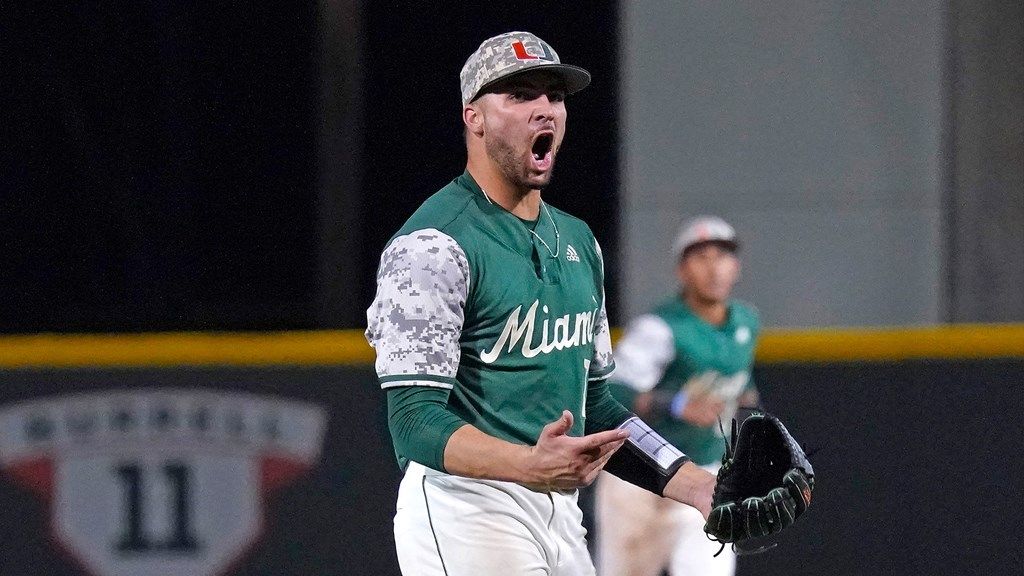 Both Van Belle and McMahon earned spots on the second team after posting brilliant performances in the abbreviated 2020 season that was halted due to the COVID-19 pandemic.

Van Belle was Miami’s ace in 2020 and one of the best pitchers in all of college baseball this season, going 2-0 with a team-leading 0.68 ERA and tied with McMahon for a team-best 38 strikeouts while walking just four batters over team-high 26.1 innings pitched.

The 6-foot-2 right-hander was voted team captain by players and coaches ahead of the 2020 season and entered the year as a second team Preseason All-America selection by both Collegiate Baseball and the National Collegiate Baseball Writers Association (NCBWA).

A dominant force every time he took the mound, Van Belle did not allow an earned run over his first 26.1 innings pitched in 2020. The redshirt senior posted a career-best 14 strikeouts over seven scoreless innings in a win over Towson on Feb. 28. The Pembroke Pines, Fla., native was named the NCBWA Pitcher of the Month for February and was ranked the top senior pitcher by D1 Baseball following the 2020 season.

McMahon followed Van Belle on the mound in Miami’s rotation, making four outstanding Saturday starts. The junior right-handed pitcher went 3-0 with a 1.05 ERA in his four appearances as Miami’s Saturday starter. McMahon led the Canes with three wins and was tied with Van Belle with a team-best 38 strikeouts while walking just five and held opponents to a .207 batting average over 25.2 innings pitched.

A native of West Chester, Pa., McMahon struck out at least eight batters in all four of his starts in 2020. On Feb. 29, the right-hander posted a career-high 12 strikeouts and allowed just three hits over 6.2 shutout innings in a victory over Towson.

McMahon was named to the preseason watch list for the 2020 Golden Spikes Award after an impressive summer performance pitching for the U.S. Collegiate National Team in 2019. He led Team USA with 15 strikeouts and posted a 2.25 ERA and a .154 batting average against over 12 innings pitched.