McDaniel the Heart and Soul of Canes Baseball

When Jake Yardeni arrived at Mark Light Field for his interview to become a student manager for the Hurricanes baseball team, he couldn’t find Robert McDaniel.

Yardeni asked about 10 people but nobody knew who he was looking for.

To the outside world, he goes by Robert McDaniel but at the University of Miami, he’s affectionately called, “GM.”

McDaniel is in his 20th season as the Hurricanes’ director of baseball operations and camps.

He is responsible for clubhouse operations, managing the team’s equipment, coordinating Miami’s travel plans and pre-game meals, supervising the team’s student managers and all camp activities.

“If you surround yourself with people like GM, you’re going to be very successful. He’s as good as anybody in the business,” UM head coach Gino DiMare said. “Without GM, we would be spinning in circles not knowing what to do. He has his thumb on so many things and he does such a good job at everything he does.”

McDaniel grew up in Miami, playing baseball at Tamiami Park and watching Hurricanes football in the west end zone at the Orange Bowl.

However, it was baseball that always stuck with him.

McDaniel comes from a long line of baseball lineage. He’s the nephew of former Miami All-American Jorge Maduro and grandson of Cuban baseball legend Bobby Maduro. His father, Robert, was drafted by the New York Yankees in the 14th round of the 1968 MLB June Amateur Draft.

His love for baseball continued to grow at Columbus High School. McDaniel decided to become a student manager.

“That’s where the nickname ‘GM’ started,” he said. “We were coming back from a district game and somebody said ‘GM’ and, ever since then, the name has stuck.”

The job mainly involved keeping score, but it would help spark the rest of McDaniel’s life.

Upon graduation, he got a chance to help out the baseball teams at Miami Dade College and Florida State University.

Quickly rising through the ranks, McDaniel was given his first professional opportunity to work in the minor league clubhouse for the Class A Princeton Devil Rays.

“In West Virginia, I lived in the clubhouse,” McDaniel recalled. “I had a twin bed and small fan blowing in my face at night. I would wake up at 5:30 in the morning to go to the hospital to wash the uniforms.”

His hard work and dedication to his craft paid off almost immediately.

McDaniel worked for the Tampa Bay Devil Rays in their inaugural season.

That same year, a job opened that McDaniel could only dream of.

He was with the Devil Rays from February until August, but he couldn’t pass up a chance to work at The U.

“It felt like home right away. Being in my backyard, this is the job I always wanted,” McDaniel said. “It was an unbelievable year. I was still learning on the job. It was my first time being in charge of a college program by myself.”

To add to his fantasy, McDaniel helped the Hurricanes claim the national championship in 1999.

He left the Canes for a few seasons to complete his studies and returned in 2002, making a massive impact on the program on a daily basis.

During his time on staff, UM has reached the College World Series seven times.

“He’s the engine that makes our program run,” junior first baseman Alex Toral said. “He’s a really positive guy. He’s just one of those guys that you like to be around.”

McDaniel is often the first person to arrive and the last one to leave Mark Light Field. Most days, he gets to the ballpark by 8 a.m. and won’t leave until after midnight. On countless occasions, GM has slept at The Light.

Even during the offseason, he spends late nights at the field.

“My sophomore year, I showed up at like 10:30 p.m. on a Saturday night to go hit. I walked into the coaches’ locker room to grab the keys and GM is sitting there on the couch watching baseball,” Toral said. “I looked at him and I said, ‘what are you doing here?’ He replied, ‘what are you doing here? I gotta finish the laundry.’ We had a scrimmage earlier that morning. It was that moment where I realized this guy is literally here all day.”

GM’s immeasurable passion for the program has rubbed off on the players, helping them understand what it means to be a Miami Hurricane.

Although McDaniel isn’t a member of the coaching staff, the players revere him.

For 10-year MLB veteran Jon Jay, it was GM who set the tone inside the clubhouse.

The players remember all that McDaniel has done for them and the program.

When former players visit The Light, before even going to visit the current team, their first stop is GM’s office.

His favorite part of the job is the relationships he’s made. He stays connected with players years after they’ve left program.

Seeing them succeed on and off the field is what makes it all worth it for him.

“GM is very passionate about his job, the University and the program,” said Washington Nationals pitching prospect Frankie Bartow, who interned for McDaniel last fall while finishing his degree at Miami. “He cares for the players, the coaches and the fans. His job is tough, but he makes sure people care for the program as much as he does.”

With baseball suspended until further notice due to COVID-19, McDaniel hasn’t been to Mark Light Field in weeks and that’s something he is completely unfamiliar with.

“If you cut my heart up, you’ll probably see orange and green in there,” McDaniel said. “I miss it a lot. Every once in a while, I’ll drive by just to see The Light because I miss it so much. I was really looking forward to the team we had this year. I thought we were gonna do really good things. When June rolls around, hopefully, we would have been on the plane going to Omaha. I miss that and wish we could have had that.” 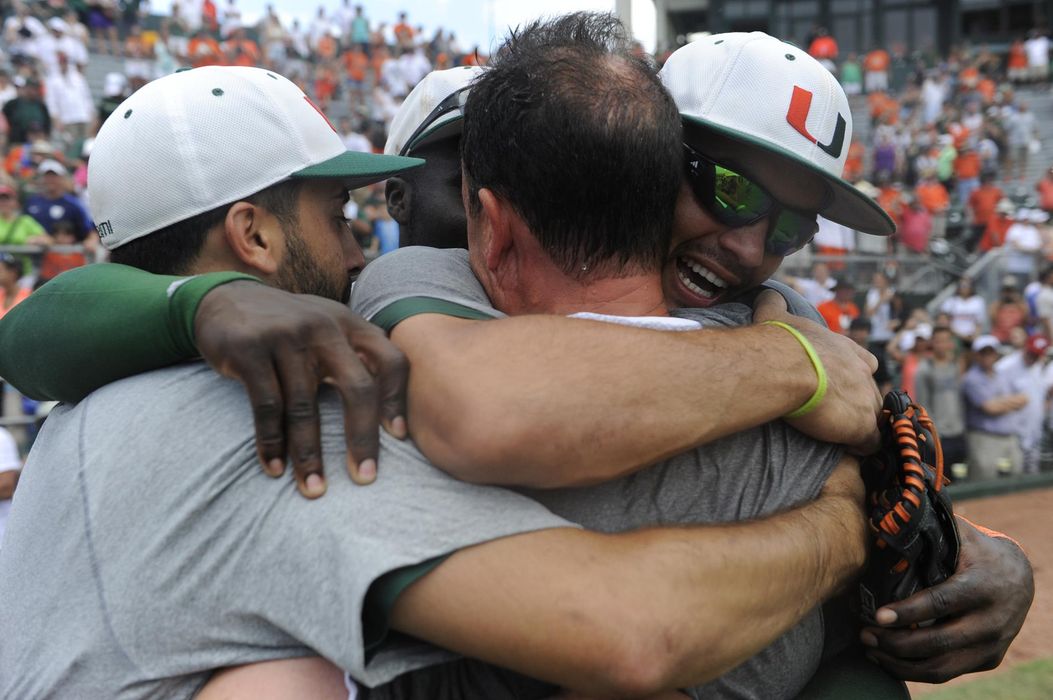