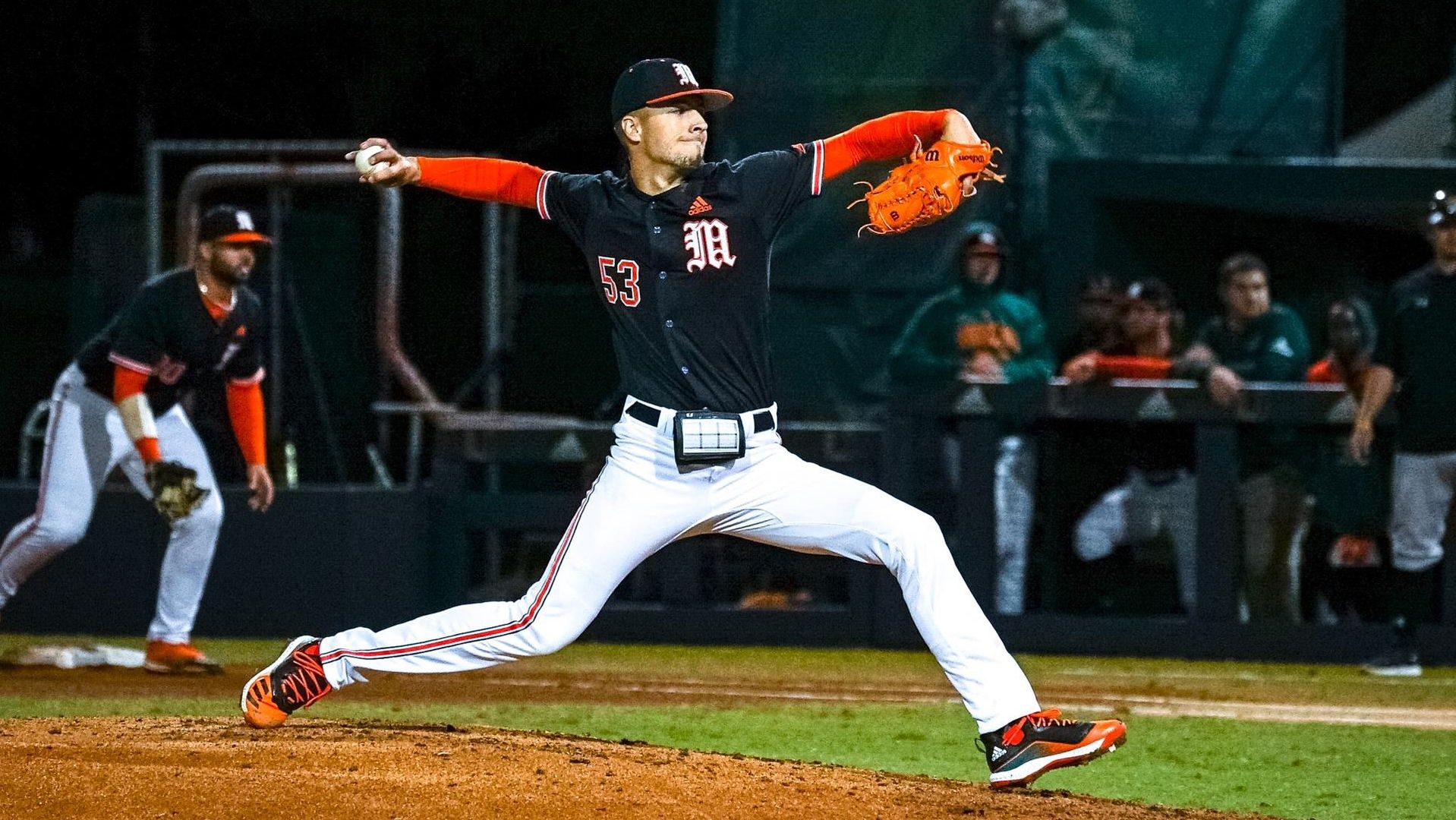 CORAL GABLES, Fla. – Brian Van Belle turned in another outstanding performance on the mound, posting a career-high in strikeouts to help the Canes beat Towson, 2-1.

The senior kept the Tigers off balance for seven impressive innings on Friday night, leading the Canes (6-3) to another series-opening victory before the 2,431 fans inside Alex Rodriguez Park at Mark Light Field.

“It feels good,” Van Belle said of his success as the Friday night starter. “Obviously its a big role. You have to set the tone for the entire weekend, but I just want to go out there a treat it like any game. I tell myself that you have to treat every game like it’s your last game.”

The Miami ace continued his dominance on the mound Friday night, setting a new career-high with 14 strikeouts. The redshirt senior posted the most strikeouts by a Hurricane since Bryan Radziewski fanned 16 batters against Virginia Tech on March 23, 2013.

“Right off the bat, I just wanted to establish command on my fastball and stick to my same approach as I have every game,” Van Belle said. “Obviously in the first inning that first batter probably, I don’t even know how many pitches it was, but it was probably like 10 pitches, I wanted to remain efficient throughout my start and thankfully I put the team in the best position to win.”

The Canes got Van Belle some run support in the bottom of the fifth, as Tony Jenkins reached on a base hit and advanced to second on a throwing error by Towson third baseman Brandon Austin. Luis Tuero doubled Jenkins home with a two-base hit to left and Jordan Lala followed with an RBI single up the middle that gave the Canes a 2-0 lead.

“It feels good to spark up the lineup,” Tuero said. “Just trying to do the best I can in every opportunity I can to score some runs for our team and put us in the best position to win games.”

Van Belle held Towson (2-5) to just three hits over seven shutout innings, throwing a season-high 105 pitches to earn his second win of the season. The right-hander has not allowed an earned run in any of his three starts this season. Opponents have scored just one run against Van Belle, while he has racked up 33 strikeouts and just two walks over 20 innings pitched.

“He is just the same guy,” head coach Gino DiMare said. “He throws a lot of strikes. It’s interesting his pitch count got up there, in the fifth inning he had 80 pitches. He has been outstanding.”

Fellow senior Tyler Keysor followed Van Belle on the mound and struck out two batters in a scoreless eighth inning.

But the Tigers mounted a late rally against freshman lefty Carson Palmquist, as Brad Powers was hit by a pitch and advanced on a passed ball to put a runner on second with two outs. Burke Camper hit an RBI double off the top of the wall in left to bring Towson within a run, but junior Daniel Federman came in to shut the door and earned his second save of the season.

The Hurricanes return to action Saturday against the Tigers for Game 2 of the weekend series. Junior right-hander Chris McMahon (1-0, 2.25 ERA) will take the mound for Miami opposite Towson sophomore right-hander Nick Ramanjulu (1-1, 1.69 ERA). First pitch is set for 7 p.m.