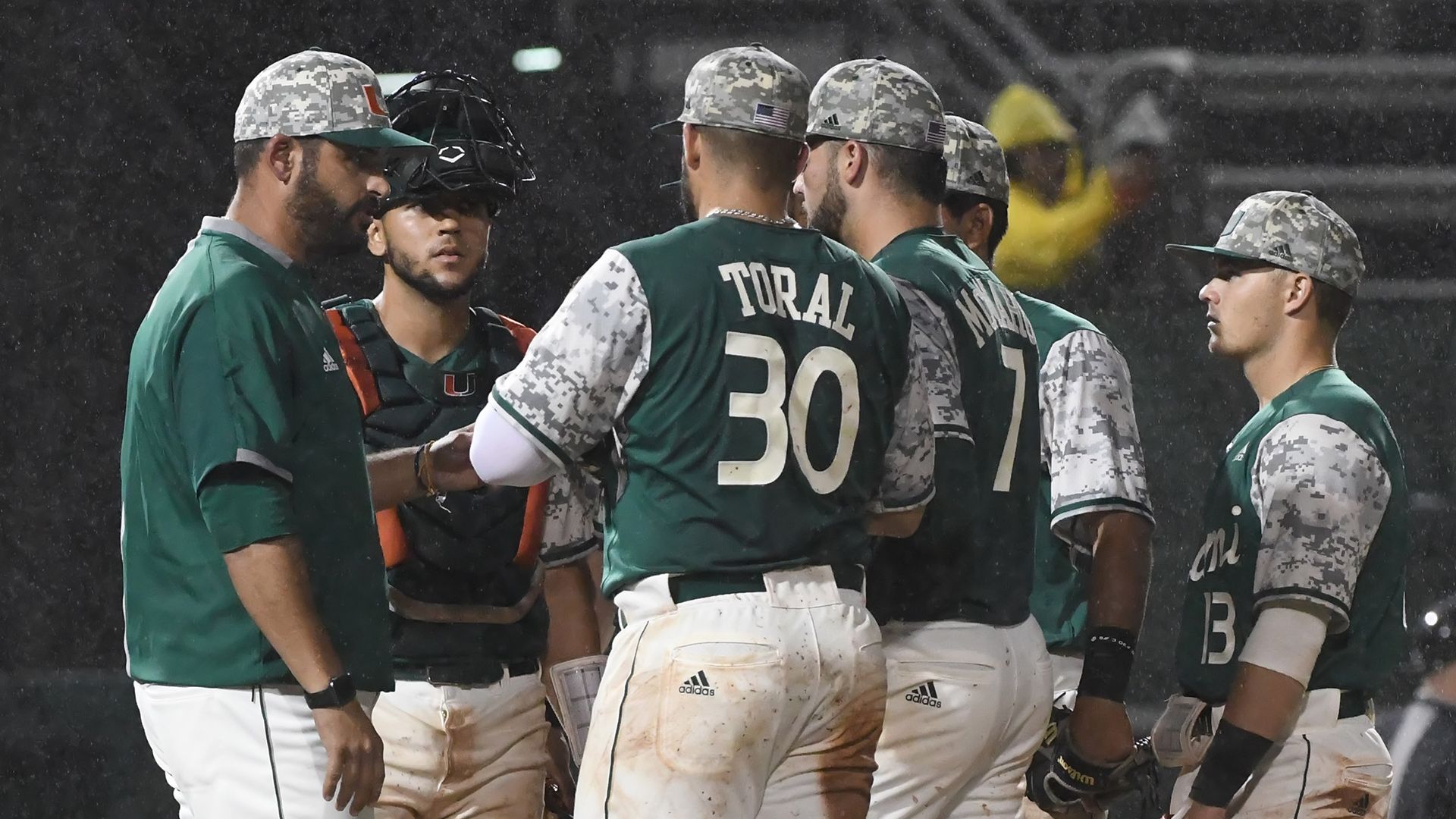 CORAL GABLES, Fla. – It was another extra-inning affair in Coral Gables, as the No. 2 Florida Gators defeated the No. 1 Miami Hurricanes, 7-4, in 10 innings on Saturday night.

For the second straight night, the Canes and Gators went to extra innings before a sold-out crowd of over 4,000 fans inside Alex Rodriguez Park at Mark Light Field. Miami was just one out away from evening the series, but the Gators forced extra innings and took the lead for good in the 10th.

“It’s disappointing,” Miami head coach Gino DiMare said. “We had the game right there where we wanted it, ninth inning, just couldn’t close it out, couldn’t finish it. … Bottom line is we’ve got to finish the game.”

The Hurricanes entered the top of the ninth leading, 2-1, courtesy of a Raymond Gil RBI single in the seventh inning. Closer Daniel Federman, who recorded the final out of the eighth, returned to the mound looking to finish off the game for Miami.

But the Gators mounted a rally against the junior, with Kris Armstrong leading off the inning with a single and advancing to second on a sacrifice bunt. After striking out Cal Greenfield, Federman had leadoff man Jud Fabian in a 1-2 count before the center fielder hit an RBI double down the left field line that pushed home Armstrong and tied the game at 2.

Miami could not answer in the bottom of the inning, stranding Adrian Del Castillo at first after a two-out single to left, sending the game to extra innings.

DiMare turned to Alex McFarlane on the mound, who had been lights out in four innings of work over two previous outings. But the freshman right-hander gave up a solo homer to Kirby McMullen on his second pitch of the night, putting Florida ahead for the first time all game.

The Gators added on in a big way, scoring five runs after batting around in the 10th inning to take a 7-2 lead with three outs to go in the game.

Miami refused to go down without a fight, as JP Gates and Gabe Rivera opened the frame with consecutive singles. Alex Toral, who homered in the second inning off of Florida starter Jack Leftwich, drove in Gates with a sacrifice fly.

“He’s a very important guy on our team, being a two-way guy,” DiMare said of Gates, who has not allowed a run in four innings of relief this season. “He’s done well. He’ll continue to be thrown in that role, in somewhat of a late-inning guy. …He’s still swinging the bat. We moved him up in the lineup and he got a couple hits today.”

Isaac Quiñones followed with a pinch-hit single that put runners on second and third after an error by Austin Langworthy in left field. Miami added another run when pinch hitter Luis Tuero grounded out to shortstop, pushing home Rivera to make it 7-4.

After Jordan Lala walked on four pitches, the tying run stepped up to the plate in Anthony Vilar. But the sophomore shortstop flew out to left field to end the Canes’ comeback attempt.

Miami and Florida meet Sunday in final matchup of the three-game series. Sophomore right-hander Slade Cecconi will take the mound for the Hurricanes opposite freshman left-hander Hunter Barco. First pitch is set for 1 p.m.