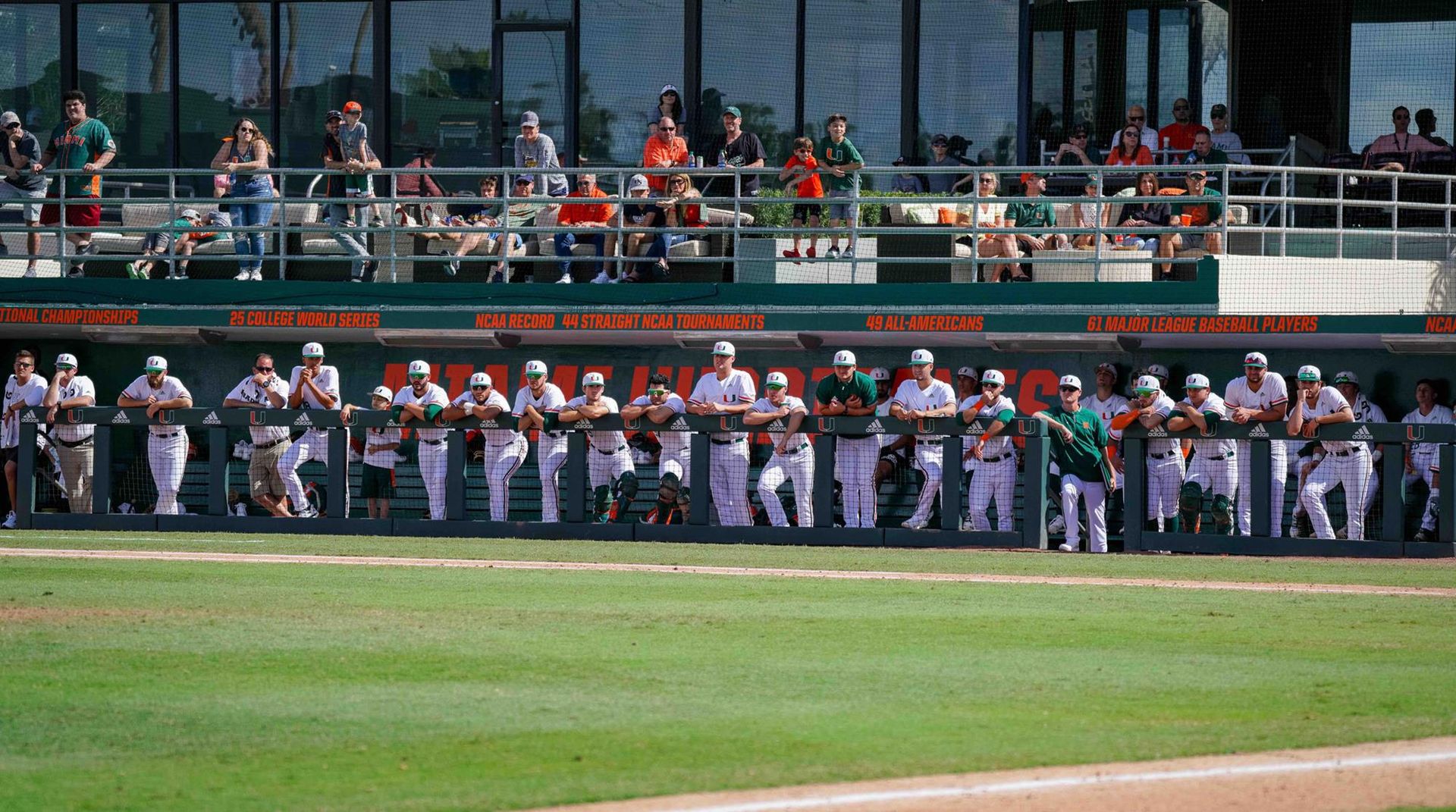 CORAL GABLES, Fla. – The Miami Hurricanes made a late push, but could not complete a comeback attempt Sunday against the rival Florida Gators.

The top-ranked Canes (4-3) got within a run late in Sunday’s series finale, but No. 2 Florida (8-0) held on to complete a sweep before 3,554 fans inside Alex Rodriguez Park at Mark Light Field.

“We got swept last year here against NC State and I thought we did a pretty good job of bouncing back,” Miami head coach Gino DiMare said. “This team is going to have to learn to do that.”

After two games in which offense was hard to come by, the Gators got on the scoreboard in the top of the first. Designated hitter Jordan Butler started a rally with a one-out double and reached third on a passed ball. Jacob Young pushed him home on an RBI single through the left side and Nathan Hickey’s fielder’s choice with two outs sent home Kirby McMullen to give Florida starter Hunter Barco a 2-0 lead before he took the mound.

Florida added on in the second, as shortstop Josh Rivera opened the inning with a solo homer to left field. The three-run lead gave Barco room to work and the freshman lefty impressed over the opening third of the game. Barco tossed three no-hit innings, allowing just one base runner on a walk to Gabe Rivera in the bottom of the second.

Miami got something going against Barco in the fourth, as Tony Jenkins led off the inning with a walk and Adrian Del Castillo followed with a single that marked the first hit of the afternoon for the Canes. With runners at the corners and no outs, Raymond Gil lined to right and drove home Jenkins with a sacrifice fly that cut into the Florida lead, 3-1.

But the Gators answered in the top of the fifth with their second homer of the game off Miami starter Slade Cecconi. Jud Fabian opened the inning with a solo shot to left that brought Florida’s lead back to three runs. Cecconi allowed four runs on four hits over five innings, striking out seven Gators.

Miami loaded the bases against Barco with two outs in the bottom of the fifth, but the left-hander froze Gil on a breaking ball to record his sixth strikeout of the game and strand the bases loaded.

“It’s always disappointing to get swept, especially at home, Gil said. “We felt like each game could’ve gone either way. We just didn’t get the clutch hit or make a play or put somebody away at the right moment, and they did. We have to build on that and we have a long season.”

Barco faced one more batter on Sunday, striking out JP Gates to start the bottom of the sixth. The freshman finished the day allowing one run on two hits over 5.1 innings, striking out seven batters to earn his first career win.

The Canes clawed within one run in the bottom of the eighth, when Gil got some redemption with a two-run homer to left field off of reliever David Luethje. Florida turned to lefthander Ryan Cabarcas and he retired the next three batters to hold on to the Gators’ 4-3 lead.

“We’ve got to bounce back,” Gil said. “We know we have to keep working and this will all be fine by June,” Gil said.

Florida responded with a run in the top of the ninth, as Rivera singled up the middle on a 3-2 pitch from Jake Garland to drive home Young and give the Gators some breathing room, 5-3.

Cabarcas tossed a scoreless bottom of the ninth to secure his first save and close out the victory for Florida.

“Bottom line is they got a lot of hits when they need them, we didn’t,” DiMare said. “We were 1-for-18 over the entire weekend with runners in scoring position. We seemed to not ever get the big hit and it seemed like they got them. …The bottom line is we got a long way to go. Thank god it’s early in the season. We need to use this as a learning lesson, see the things we need to work on.”

Miami is back in action Wednesday against USF. First pitch inside Alex Rodriguez Park at Mark Light Field is scheduled for 3 p.m.