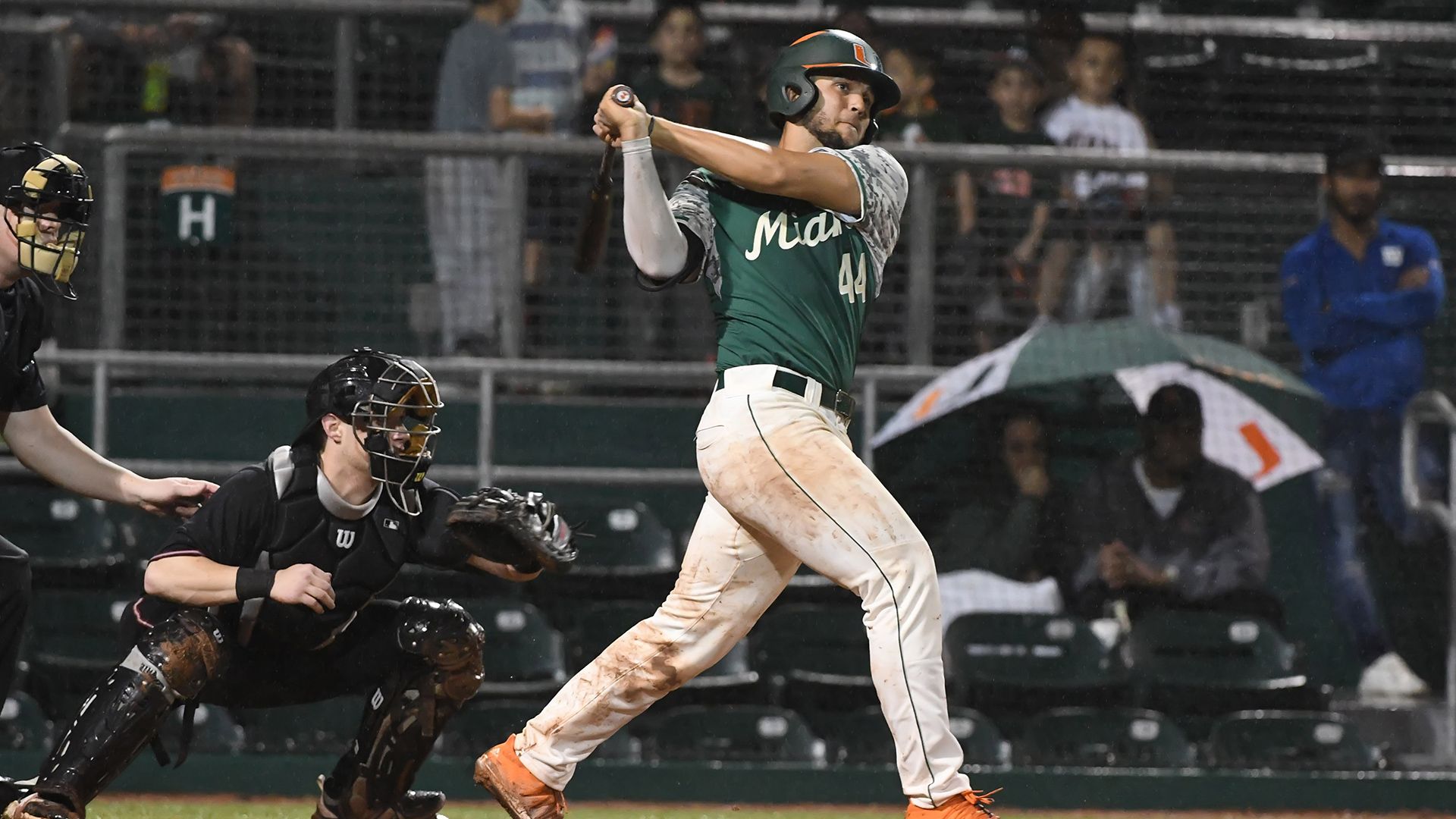 CORAL GABLES, Fla. – Only the rain could slow the Miami Hurricanes in Game 2 of their three-game set against Rutgers, with the Canes claiming an 8-2 victory in a game that was played over the course of two days due to inclement weather.

Preseason All-American Adrian Del Castillo turned in a 3-for-4 performance with a pair of home runs and three RBI to lead a four-homer showing by the hometown Hurricanes, while junior right-hander Chris McMahon picked up the win after a strong start to open his 2020 campaign.

Del Castillo belted a two-out solo homer to left field off of Rutgers starter Tommy Genuario to get Miami’s bats going in the bottom of the first inning.

Rutgers mounted a two-out rally in the top of the third against McMahon, as Mike Nyisztor evened the game at 1 with an RBI double down the right field line that pushed home Kevin Welsh. Richie Schiekofer gave the Scarlet Knights a 2-1 lead with an RBI single to right, as Nyisztor slid into home just before Del Castillo could apply the tag.

The Rutgers lead would not last long, as Tony Jenkins led off the bottom of the third with a base hit to left and Del Castillo followed with a two-run blast down the right field line that put Miami back on top, 3-2. The two-run blast gave Del Castillo his second career multi-homer performance and gave the sophomore the game-winning hit for the second straight game.

McMahon settled in after the third, putting up three scoreless innings to close out his night allowing two runs on five hits over six innings and striking out nine batters – one shy of his career-best 10 set on March 2, 2019 against UMBC.

Miami put the game away for good in the seventh, with Del Castillo leading off the inning with a double and Gabe Rivera crushing a grand slam off right-hander Steven Acosta to put the Canes ahead by five, 7-2. Rivera’s grand slam was the first by a Hurricane since he hit one on April 10, 2019 at FGCU.

Shortly after Rivera’s grand slam, the game was halted due to inclement weather. The contest resumed Sunday at noon and Miami designated hitter JP Gates wasted little time waking up the fans inside Alex Rodriguez Park at Mark Light Field, belting an opposite filed solo homer on the second pitch he saw from right-hander Matt Ciccone to extend the UM lead to six.

Freshman right-hander Alex McFarlane made his Miami debut in the top of the eighth and picked up three strikeouts over two scoreless innings to wrap up the victory.