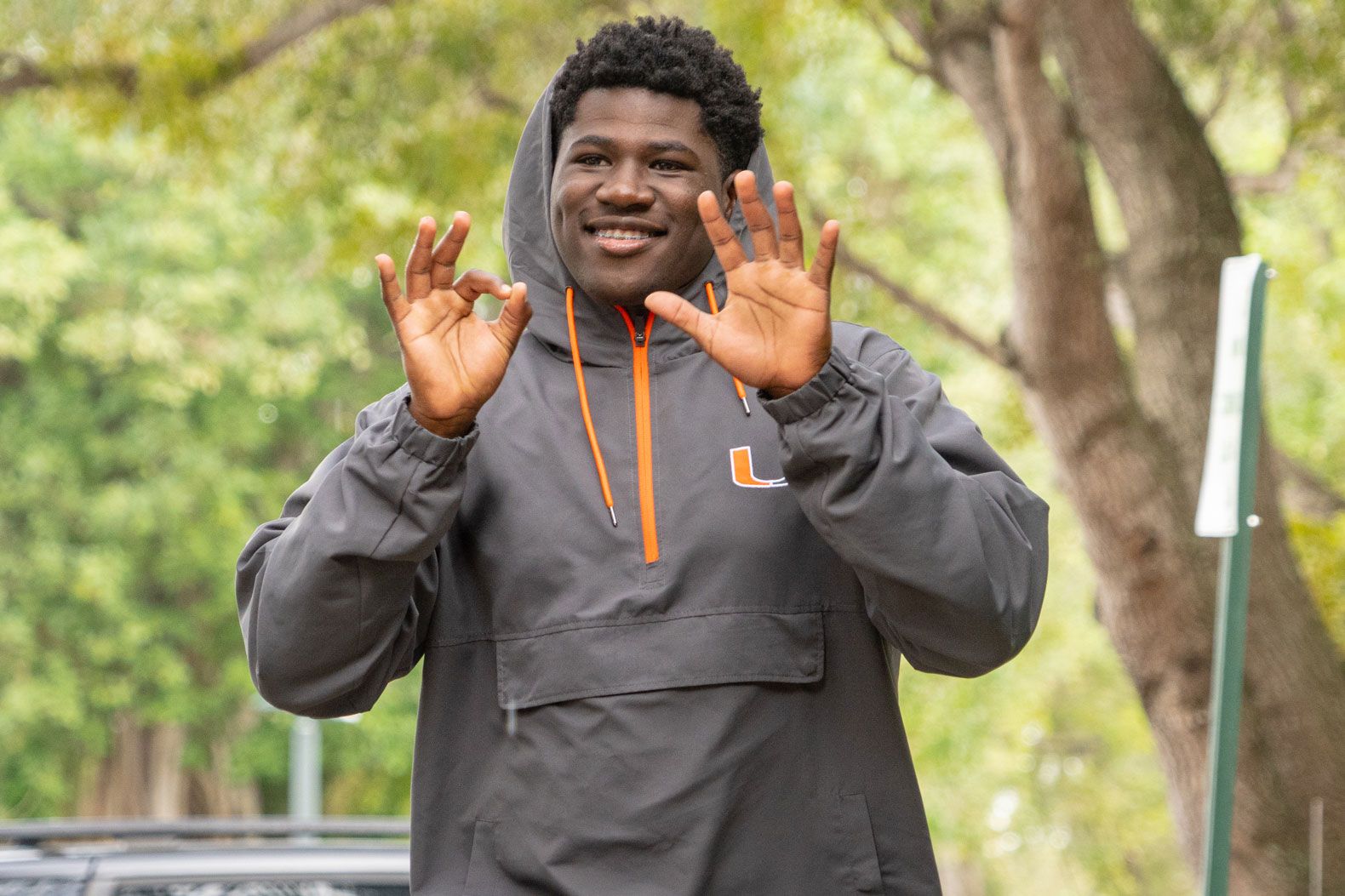 Ready to Make an Impact

CORAL GABLES, Fla. – They spent the better part of the weekend learning their way around Miami’s campus, outfitting their new dorm rooms and saying goodbye to their parents.

Then Sunday evening, they walked into their first team meeting, sat with their teammates and officially, became the 14 newest members of the Hurricanes football program.

It was, for Miami’s mid-year enrollees, a whirlwind that still hasn’t felt quite real.

“I still feel like I’m here for a camp or something. It hasn’t really sunk in yet,” smiled offensive tackle Jalen Rivers, a freshman who joins the Hurricanes as a four-star prospect out of Oakleaf High in Jacksonville. “We’ll see how it goes, but so far, it’s been great. Honestly, I’ve been looking forward to this day for a long time. I’m excited to be a Cane and I’m ready to work.”

The Hurricanes, to be sure, are happy, too, to have Rivers, 12 of his fellow 2020 signees and graduate transfer kicker Jose Borregales already on campus. Over the next few days, the group will go through Miami’s spring orientation process before beginning offseason workouts.

They’ll meet with their coaches, get their physicals, learn their way around the weight room and football facility and early Wednesday morning, get their first real taste of college football life when they go through their first session with David Feeley, the Hurricanes’ Director of Strength and Conditioning.

And in ways big and small, they’ll look to not just merely find their way, but make an impact at a program eager to move forward after a challenging 2019 season.

“Everyone here has the same goals and our mentality right now is to compete and make this the best team it can be,” said freshman running back Donald Chaney Jr., a U.S. Army All-American who rushed for 4,511 yards and 60 touchdowns during his five-year career at Miami’s Belen Jesuit. “That’s everybody’s goal right now. That’s the mindset of all the recruits coming in, whether it was coming in now or coming in later this summer. We’re all on the same page. We’re all hungry. We’re all trying to eat … And knowing we have everyone coming in strong, everyone coming in right, we know we’re going to be ready for this.”

Added linebacker Tirek Austin-Cave, who totaled 148 tackles and 11 sacks last season at New Jersey’s Camden High School, “This is the class that’s going to get us going in the right direction because of the passion we have for the game. We feel what the program can be. 2017 was a great season and I don’t think we’re too far from being in that position again. We just can’t wait to get in the lab and go to work for this program.”

While getting accustomed to college classes and going through offseason workouts will be their immediate priorities in the coming weeks, soon enough, Miami’s early enrollees will dive into spring practices and it’s there where they’ll truly start to get ahead of the curve, especially as the Hurricanes start working in new offensive coordinator Rhett Lashlee’s up-tempo system.

“It’s massive to have so many of them here early, especially when you look at the amount of competition we want to have for spots in the fall,” coach Manny Diaz said. “Offensively, you’re learning a new system, so it’s great to have your quarterback [Tyler Van Dyke] here. It’s great to have your two running backs [Chaney and Jaylan Knighton] here, and three wide receivers [Michael Redding III, Xavier Restrepo, Dazalin Worsham]. It’s great to have two offensive linemen [Rivers and Chris Washington] here and a tight end [Dominic Mammarelli].

“And defensively, we had some turnover off last year’s defense, so again, to get some defensive ends [Chantz Williams], some linebackers [Austin-Cave and Corey Flagg], guys in the secondary [Keshawn Washington] … at all the stops along the way, you’ve got guys that are not just here to learn what college is about, they’re here to compete for big roles this fall.”

That competition and the possibility of earning early playing time are two of the major reasons many of the youngest Hurricanes said they were willing to bypass the final semesters of their high school careers and become mid-year college enrollees.

They saw the impact players like Shaquille Quarterman, Michael Pinckney and Zach McCloud made when they made similar decisions four years ago.

Now, the freshmen say, it’s their turn to step up and they believe they’re ready for what’s next.

Added Flagg, “It means a lot to know that I have the opportunity to get out there and play, for the city, for the school, for the program. I’m ready to represent. I wish the season could start tomorrow because, man, I’ve been waiting for this. It’s why I came in early. I want to get a jump-start an get the program rolling. … We don’t care about last season. That’s the biggest thing. We’re a new team and I can’t wait to show the world what we’ve got and show the world Miami football. We’re ready. Trust me. We’re ready.”