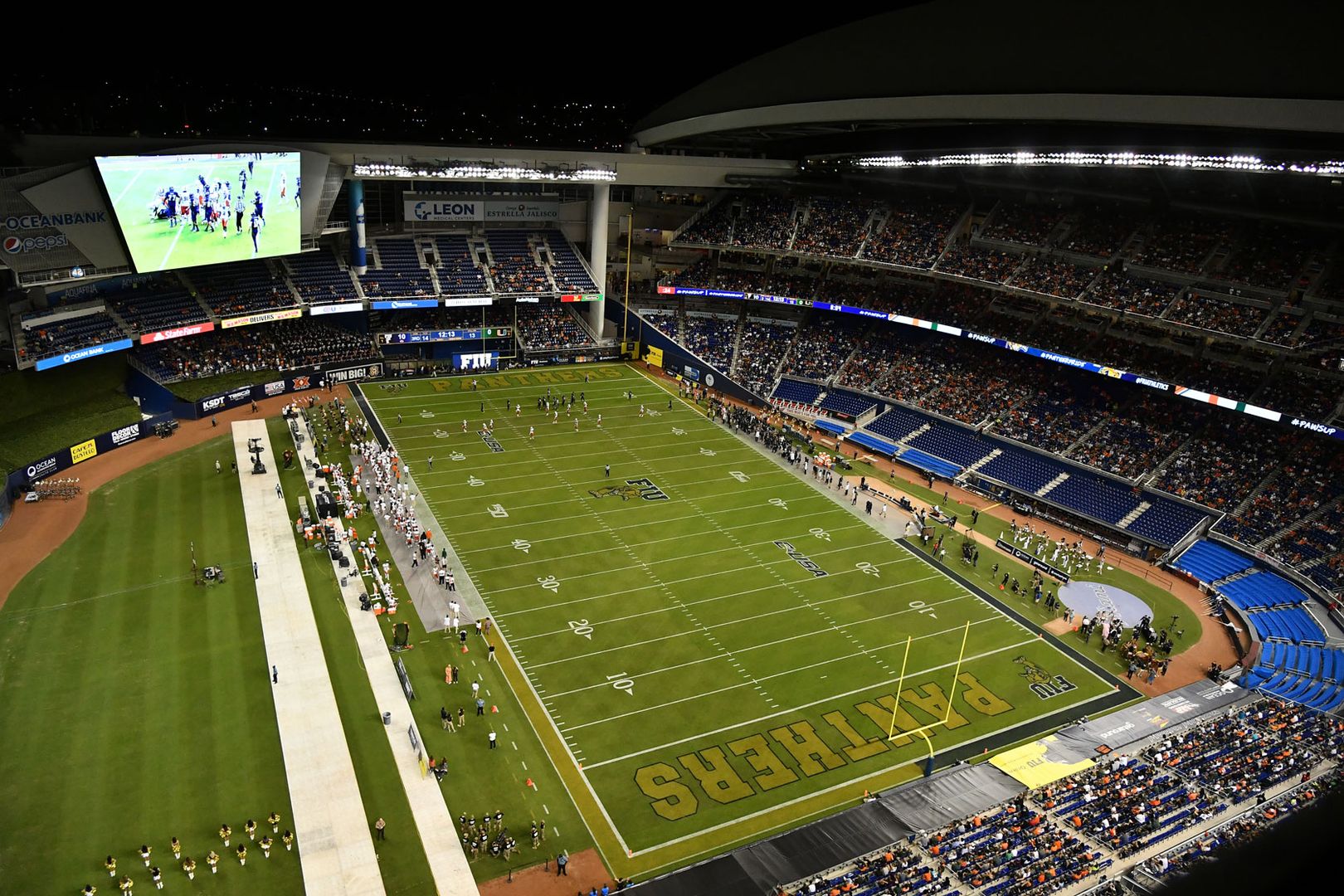 The host Panthers forced three turnovers and held the Hurricanes scoreless for nearly three quarters, building a 20-point lead before Miami battled back to cut the FIU advantage to six points. But a late touchdown by Anthony Jones sealed the Panthers’ first victory over the Hurricanes in program history.

“Obviously a very, very dark night,” head coach Manny Diaz said. “One of the lowest points ever in this proud program’s history. I take full ownership of that, full responsibility for the way that we played tonight. We did nothing to give ourselves a chance to win the football game. Turnovers, penalties, red zone, third down defense, the things that good football teams do, we could not do. We had challenged our guys all week. We had talked about how we had played off a bye before. We talked about how we played in the Central Michigan game. Obviously the lesson was not taught and that goes on to me. It just didn’t happen and I’ve got to take the responsibility for that.

“What I did tell the guys in there is two years ago, Troy went to Baton Rouge and beat LSU, who right now is the number one team in the country,” Diaz said. “So things can change, but it needs to change. It can happen, but it’s got to happen within and it’s got to start with myself and start with the coaching. We’ve got to do a lot better job of coaching our guys and we are so fortunate that we have another opportunity in seven days up in Durham against Duke.”

The groundwork for FIU’s upset victory began early in the opening quarter, as Miami quarterback Jarren Williams was picked off by Stantley Thomas-Oliver and the interception was returned to the Miami 18. But the Hurricane defense answered the sudden change and limited FIU to a 29-yard field goal by Jose Borregales that gave the Panthers a 3-0 lead with 10:08 left in the first

The Panthers added on to their lead on their next possession, driving 80 yards to take a 10-0 lead after a 29-yard touchdown pass from James Morgan to Shemar Thornton.

Miami appeared poised to answer with a scoring drive of its own, as the Canes drove down to the FIU 1 and went for it on fourth-and-goal. But Williams was stuffed for no gain and the Panthers kept Miami off the scoreboard with a huge goal line stand.

“This is a tough one to swallow,” Williams said. “We’ve just got to keep moving forward and we’re going to stay together as a team and focus on our next opponent. We hate losing more than anything in the world. That’s the worst feeling in the world. I can’t even explain it.”

The Canes drove deep into FIU territory again on their next possession and, once again, the Panthers held firm and forced Miami to turn the ball over on downs. Facing a fourth-and-one from the FIU 18, Williams was pressured and his pass to Michael Irvin II fell short of the tight end for an incompletion that gave the Panthers their second consecutive fourth down stand against the Hurricanes.

FIU closed out the half with a 50-yard field goal by Borregales, sending them to the locker room with a 13-0 lead at the intermission.

“They were playing very hard, which we expected,” Diaz said. “I hesitate at times to talk about all the guys because I do think we had a lot of guys who competed very hard and played with a lot of intensity. But I do think there were some guys that we did have to challenge ourselves at half time to make sure that we were matching their intensity. That should never have to be said at half time, but that’s where we were.”

The second half did not start out much better that the first for the Hurricanes, as Williams’ pass intended for Dee Wiggins ricocheted off an FIU defender and popped up in the air before landing in the waiting arms of linebacker Sage Lewis for an interception.

Two drives later, Williams threw his third interception of the game on the first snap of the possession. The redshirt freshman’s pass was intended for Will Mallory, but Jamal Gates jumped in front of the Miami tight end and picked off the pass and returned the interception for 16 yards to give FIU possession at the Miami 28.

“Those guys were aggressive,” Williams said. “They were biting on a lot of our routes coming down. It’s really on me. It starts with me. I’ve got to be able to see that and find the open guy and get him the ball. I’m going to go back and watch the film because I know there are answers. I know there are answers all over the field. I’ve just got to be able to understand what they’re giving me and find the open guy.”

Despite Miami pushing FIU back for eight yards, the turnover led to three more points as Borregales drilled a season-long 53-yard field goal to put the Panthers up, 16-0, with 9:02 left in the third quarter.

“It’s hard when you put the defense in those bad positions when you turn the ball over,” Williams said. “It makes it really hard. It was a new week. It felt like a totally new week. You can get beat on any given day, no matter who you play. Everybody puts on pants. We’ve just got to come better prepared and ready to play.”

The Hurricanes got on the scoreboard late in the third quarter, as Camden Price kicked a 22-yard field goal to cut FIU’s lead to 13 points, 16-3, with 1:52 remaining in the quarter.

A pair of unsportsmanlike conduct penalties on Miami gave FIU a 30-yard boost that helped propel the Panthers to another scoring drive. Morgan hit a wide-open Tony Gaiter IV for a 13-yard passing touchdown that put FIU ahead by twenty points with 11:04 remaining in the game.

Facing a fourth-and-10 from the FIU 30, Williams found Mallory over the middle of the field for a 16-yard gain to keep the drive alive. One play later, Cam’Ron Harris barreled into the end zone from 14 yards out for the Hurricanes’ first touchdown of the night. Harris’ touchdown run brought the Canes within two scores, 23-10, with 8:07 on the clock.

Miami converted another fourth down attempt on its next possession, with Williams hitting Jeff Thomas for a 19-yard gain to the FIU 35. One play later, he connected with Mark Pope for a 35-yard touchdown that put Miami within six points, 23-17, with 3:10 left to play.

The Canes could not recover their onside kick and FIU started its possession on the Miami 42. Two plays later, Anthony Jones sprinted 37 yards for a touchdown that brought the lead back to 13 points with 2:17 remaining.

Miami added a three-yard touchdown from Williams to Wiggins that brought the Hurricanes within six, 30-24, but could not recover the onside kick with 31 seconds to go and the Panthers took a knee to end the game.

“It’s a feeling of disappointment,” said linebacker Shaq Quarterman, who led Miami with 12 tackles. “I can only speak for the defense and I know that, as a defense, we didn’t show up ready to play like we have in the previous weeks. We started very slow. We fought some adversity and I did like the way that our guys battled back, but we ultimately ran out of time.”