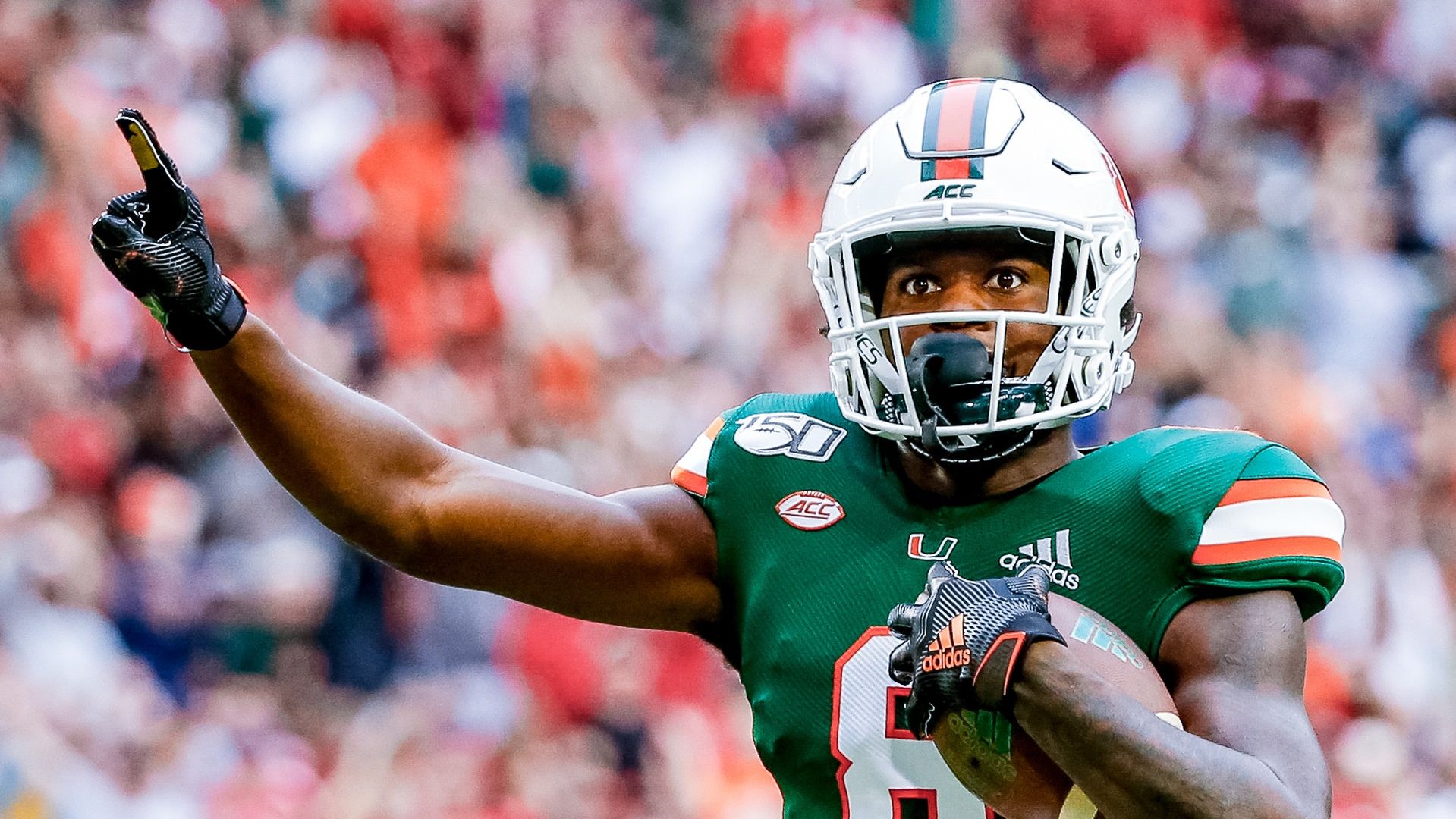 Williams set a UM record with six passing touchdowns, while a loud and proud 53,111 Miami fans witnessed the Hurricanes (6-4, 4-3 ACC) tie a school record for points scored in an ACC game and become bowl eligible for the seventh consecutive season.

“I thought today was great for our players and for our fans,” head coach Manny Diaz said. “They got to see, in my mind, more of a glimpse of what is coming. They got to see more on offense, explosive plays, run-game downhill, getting the ball to our playmakers, all of the things that we said that we wanted to do. We went through some hiccups with guys being in and out of the lineup. That [today] looked like the Miami Hurricane offense. It needed to because Louisville does an unbelievable job running the football, they just do. It’s a hard running-game to try to simulate in practice. We obviously had mixed success stopping it but to have an offense that you have confidence in that says ‘hey, you don’t have to be perfect today, defense, we got this’ was fantastic for us.”

“I think bittersweet is the only word I can use right now,” Quarterman said. “I’ve been trying to hold it back. If I run into Pat Bethel I know he’s going to break the seal and then we’re all going to cry. So, I’ve been doing all right with that so far, but it’s just been real powerful, just looking at the fans that showed up. And I think that it’s just been a really special journey for us. I just really do.”

Williams, who completed 15 passes for 253 yards and six TDs, connected with Mike Harley for a 41-yard gain that went for one of five first downs in the 92-yard scoring drive that ended with a five-yard DeeJay Dallas rushing touchdown, putting the Hurricanes ahead, 7-0, less than six minutes into the game.

“It’s really why you come here,” Williams said of his record-setting performance. “You come to The U to set records. You come to this place to do something that no one else has done. So, just coming here, I expected to do something different, to break records. That’s the goal. So, I really just keep my head down and keep grinding and good things happen.”

On their next drive, the Cardinals evened the game at seven. Quarterback Micale Cunningham found receiver Tutu Atwell and the sophomore got a block to help free him up for an 80-yard touchdown.

But the stalemate would last just one play, as Williams hit Dee Wiggins on a deep post for a 67-yard touchdown that put Miami back on top, 14-7, with 6:49 remaining in the first quarter.

Miami’s defense built off the momentum from the touchdown by forcing a three-and-out, with Pinckney getting a sack on second down to help put the Cardinals into third-and-20, and K.J. Osborn returned the punt 38 yards to the Louisville 14. One play later, Williams hit Dallas on a 14-yard screen pass for a touchdown that put the Canes ahead by 14.

“It was good just to get a win,” Pinckney said. “We came into the game knowing all of the emotions that were going to be behind the game and it was big that we came into the game with focus. I think that it was a great job from the older guys and all the leaders on the team. We just rallied everybody and let them know that it’s not going to be as fun if we don’t get the win. We just did our job tonight.”

Louisville would not let the quick-striking Canes’ offense dampen its mood, responding with a 10-play, 80-yard scoring drive that ended with a six-yard touchdown on a play action pass from Cunningham to Earn Pfeifer that cut the Miami lead to seven, 21-14.

Cam’Ron Harris opened the next Miami possession with an explosive 46-yard run that kicked off a six-play scoring drive ending in a 10-yard touchdown catch by Wiggins. The catch gave Wiggins, who finished with a career-high 85 yards, the first multi-TD game of his career and put Miami back on top by 14 points, 28-14.

Miami added another touchdown through the air in the second quarter, with Williams connecting with tight end Will Mallory for a 17-yard touchdown that gave the Canes a 21-point advantage as rain fell inside Hard Rock Stadium. The touchdown was Williams’ fourth passing TD of the game, setting a new career high for the redshirt freshman quarterback.

The Hurricanes’ defense thwarted a Louisville drive that had gone deep into Miami territory, when DJ Ivey picked off Cunningham in the end zone on first-and-goal from the 18 to protect the 35-14 lead just before half time. Miami’s defense totaled 14 tackles for loss, three sacks and two interceptions in Saturday’s win over Louisville.

Miami’s 35 first-half points were tied for their second-most against an ACC opponent in a single half (vs. Duke, 10/18/2008) and their most ever in a first half versus an ACC opponent.

But the Hurricanes’ offense was not done yet, marching 66 yards on their opening drive of the second half to reach the end zone for the sixth time in the game. Receiver Mike Harley, who finished with six catches for a career-best 116 yards, broke two tackles before scoring a 31-yard touchdown on Williams’ fifth touchdown pass of the game, tying the UM record for passing touchdowns in a single game.

“It was just perfect timing, all the hard work paying off,” Harley said. “It’s my brothers that are behind my back, my coaches that believe in me and trust in me to put me in the predicament to start to play. It’s Jarren delivering the balls and me making the play. I mean, I do it every day in practice, so it was just translating it over to the game.”

The Cardinals continued to fight on offense, as running back Javian Hawkins ran for 69 yards on two plays before Cunningham scored on a one-yard run to bring the Miami lead back to 21, 42-21.

Another Miami senior made a big play on punt coverage, as Jimmy Murphy recovered a fumble by Atwell to give the Canes the ball on the Louisville 25. Murphy brought the crowd to its feet and caused the Canes’ sideline to erupt with joy as he donned the Turnover Chain for the first time in his career.

“First off, I just want to start by thanking the team for coming together this whole week and just preparing the way they emphasize like going out with these seniors, giving them the best shot they can, giving them the a chance to win,” Murphy said. “So my hat goes off to all my teammates that just worked all hard this week. The chain is amazing. I didn’t even know I had it. I was just filled with energy. And when they brought it out, I’m like ‘oh my god that’s mine,’ so I just like took it. And I forgot I was wearing a helmet and I didn’t break it, I hope I didn’t.

“What can you say about Jarren Williams,” Diaz said. “Six touchdown passes, I think that is an ACC record and a school record and that leads to us with 52 points, which I think is the most we’ve ever scored in an ACC game. It’s starting to look the way that we want it to look. We want to be a team that gets better as the year goes on and we are hoping that this is now what we can be going forward.”

Miami tacked on three more points to increase its lead to 31 when Camden Price split the uprights from 24 yards out to make it 52-21 with 32 seconds left in the third quarter. The kick was historically significant, as it tied a Miami record for the most points scored in an ACC game.

The Hurricanes forced their third turnover of the game on Louisville’s next possession. Al Blades, Jr., who blocked a punt earlier in the game, intercepted quarterback Evan Conley at the Miami 16 and the sophomore donned the bejeweled Turnover Chain when he returned to the UM sideline.

Louisville never quit, putting together an 86-yard scoring drive midway through the fourth quarter that ended with a 58-yard touchdown run by Hassan Hall. Placekicker Ryan Chalifoux missed the point after attempt and Miami’s lead was 25 points, 52-27.

“The goal of this team is to get Shaq Quarterman, Michael Pinckney, Romeo Finley, Pat Bethel, Rob Knowles, those guys, to get them on a podium because they deserve it,” Diaz said. “The leadership that we’ve had here the last three weeks when it could have gone either direction and for those guys to lead this team the way that they have, and there are others, Trevon Hill, K.J. Osborn, Jimmy Murphy. To get those guys on a podium is what they deserve for what they’ve done for the University of Miami Hurricanes these last few weeks.”