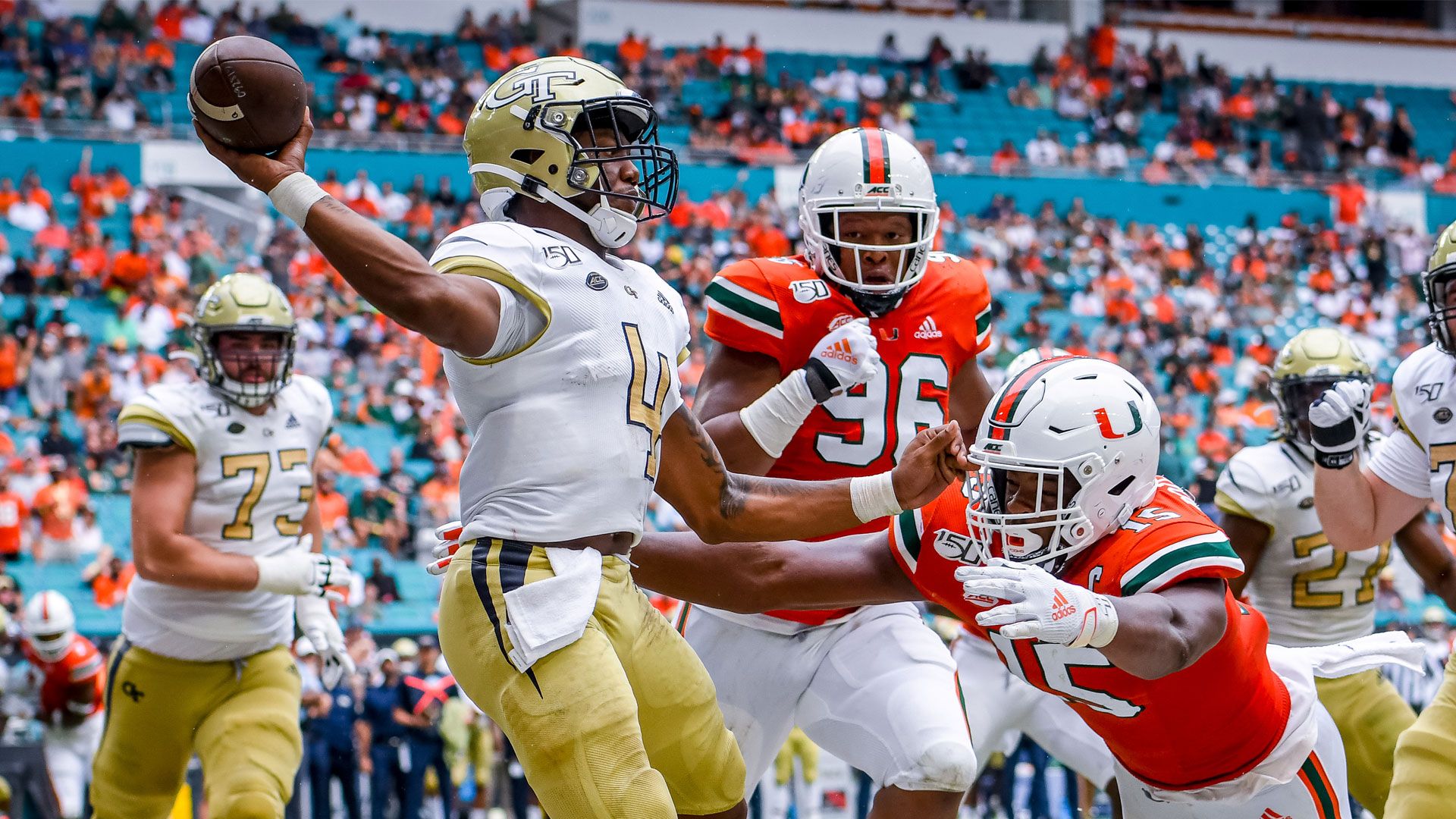 MIAMI GARDENS, Fla. – Four quarters weren’t enough on Saturday at Hard Rock Stadium, as the Georgia Tech Yellow Jackets came away with a 28-21 overtime win over the Miami Hurricanes.

Knotted at 21 at the end of regulation, Miami won the coin toss and elected to play defense first. Three plays later, Georgia Tech’s Jordan Mason barreled into the end zone from one yard out after an impressive 22-yard run that set up the go-ahead score, 28-21.

The Hurricanes (3-4, 1-3 ACC) needed a touchdown to keep the game going, but could not convert on fourth-and-4 from the GT 8. N’Kosi Perry hit Brevin Jordan for what appeared to be a five-yard gain, but the play was reviewed and the ball was spotted just shy of the GT 4.

Officials called for a measurement and Jordan was marked just inches shy of the first down marker, ending the game and giving the Yellow Jackets (2-5, 1-3 ACC) their first ACC win of the season.

“Obviously very disappointed in the result today,” head coach Manny Diaz said. “Certainly had more than enough chances to win this football game. Some mistakes early on gave them hope, gave them life. And to their credit, they did a good job possessing the football in the second half, wearing us down. We will stay unified in our locker room, we will stay together, go to Pittsburgh next week and go compete the way that Miami Hurricanes compete.”

A crowd of 54,106 witnessed a wild game between the Hurricanes and Yellow Jackets Saturday afternoon that featured missed kicked, blocked kicks, trick plays and odd plays.

Georgia Tech’s defense capitalized on a big blitz early in the first quarter, sending six rushers after Perry on third-and-8 from the Miami 11. With an onslaught of Yellow Jackets pressuring him, Perry was sacked and fumbled the ball in the end zone before Ja’Quon Griffin fell on the loose ball for a touchdown that gave GT a 7-0 lead just two and a half minutes into the game.

The lead would not last long, as Miami answered with an 11-play scoring drive capped by a one-yard rushing touchdown by Perry to even the score at 7-7.

The Hurricane defense flexed its muscles on the ensuing Georgia Tech possession, forcing a three-and-out after redshirt senior Trevon Hill sacked GT quarterback James Graham for a seven-yard loss on third down.

“We just got to stick together for the next game,” Hill said. “We got to focus on Pitt because they aren’t going to feel sorry for us. We got to go out there and dominate them guys, prepare well, and execute the way we have to.”

Fellow redshirt senior K.J. Osborn returned the punt 52 yards to the GT 13. One snap later, he hauled in a touchdown pass from Perry that gave Miami a 14-7 lead with 4:04 remaining in the opening quarter.

The Yellow Jackets turned to a trick play to even the score at 14 just before the end of the first quarter. Punter Pressley Harvin III faked a punt and threw a 41-yard touchdown to a wide-open Nathan Cotrell streaking down the Georgia Tech sideline.

The offensive highlights continued for Miami early in the second quarter. The Canes took advantage of excellent starting field position, opening their first possession of the quarter on the GT 32. Cam’Ron Harris rushed for 13 yards before catching a 19-yard touchdown from Perry that put the Hurricanes back on top, 21-14.

After forcing another GT punt, Miami looked to add to its lead. Harris continued to run hard, while Mike Harley held on to a pass over the middle after taking a big hit to convert a third-and-9 from the 37. The Yellow Jackets forced Miami to try a 34-yard field goal, but Miami’s Turner Davidson missed wide right and GT took over possession on its own 20.

“We lost, but we lost as a team and we’re going to win as a team,” Harris said. “We just took a tough loss today, that’s all. We’re going to bounce back next week.”

The missed kick ignited the Georgia Tech sideline and the Yellow Jackets carried that momentum shift into their drive, marching 80 yards to tie the score at 21 on a 35-yard touchdown pass from Graham to Ahmarean Brown with 53 second left in the half.

After losing DeeJay Dallas to injury in the first quarter, Miami turned to Jarren Williams at quarterback two plays into the third quarter after Perry took a big hit at the end of a nine-yard run to the Miami 42. The redshirt freshman guided the Canes to the GT 25, but was sacked for an 11-yard loss on third-and-10 that pushed Miami out of field goal range.

Miami’s Jimmy Murphy downed an impressive punt by Lou Hedley at the GT 4, but the Jackets’ offense forged ahead to UM territory. Brenton King attempted a 52-yard field goal that split the uprights, but a false start penalty on T.K. Chimedza negated the play and kept the game tied at 21.

Perry returned to action on Miami’s next drive, but Georgia Tech forced a three-and-out that resulted in a career-long 67-yard punt by Hedley that Murphy downed at the GT 5.

The Yellow Jackets were undeterred by the daunting 95 yards between the ball and the goal line, charging to the Miami 19 before the Hurricanes made a pair of tackles for loss before Shaquille Quarterman forced Mason to fumble and recovered the loose ball on the Miami 23 to thwart the GT drive and give the Canes a chance to regain the lead.

“I definitely still see a unified locker room,” Quarterman said. “All losses are tough, especially this one, in the nature that it happened. But make no mistake, the locker room will always stay together. When things negative happen, most people turn [and] they do less; they don’t work as hard as they used to. But I told them and I assured them that when things go wrong, you have to go harder. Because once you leave college, you don’t have the same type of support that you have from the locker room. So, I just encouraged them that when things go wrong the thing is to go harder not to digress in any way.”

One play later Harris burst for a 42-yard gain to the GT 35, eclipsing 100 rushing yards for the first time in his career. The sophomore finished the game with a career-best 136 rushing yards on 18 carries, while adding 31 receiving yards and a touchdown.

“DeeJay went down and I just knew I had to step up, I had to play my A-game,” Harris said. “I had the team on my back, so I had to keep going.”

The Canes marched deep into Georgia Tech territory, reaching the GT 8, but could not put the ball in the end zone. Diaz elected to send kicker Bubba Baxa in to attempt a 27-yard field goal, but the sophomore missed the kick wide right and the game remained even at 21 with 5:41 left to play.

Miami’s defense forced a GT punt on their next possession and the Canes’ offense got right to work with 4:03 left on the clock, as Perry hit Dee Wiggins deep for a 50-yard gain to the GT 25. The Hurricanes again reached the Georgia Tech 8, but could not get in the end zone. Turner Davidson entered to attempt a 25-yard field goal with 30 seconds remaining in regulation. The kick was blocked and the game continued on to overtime.

“We have to keep running our stuff,” Diaz said. “Obviously, we made a great throw down the field in a decisive situation to end the game that set us up potentially for a game-winner. We are playing with very little margin of error to win close games and I think that’s what’s obvious tonight. We can’t do anything about it. To get the ball down there close three times and come away with no points [is tough], and really the fourth time is on a sack. We drove the ball inside their 30-yard-line four times and came away with no points. That is the margin for error that I’m talking about that makes you, as an offensive play caller, almost have to call perfect plays, but we just had to power through that. That’s just our situation.”