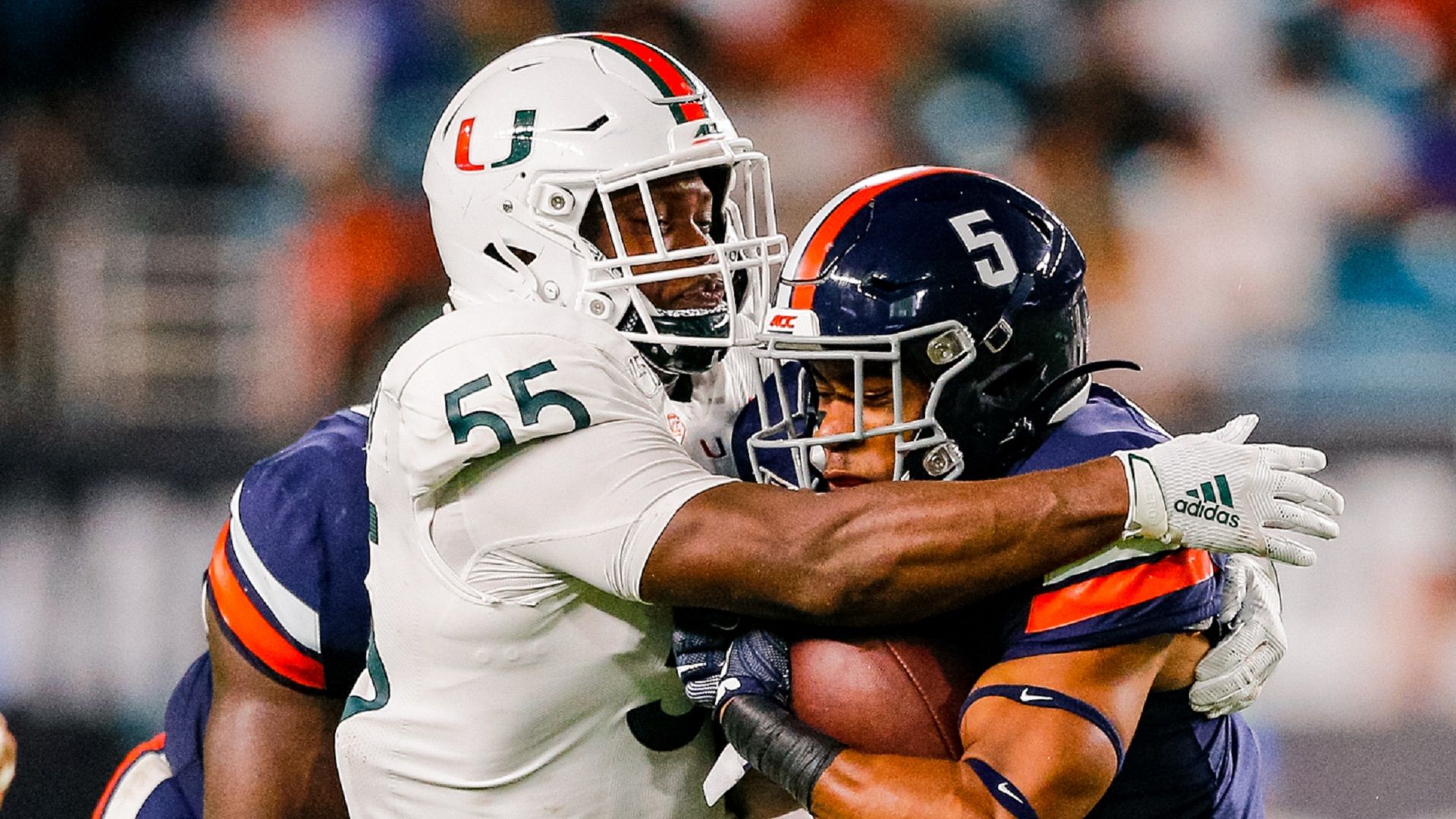 MIAMI GARDENS, Fla. – The Miami Hurricanes protected home field and came away with an upset victory over No. 20 Virginia, 17-9.

The Canes entered Hard Rock Stadium eager to avenge their loss at Virginia from a year ago and did exactly that, leading wire-to-wire to earn their first ACC win of the season and improve to 3-3 overall in 2019.

“Obviously, I’m extremely proud of our football team,” head coach Manny Diaz said. “It was a very hard-fought win, which is what we expected it to be. We had talked all week about how strong our culture was, even on the backs of some of these losses to start eth season. If we trusted in [the culture] and continued to nurture it, the results would start to come. This game was a testament to that because we knew that it was going to be a game where persistence and being relentless was going to be the key.”

A crowd of 54,538 witnessed Miami’s defense keep the Cavaliers out of the end zone for four quarters, helping the Hurricanes earn their first victory over a ranked opponent since downing No. 24 Pitt, 24-3, on Nov. 11, 2018.

“Defensively, the toughness of your defense is defined by how you play in the red zone; the red zone and the goal line,” Diaz said. “The closer the ball is to the goal line, the more important it has to be to you. When they got down there close, and to not let them score a touchdown with all the snaps they had inside the 14-yard line, it had to be almost double digits, is simply a mindset. I was very, very proud of the way that they responded.”

Miami wasted no time getting its offense going, marching 78 yards in an 11-play scoring drive. A screen from N’Kosi Perry to DeeJay Dallas capped the drive with a 17-yard touchdown pass that put the Hurricanes ahead, 7-0, with 8:55 left in the first quarter.

The Hurricanes’ defense, which held firm over the opening 15 minutes of play, made one of is biggest plays of the first half on the first snap of the second quarter. With Virginia staring at fourth-and-1 from the Miami 24, Gregory Rousseau stuffed running back Wayne Taulapapa for no gain to give the Hurricanes the ball on downs.

“Greg has been coming, and coming, and coming and getting better every week,” Diaz said. “He’s been getting more sound in his assignments in the run game. We’ve been saying this since his first spring when he mid-year enrolled that he had a big-time future ahead of him. What an awesome young man and it’s fun to watch him out there wreaking havoc.”

On its next possession, Virginia moved the ball to the Miami 21 before attempting a 38-yard field goal, but Brian Delaney’s kick was blocked by Pat Bethel and the senior defensive tackle fell on the loose ball to give the Canes possession on their own 22. The blocked field goal was the first by a Hurricane since Jaquan Johnson blocked a kick against Savannah State on Sept. 8, 2018.

The Cavaliers finally got on the scoreboard on the final drive of the first half, converting a key third down when Perkins connected with receiver Hasise Dubois for a 49-yard gain to the Miami 8. The Hurricanes’ defense held Virginia to a 25-yard field goal by Delaney that sent the two teams to the locker room with Miami up, 7-3.

“I just think we were relentless,” Bandy said. “Just, relentless play. The d-line was running after the quarterback. He was scrambling. They were just getting after him and we just kept our eyes on our receivers and like I said, we just did a great job.”

Miami’s defense rose to the occasion again with 6:28 remaining in the third quarter, as cornerback Trajan Bandy recovered a fumble to give the Canes possession on their own 20. UVA’s Mike Hollins was stripped by Miami defensive tackle Jonathan Ford and Bandy fell on the loose ball to earn his first Turnover Chain of the season.

The Canes’ defense was dealt a big blow late in the third quarter, as Amari Carter was ejected for targeting after the junior safety broke up a pass intended for Dubois in the end zone. UVA moved up to the Miami 9 after the penalty, but the Hurricanes limited the Cavaliers to a 21-yard field goal by Delaney that bounced off the right upright before going through to bring Virginia within a point, 7-6, with 14:28 remaining in the game.

But the Hurricanes’ answered back in a big way, as Perry connected with K.J. Osborn on three consecutive passes before the quarterback hit Brevin Jordan on a screen for a 35-yard gain to the Virginia 7. The Cavaliers’ defense tightened up and held Miami to a 19-yard field goal by redshirt sophomore kicker Turner Davidson, but UM still increased its lead to four, 10-7, with 10:06 left to play.

“For Turner Davidson to come in and make the PATs and make that field goal in a very clutch time in the game during the fourth quarter was a huge shot in the arm to our football team,” Diaz said. “So, again, something that all three phases can be very proud of. It’s a very happy locker room right now as you can imagine. Now, we maybe have a little bit of momentum that we can kick on for the rest of our season.”

Virginia got its biggest spark of the game on the ensuing kickoff, as all-conference returner Joe Reed sprinted 72 yards to the Miami 27 to give the Cavaliers their best starting field position of the game.

After Perkins ran for a first down to the Miami 17, the Hurricanes got a huge sack from Rousseau on third-and-10 that pushed Virginia back 10 yards to the 27 before Delaney converted a 44-yard kick that brought UVA back within a point 10-9, with 7:39 remaining in the game.

“It was really a big boost for us but, personally, I never felt like any of us lost any life,” Rousseau said. “Even through those losses, we were always kept coming to practice and working hard. Our demeanor never changed. We were just ready to go get that ‘W.'”

While the defense continually stifled Virginia’s drives, it was time for Miami’s offense to shine and it responded by covering 75 yards in 10 plays to shave 5:08 off the game clock before Perry rushed into the end zone from three yards out to give the Hurricanes a 17-9 advantage with 2:31 to go.

“It meant a lot,” Perry said of the touchdown. “I knew the game wasn’t over but, with the way that our defense was playing, in my heart I just felt like, I knew that we had to win. When we got that touchdown and went up by eight points, I knew that we were going to win the game. I saw a hole, after my first read wasn’t there, and I took advantage of it.”

The Cavaliers made one last effort to drive down and tie the game, reaching the Miami 38 before Bandy came up with a big sack of Perkins for an 11-yard loss that sent UVA back to the Miami 49. Two incomplete passes later, Miami’s victory was complete and the Hurricanes’ sideline erupted with celebration.

“Virginia’s got an outstanding defense and quarterback,” Diaz said. “You can’t say enough about that guy and the plays that he makes. That being said, what changed today is that the team that made the plays in the fourth quarter was the Miami Hurricanes. The way we went down the field twice after obviously not moving the ball very well during part of the game, to go down the field and score twice during the fourth quarter, ultimately was telling in the victory.”