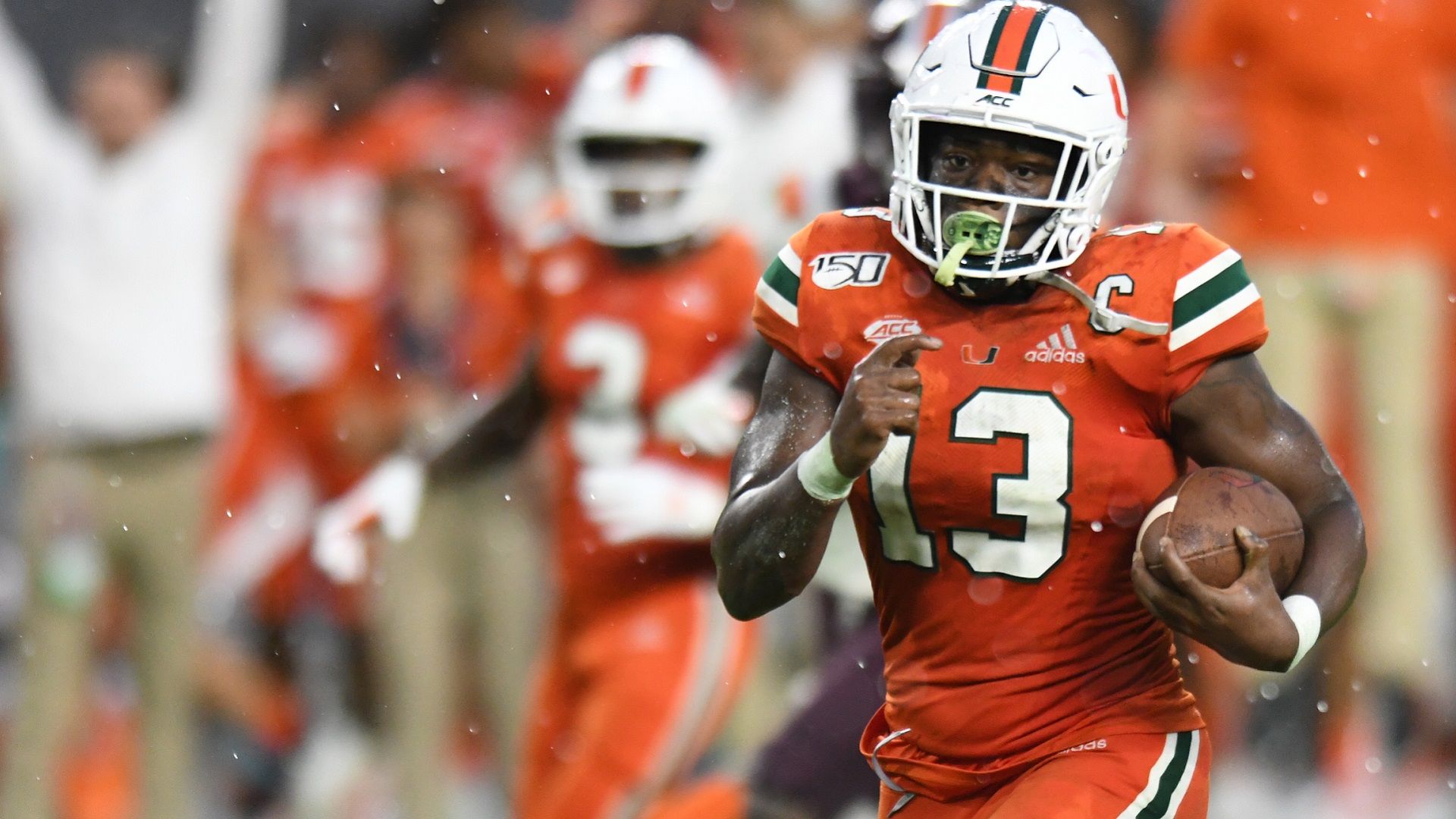 MIAMI GARDENS, Fla. – A resilient Miami squad battled back to erase a 28-point deficit but could not find a last bit of magic late in the fourth quarter, falling to Virginia Tech 42-35.

The visiting Hokies forced five turnovers in the opening half, including four in the first quarter, that helped them jump out to a 28-point advantage before 53,183 fans at Hard Rock Stadium. But Miami clawed back to tie the game late in the fourth quarter before the Hokies regained the lead for good.

“There are a lot of guys that are hurting together,” head coach Manny Diaz said. “There was not one negative word being said from one person to another person. I’ll be very honest that it has been that way all year. No one wanted the start of our season to go the way that it has, but I think the guys respect what they have put into this program. They respect each other and they respect the work that they put into each other. If you looked at our sideline during the fourth quarter of our game, if you look at a guy like DeeJay Dallas making a run like that, that is what breaks your heart as a coach. You want that play to be something that people talk about for years and years to come. That should have been a comeback that gets talked about forever. To get that close; that is just our issue right now.

“It’s easy to look at us and say, ‘Oh, we’ve gone 2-3 and it’s not happening,'” Diaz said. “But this is just a young team that is learning to get over the edge. Look at the three losses. What is it? Is it just that confidence, that thing that will make us do it? Then, when it happens, and we continue to play with the effort and the fight, look out. But no one wants to hear that right now and I’m fine with that. We have enough issues to start. I’m not trying to paint some rosy future. That isn’t what matters right now, but there’s something worth fighting for in there.”

The Canes closed out the opening half on a high note, as Mark Pope caught a tipped Hail Mary pass from redshirt sophomore quarterback N’Kosi Perry for a 38-yard touchdown that sent the two sides to the locker room with Virginia Tech leading, 28-7.

Perry entered the game in the first quarter after starting quarterback Jarren Williams was shaken up and had thrown three interceptions over Miami’s first three drives. The redshirt sophomore provided a spark for Miami, finishing with a career-high 422 yards on 28-for-47 passing with a career high-tying four touchdowns and one interception.

“Somewhat I’m proud,” Perry said. “I wish we would’ve got the win, though. That’s pretty much all I’m worried about right now. I’m not really into the individual stats.”

Miami carried its positive momentum from the heroic Hail Mary into the second half, forcing a punt on VT’s opening drive. Perry then led the Hurricanes on an 88-yard scoring drive that culminated in a six-yard touchdown to tight end Brevin Jordan. The sophomore tight end eclipsed 100 receiving yards for the first time in his career and brought the Canes within two touchdowns, 28-14.

Virginia Tech capitalized on third-and-2 from its own 28 when quarterback Hendon Hooker threw over Miami’s secondary and connected with James Mitchell for a 67-yard gain to the Miami 5. The Hokies’ QB then tossed a five-yard touchdown to Dalton Keene to put VT ahead by 21 with 12:43 remaining in the game.

The Canes answered back with a 10-play scoring drive that ended with a 13-yard touchdown catch by Jeff Thomas, putting Miami back within 14 points with 7:03 left on the clock.

Miami’s defense forced another punt and the Canes marched down field in a minute and 12 seconds to get within six points of Virginia Tech, as Perry and Thomas connected for a 25-yard touchdown and DeeJay Dallas ran in a successful two-point conversion to make it 35-29 with 4:55 to go in the game.

“Like we’ve talked about, it’s one of these data type deals,” Diaz said. “Basically, the notion that you are going on is that you have two shots to get two points, but if you get it the first time, you can kick a PAT and ideally win the game. We didn’t run the 2-point conversion the way we wanted to and it was an insane effort by DeeJay Dallas to get it in there. We had two really unusual end-of-game situations. We had the old ‘down 14, go for two to make it six’, and obviously we have to make the PAT; that is a minimum expectation. That obviously took some wind out of ou sails. They came down and made some great throws and got the ball inside of our 5-yard line and we actually had to run our surrender defense, where we had to allow them to score a touchdown to give our offense the ball.

“All they would have had to do was run the ball, run the clock out, kick a field goal and run out of the locker room, 38-35, winners,” Diaz said. “I thought we executed both of those end-of-game situations very well and, obviously, we had a shot to get the ball into the end zone there at the end of the game. And we completed a Hail Mary. I can’t fault us the last couple minutes, we just put ourselves in such a humongous hole in the first quarter.”

The Hurricanes forced another three-and-out and Miami regained possession on its own 31 with 4:06 remaining in the game. After a seven-yard rush by Perry, Dallas broke multiple tackles before sprinting 62 yards for a game-tying touchdown.

Sophomore kicker Bubba Baxa’s point after attempt ricocheted off the right upright and was no good, leaving the Hurricanes and Hokies knotted at 35-35 with 3:16 remaining in the game.

An unsportsmanlike conduct penalty during Miami’s touchdown celebration forced the Canes to kick off from their own 20 and that allowed the Hokies to return Baxa’s kickoff 29 yards to the UM 34. Third down proved to be pivotal again, as Hooker connected with Keene for 26 yards to the Miami 3. DeShawn McClease rushed for a three-yard touchdown on the next play to put the Hokies back on top, 42-35, with 1:03 left in the game.

A touchback gave Miami the ball on its own 25 and the Canes had one timeout and 75 yards to traverse if they wanted to even the score. On third-and-10, Perry hit Dee Wiggins over the middle for a 20-yard gain to the Miami 45. Two plays later, he found Pope for a seven-yard gain and Miami used its final timeout, stopping the clock with 21 seconds and sitting 52 yards away from the end zone.

Perry hit Wiggins again for a 12-yard gain and found K.J. Osborn for a 16-yard gain two plays later. A VT personal foul moved the Canes half the distance to the goal line to the Hokies’ 10 with five seconds to go. Perry could not connect with Jordan on the next play and had his final attempt batted down to thwart Miami’s comeback attempt and give Virginia Tech the victory.

“As a coaching staff, we couldn’t be more proud of the effort that we played with,” Diaz said. “To come back down from 28-0, if you ever want proof of the character of our young men, the effort that they play with, what they believe in each other and what they believe in this program, there is no better example than that. Our issue is that the errors that we made, giving them a 48-yard drive, a 23-yard drive and a 20-yard drive to go up 21-0 in the first quarter, are not complicated. We hurt ourselves with some penalties, too. I thought the difference in the game was the red-zone, them versus us.

“All that being said, again, to be able to battle back to have a chance to win the football game shows that we have something special in the locker room and we have something that is worth protecting,” Diaz said. “The execution part, we had a feeling that it was something that would lag behind the effort as we got into the season. It’s time for us to look at ourselves as a staff, and we have to do a better job of getting that execution going quicker. Obviously, we have an outstanding opponent here on Friday night so we don’t have a lot of time to lick our wounds. We have to get ready to play Virginia on Friday.”

The resilient effort in the second half followed a difficult opening 30 minutes of play for the Hurricanes. Miami charged near midfield on its opening possession before a tipped pass from Williams intended for Mike Harley landed in the hands of Virginia Tech’s Jermaine Waller at the UM 48. The interception was the first thrown by Williams, snapping a streak of 121 passes thrown without a pick.

The Hokies converted the turnover into points, as Hooker ran into the end zone from 12 yards out to cap an eight-play scoring drive with a touchdown that gave Virginia Tech a 7-0 lead less the six minutes into the game.

The Hurricanes appeared poised to answer back on their next possession, with Williams completing a pass to Jordan for a 21-yard gain and Miami pushing into VT territory with an effective rushing attack. Williams then took a shot at the end zone, but his pass was picked off by Caleb Farley and the turnover and touchback quelled Miami’s momentum.

UM’s defense forced a punt and Miami’s offense looked to regroup, but Waller picked off Williams for the second time and returned the interception 23 yards to the Miami 23. Two plays later, Hooker connected with Keene for a 20-yard touchdown that doubled the VT lead to 14 points with 3:19 remaining in the opening half.

Perry took over at quarterback for Miami in its fourth possession, but the result was similar. Virginia Tech forced a fumble on a rush by Harley and VT’s Jaylen Griffin recovered the loose ball to give the Hokies their fourth turnover of the opening quarter. Four plays later, Mitchell rushed for a one-yard touchdown that gave Virginia Tech a 21-0 advantage in the first quarter.

“We felt like the way that Jarren started the game that N’Kosi had a chance to come in and see if he could do something to light a spark,” Diaz said. “Jarren was seeing late or just getting the ball out late and, you know, had three interceptions in quick succession, so we thought N’Kosi went in and, in that stage, gave us the best chance to win. We didn’t want to do anything to wreck Jarren’s confidence. We still believe that Jarren is our guy so I don’t know what would change. It was just, as the game was going on, that N’Kosi gave us the best chance to win.”

The Hokies continued pouring it on in the second quarter, completing their longest drive of the opening half with a 17-yard touchdown reception by Keene. The 12-play, 80-yard scoring drive lasted 6:02, including the first five and a half minutes of the second quarter, and put Virginia Tech ahead, 28-0.

Despite the daunting deficit, Miami did not quit. Perry connected with Jordan for a 51-yard gain that put the Canes at the VT 4. But the Hokies’ defense put Miami in a fourth-and-goal situation and intercepted Perry in the end zone to force the fifth turnover of the first half.