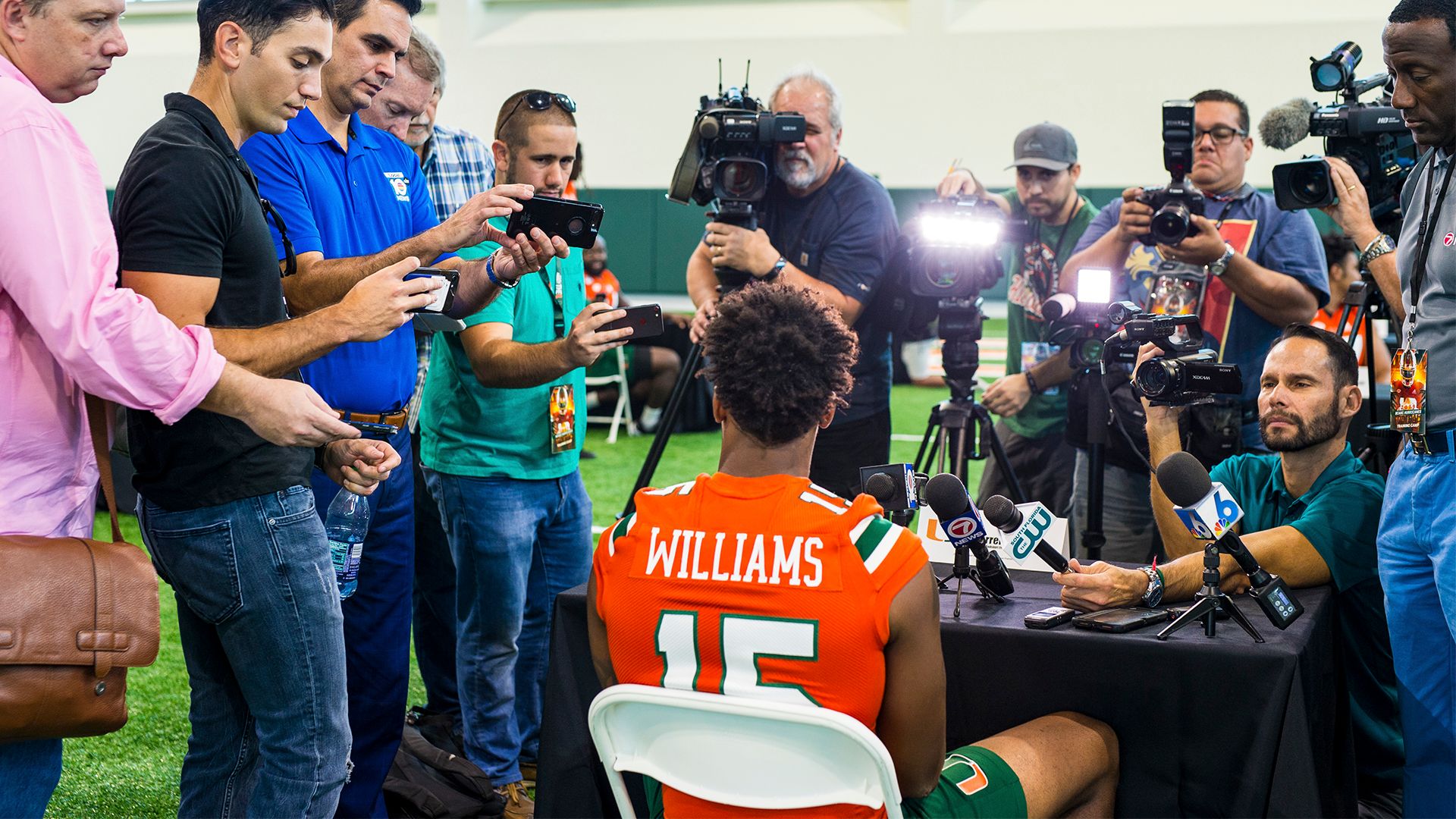 Stepping Into the Spotlight

As he walked out of the Carol Soffer Indoor Practice Facility on Tuesday, his first full day as the starting quarterback at the University of Miami, Jarren Williams took a deep breath and smiled.

For the better part of an hour during media day, Williams had answered question after question about his new role, his fellow quarterbacks, his teammates, his coaches, and the competition he’d just endured.

Others might have seen that as a challenge. But Williams? He couldn’t stop smiling.

“Honestly, I see it as a blessing, really,” the redshirt freshman said. “To be out there and represent the team, it’s a great feeling. Definitely a humbling experience.”

The last 24 hours have been a whirlwind of sorts for Williams, who on Monday, was named the Hurricanes’ starter after competing with signal callers N’Kosi Perry and Tate Martell for the job.

All three met with Hurricanes head coach Manny Diaz and offensive coordinator Dan Enos on Monday and throughout that process, Williams tried to keep his emotions in check.

After a strong performance Saturday night during the Hurricanes’ second scrimmage of camp, he had an idea he might have done enough to earn the job. He became more optimistic as he realized he was the third of the three quarterbacks to meet with the coaches.

But until he saw Enos smile, Williams tried to keep his emotions – and expectations – in check.

“I was like ‘Okay, I’ve got to keep it cool. Just keep it cool because I couldn’t believe it,” Williams said. “But when Coach Enos smiled at me, I couldn’t help but smile back. I know they’re happy for me and they want the best for all of us. We got up, we hugged it out and it was a really good moment.”

Williams and the Hurricanes are hoping that was the first of many good moments to come for the redshirt freshman who will get his first opportunity to lead Miami’s offense when the Hurricanes open the season Aug. 24 against Florida at Camping World Stadium in Orlando.

A season ago, Williams could do little more than watch from the sideline as Miami navigated its way through a tough season.

It was frustrating, he admits, having to wait and wonder if playing time would come. But now, a year later, Williams says everything he endured has prepared him for what’s next.

“I feel like I learned a lot about myself going through last year as a man, as a teammate and even as a quarterback,” Williams said. “Just being a quarterback at the University of Miami was a great learning experience for me. I learned you can’t rush things. Sometimes, you have to wait and it’s all in God’s timing. … Being kind of young, kind of immature, I didn’t really see it like that. But as I kind of went through the year, I kind of grew up and started looking at things differently. I just had to go to work. I realized what you put in is what you’re going to get out.”

And during the offseason, Williams showed he was ready to do the work.

With help from strength and conditioning director David Feeley and his staff, Williams reshaped his body, losing between 15 and 20 pounds and cutting his body-fat percentage dramatically.

During camp, he earned public praise from Enos, who noted Williams had topped the 20 miles-per-hour-mark on the Catapult GPS system that has been monitoring the Hurricanes’ effort and progress during practices.

He worked with his receivers to make sure timing was right, dove into learning the playbook and several of his teammates noted Williams has simply carried himself differently than he has in the past.

“Forget the touchdowns or the nice throws, he’s doing the little things,” junior receiver Mike Harley said. “Leadership. Being consistent on a day-to-day basis, being that leader that we all needed. If the offense was down and we’ve needed a spark, he’s been that leader. He’s stepped up. … Off the field and on the field, he’s done the little things.”

Added junior running back DeeJay Dallas, “He matured a lot from last year to now. His throwing mechanics improved. And he’s just improved as a leader off the field. He’s like a point guard at quarterback. He gets the playmakers the ball and that’s what we need.”

Along with getting support from his teammates and coaches, Williams has already found himself getting encouragement and advice from the fraternity of Hurricanes quarterbacks who have played before him and helped set the standard at Miami.

Brad Kaaya, Miami’s all-time career passing leader and the last quarterback to wear No. 15 in Coral Gables, sent Williams a message of public support on social media this week and texted him privately, too. Former Hurricanes quarterbacks Malik Rosier and Stephen Morris have also offered advice and given him their support.

Williams has welcomed it all and has tried to take all the advice to heart as he prepares for the biggest moment of his college football career.

Stepping into the spotlight Tuesday was the first step. Now, another challenge awaits.

“It’s a big moment, but the way I look at it, I’m the starting quarterback now. It’s a great feeling. I’m blessed. But we’ve got a game coming up,” Williams said. “I’ve got to do my job and make sure I’m focused. I can’t worry about what anyone’s saying, the hype or the attention. My focus is really on Florida and going out there every day, competing with our defense and getting each other better. That’s my focus now.”