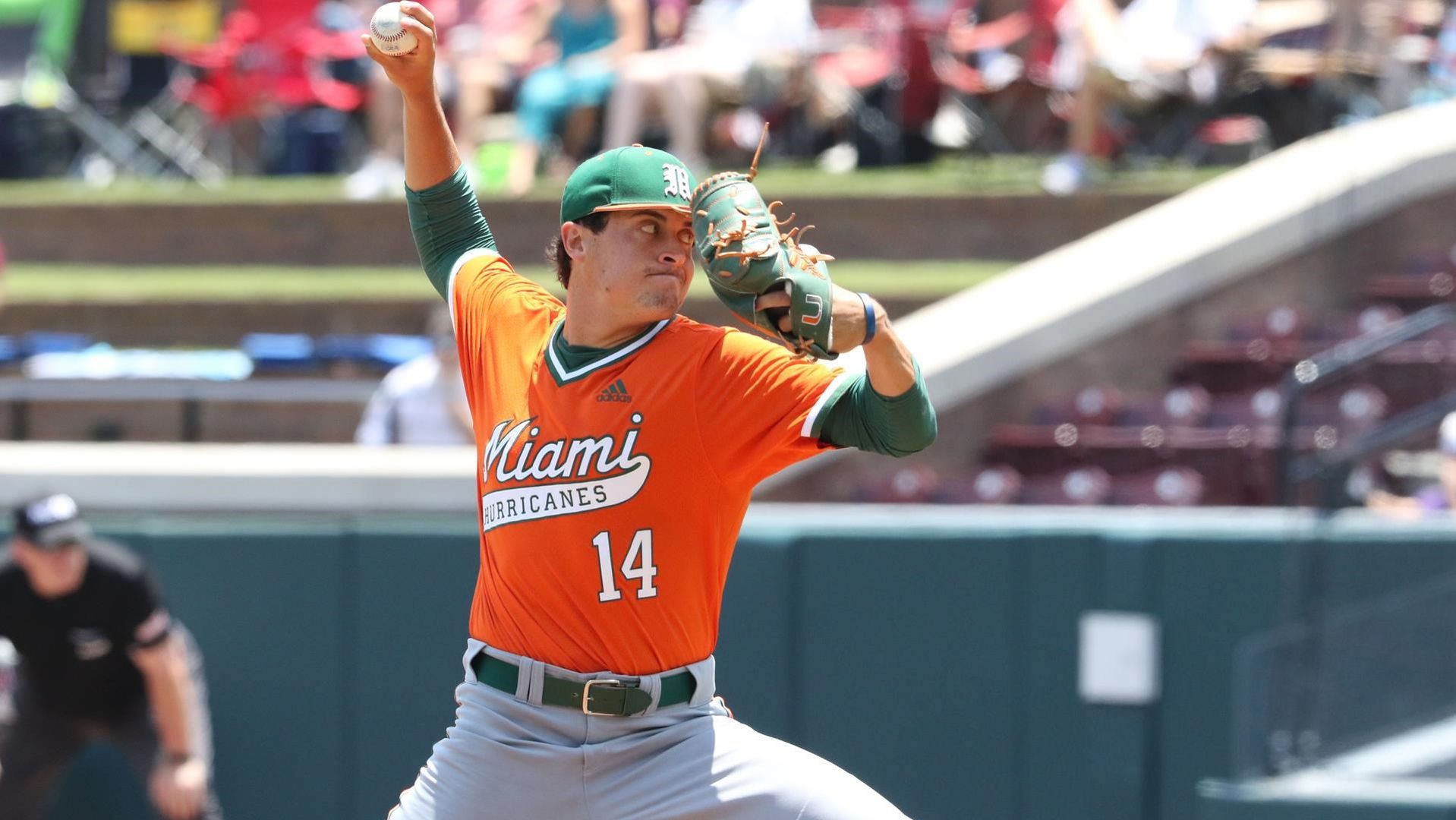 The Canes (40-19) scored double-digit runs for the 75th time in an NCAA postseason game, snapping a tie with the University of Texas to take sole possession atop that statistical category in NCAA history. The Hurricanes’ hot bats and strong arms proved to be too much for Southern (32-24), eliminating the SWAC champions from the 2019 NCAA tournament.

“A good bounce-back for us,” head coach Gino DiMare said. “It seemed like we were just here last night and turned around for our guys to come back because it was a tough game for us to lose last night. We put ourselves in this position, but our guys came back and go déjà vu all over again. We scored runs early. I felt we put them away in the fifth inning there and probably took the life out of them a little bit there with that big inning, which is what we need to do when we have big leads. We have to be able to put the pedal down, and our guys did that today.”

Miami’s bats got right to work against Southern right-hander Eli Finney, making two loud outs before Freddy Zamora laced a single through the left side that sparked a big rally. Following an Adrian Del Castillo walk, Raymond Gil smacked an RBI single to center that drove in Zamora.

JP Gates followed with an RBI single and Alex Toral ripped a two-run double to the gap in left-center that gave the Hurricanes a 4-0 advantage before starter Evan McKendry even took the mound.

“I feel like, right ahead, we just jumped on them right out of the gate,” Toral said. ” I feel like, personally, hitting is contagious. Once you see Freddy gets the first hit, Adrian gets on, Gil with an RBI, and Gate with an RBI. It just relaxes you, and it gets you to the point where now it is my turn to get an RBI.”

The junior right-hander was dominant in his NCAA postseason debut, throwing just 37 pitches while striking out three over four scoreless innings. McKendry retired the first eight Jaguars he faced before a bloop double to center by Javeyan Williams gave Southern its first and only base runner while McKendry was on the mound.

“It felt really good,” McKendry said. “I usually do not get too sore after throwing. I think I could be ready to go whenever coach calls my name, whether it is tomorrow or whether it is Monday. I will go out there whenever he needs me. I am ready to go.”

Miami added on in a big way with an eight-run fifth inning, loading the bases three times, sending 13 batters to the plate and forcing Southern to use four different pitchers to record three outs in the frame.

The Canes loaded the bases for the first time thanks to a rocket double by Del Castillo that was sandwiched by walks to Zamora and Gil. Toral stepped to the plate with one out in the inning and smacked the first pitch he saw for a two-run single to right-center that gave Miami a 6-0 lead and ended the afternoon for Finney.

Reliever Rhett Hebert did not fare much better, walking Michael Amditis to reload the bases and set the table for Gabe Rivera’s three-run double down the third base line that pushed the Miami lead to nine.

Lefty Jackson Cullen faced four batters, giving up three walks and an RBI single to Anthony Vilar that made it 11-0 in favor of the Canes before he was replaced on the mound by right-hander Justin Freeman. Gil drove a ball deep to right for a sacrifice fly that sent Vilar home and put Miami ahead by a dozen.

With a 12-0 lead, DiMare elected to lift McKendry after just 37 pitches to save him for a potential appearance later in the Starkville Regional.

“It could not have worked out any better for us,” DiMare said. “We get him out of there early with only 30 or so pitches, which, hopefully, we can come back to Evan at some point before this thing is over with.”

Miami will advance to play at 3 p.m. ET on Sunday, where they will face the loser of Saturday night’s game between host Mississippi State and three-seed Central Michigan.