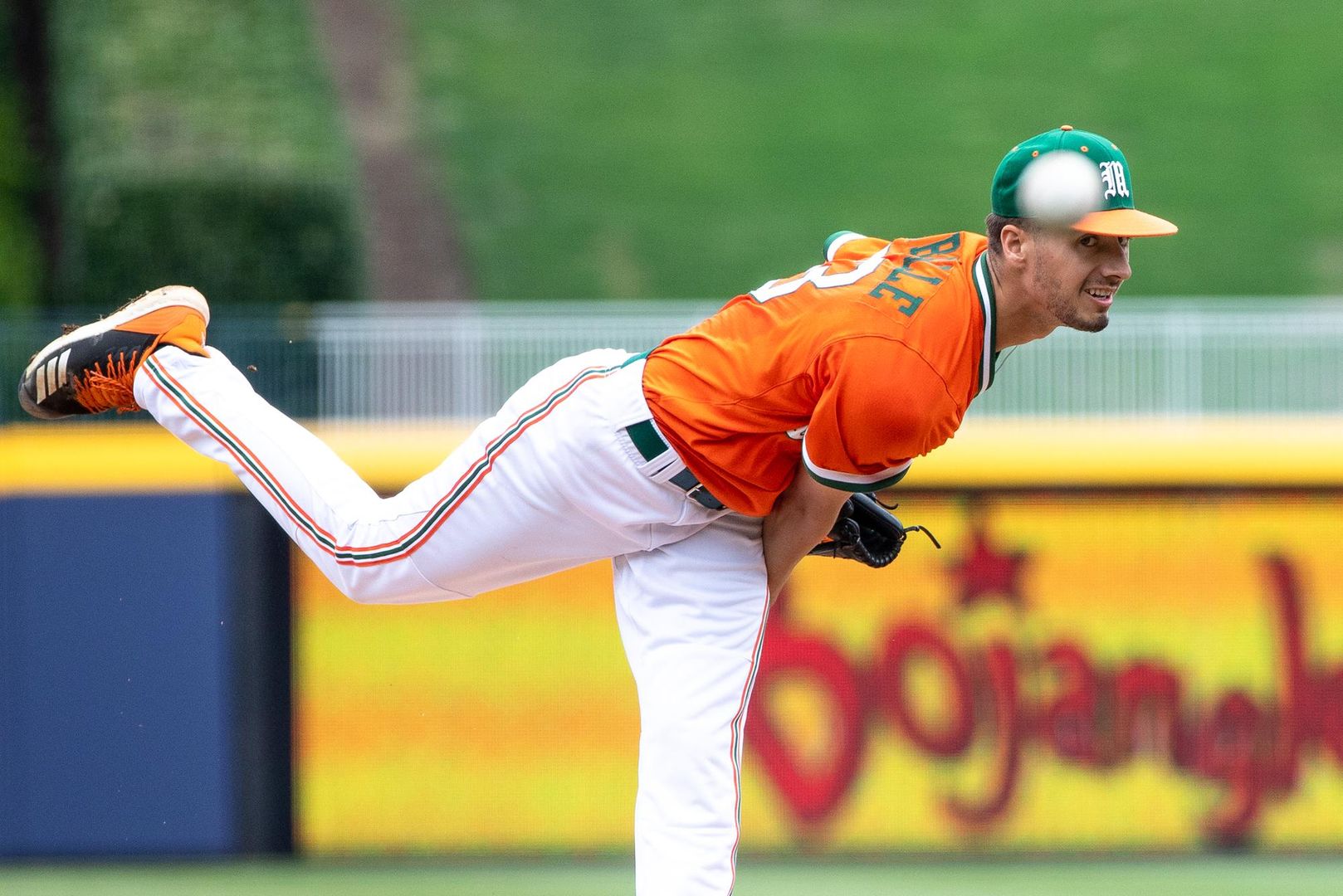 DURHAM, N.C. – The Miami Hurricanes had to wait until Day 3 of the ACC Baseball Championship and they announced their arrival with a 10-3 win over No. 9 seed Virginia.

The fourth-seeded Canes (39-17) put up double-digit runs and got strong pitching from a trio of right-handers to improve to 4-0 on the year against the Cavaliers (32-24). With the seven-run victory inside Durham Bulls Athletic Park, Miami won its ACC Championship opener for the fifth consecutive season. The Hurricanes will face No. 5 seed North Carolina (39-17) on Friday at 3 p.m. to conclude pool play. Miami will start right-hander Evan McKendry against UNC right-hander Austin Bergner.

“This game mattered to us. I told them it mattered. Absolutely mattered,” head coach Gino DiMare said. “First of all, that’s our motto for the year; you just stole our line, ‘it matters.’ We got tee shirts that we wear every day that says it on there. Because we’re still trying to host. We’re still trying to host. You can’t give this game away, you’ve got to treat it like any other game, which we did.”

Freshman star Adrian Del Castillo wasted no time making his presence known in his first ACC Baseball Championship, crushing a two-run bomb off of Virginia starter Noah Murdock. The 386-foot homer gave Miami a two-run advantage after just half an inning of baseball.

“Just trying to put the ball in play,” Del Castillo said. “Freddy [Zamora] had a good at-bat, I don’t know how much pitches, but it was a good walk, and I was trying to move him over so Raymond [Gil] behind me could move him in or something like that. I just got a good pitch to hit, and I hit it pretty well.”

But Virginia answered back against Miami starter Brian Van Belle, picking up a run on an RBI single by Nic Kent and another on a two-out RBI double to right off the bat of Jack Weiller that evened the score at 2.

The Cavaliers threatened in the bottom of the third, getting runners at the corners with one out against Van Belle. But Miami executed perfectly against a UVA double steal, with Michael Amditis firing to shortstop Freddy Zamora who threw a strike back to Amditis at home to retire Kent. Van Belle got Weiller to fly out to center to end the inning and keep the game knotted at 2.

Zamora put the Canes back on top with a beautiful bunt single in the fifth. After singles by Jordan Lala and Anthony Vilar gave the Hurricanes runners at the corners with one out, the Miami shortstop put down a perfect bunt that rode the third base line and drove in Lala to put Miami up, 3-2.

“Our hitting coach, [Norberto Lopez] emphasizes being on time with the pitchers, and today I felt like I was in a good rhythm with the pitchers,” Zamora said. “My timing was on, and taking those first two walks in the first two at-bats was crucial for me. I was seeing the ball well, and the third at-bat I had that bunt, and I had a lot of confidence at the plate today, and I think it showed.”

The Canes added two more runs in the inning, as an error by Nate Eikhoff at first on a hard grounder from JP Gates resulted in Vilar and Zamora crossing home plate to give Miami a three-run lead. That play also ended Murdock’s day after allowing five runs (three earned) on five hits over 4.2 innings pitched.

Virginia continued fighting in the sixth, as Brendan Rivoli reached on a throwing error by Zamora and scored when Weiller doubled off the wall in left to cut Miami’s lead to two, 5-3. Cameron Simmons followed with a single that gave UVA runners at the corners with one out and ended Van Belle’s afternoon after five and a third innings.

Reliever Daniel Federman followed Miami’s All-ACC starter and struck out Eikhoff, but the Virginia batter reached base on a passed ball to load the bases. Federman settled in, inducing an inning-ending 4-6-3 double play to strand the bases loaded and keep Miami ahead, 5-3.

Miami got the run back in the eighth, loading the bases against right-hander Griff McGarry before Lala walked on four pitches to send home pinch runner Willy Escala and give the Hurricanes their second three-run lead of the game. The rally flourished against reliever Kyle Whitten, as Vilar and Zamora hit consecutive two-run singles that made it 10-3 in favor of the Hurricanes.

Freshman right-hander Slade Cecconi tossed the final two innings for Miami, racking up four strikeouts to close out the victory for the top-seeded team in Pool D.

“I’m happy to get the win,” DiMare said. “I think it was a sloppy game on probably both ends if their coach had to say it and be honest, I guess. It was sloppy on their end, very sloppy on ours. Made too many mistakes defensively, which has been our nemesis this year, but also what’s good for us is we swing the bat and a chance to put up big numbers, and the eighth inning we opened up it up with a five-run eighth. Happy to get the win in our first game and move forward, get ready for North Carolina.”