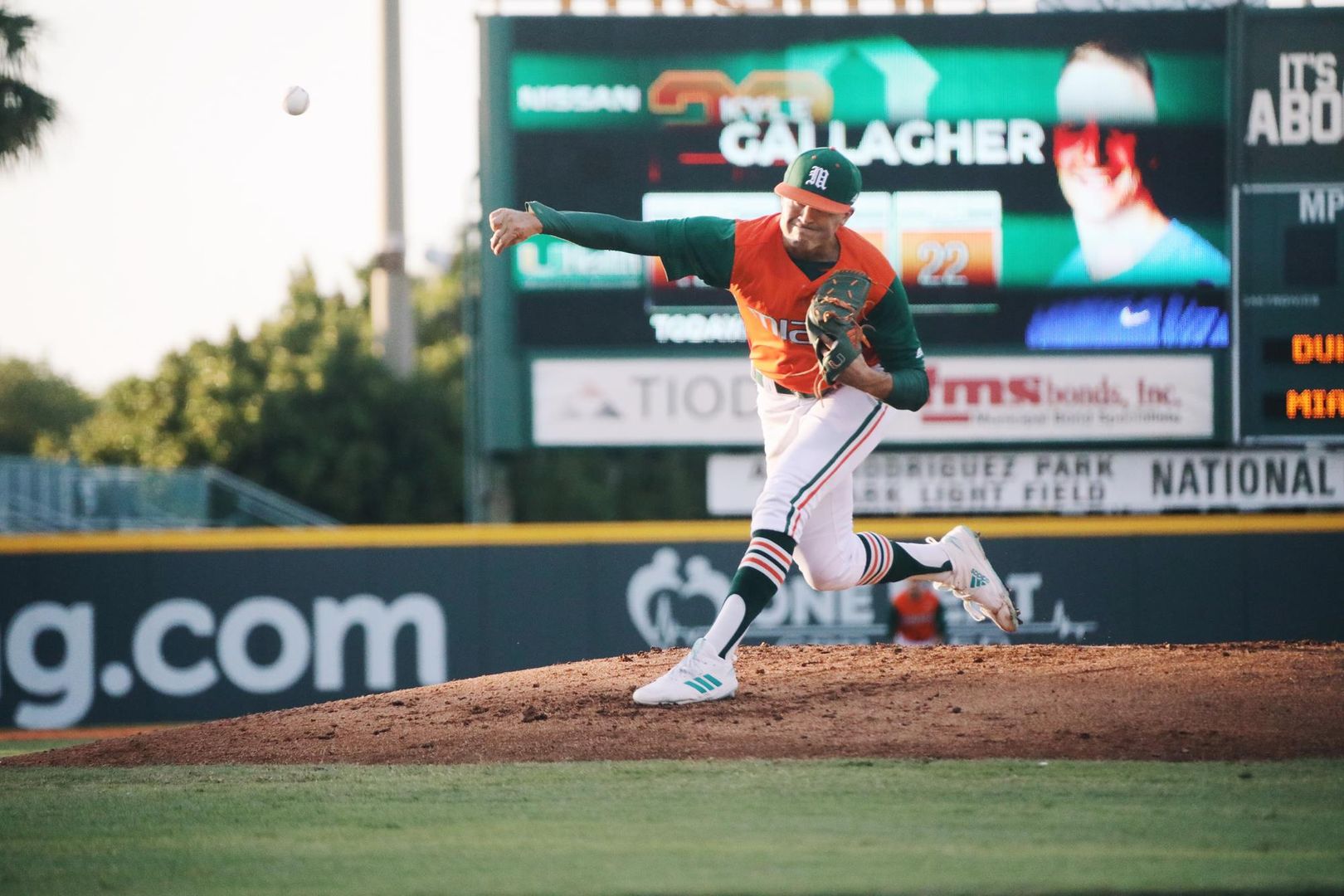 CORAL GABLES, Fla. – Miami ace Evan McKendry was solid in his return to the mound, but the Duke Blue Devils scored 10 runs against the Miami bullpen to even the series with a 12-3 win on Friday night.

“I felt good, I felt healthy and I felt strong,” McKendry said. “I was happy to be back out there.

The junior right-hander struck out a pair of Blue Devils and walked three before turning the ball over to the bullpen and that is when Duke (30-23, 15-14 ACC) made its move.

The Blue Devils got on the board shortly afterward, as reliever Mark Mixon fielded a tapper by Kyle Gallagher and threw it away allowing Ethan Murray to score. Chris Crabtree followed with an RBI double off the wall in center and Erikson Nichols drove in a run with a base hit to left before sophomore lefty Jeremy Cook replaced Mixon on the mound with a 3-0 Duke lead.

Cook threw a wild pitch on a 1-2 count to RJ Schreck that allowed Crabtree to score and Nichols to move up to second. Duke added a fifth run in the inning, as Anthony Vilar could not handle a chopper to second by Joey Loperfido that extended the inning and allowed Nichols to score from second.

“All in all, a very ugly game,” head coach Gino DiMare said. “We just could never get anything going and far and away the worst managed game in my short career so far. Just not a very good game and I’ll take full responsibility for it. Just a poorly managed game and a poorly played game.”

The Hurricanes’ offense answered back in the bottom of the fourth against Duke starter Bill Chillari. Raymond Gil hit his 12thhome run of the season, crushing a solo shot deep to center that got Miami on the scoreboard.

“We’ve just bounce back,” Gil said. “We had a rough night tonight but tomorrow is a new day and that’s the beauty of baseball. We have a day tomorrow to make it up and win the series.”

Chillari walked JP Gates and Michael Amditis before Duke head coach Chris Pollard lifted his starter in favor of right-hander Jack Carey and the freshman ended the threat in the inning. But an inning later, Miami got another run across when Adrian Del Castillo drove in Jordan Lala with a sacrifice fly to right that cut the Duke lead to three, 5-2.

But Duke got an RBI double to left from Schreck that pushed home Crabtree and gave the Blue Devils a 6-2 lead in the top of the sixth.

“That was an ugly game on all counts,” DiMare said. “We just, you know, the game got away from us there. Tried to fight back a little bit but every time we scratch a run they put up big numbers. They had two fives and every time we’d score and they’d score.”

Two innings later, reliever Bailey Mantilla walked the first two batters he faced before giving up a bunt single to Loperfido and Nichols scored on an errant throw by Amditis to first that made it 8-2. Back-to-back RBI singles by Ethan Murray and Michael Rothenberg gave Duke a 10-2 advantage.

Albert Maury Jr. followed Mantilla on the mound and Crabtree hit a two-out, two-run double down the line in left that put Duke ahead by 10 and wrapped up a five-run inning.

Alex Toral had an RBI single to left in the bottom of the eighth, extending his hitting streak to a season-best eight games and driving in his 58thRBI of the season.

“As a team, we’ve done this all year, we don’t really give up,” McKendry said. “I mean even the last inning you saw we’re still putting together some hits and hitting the ball well and I think that we just have to take that. We know it was a rough game, but we’re going to come back tomorrow.”