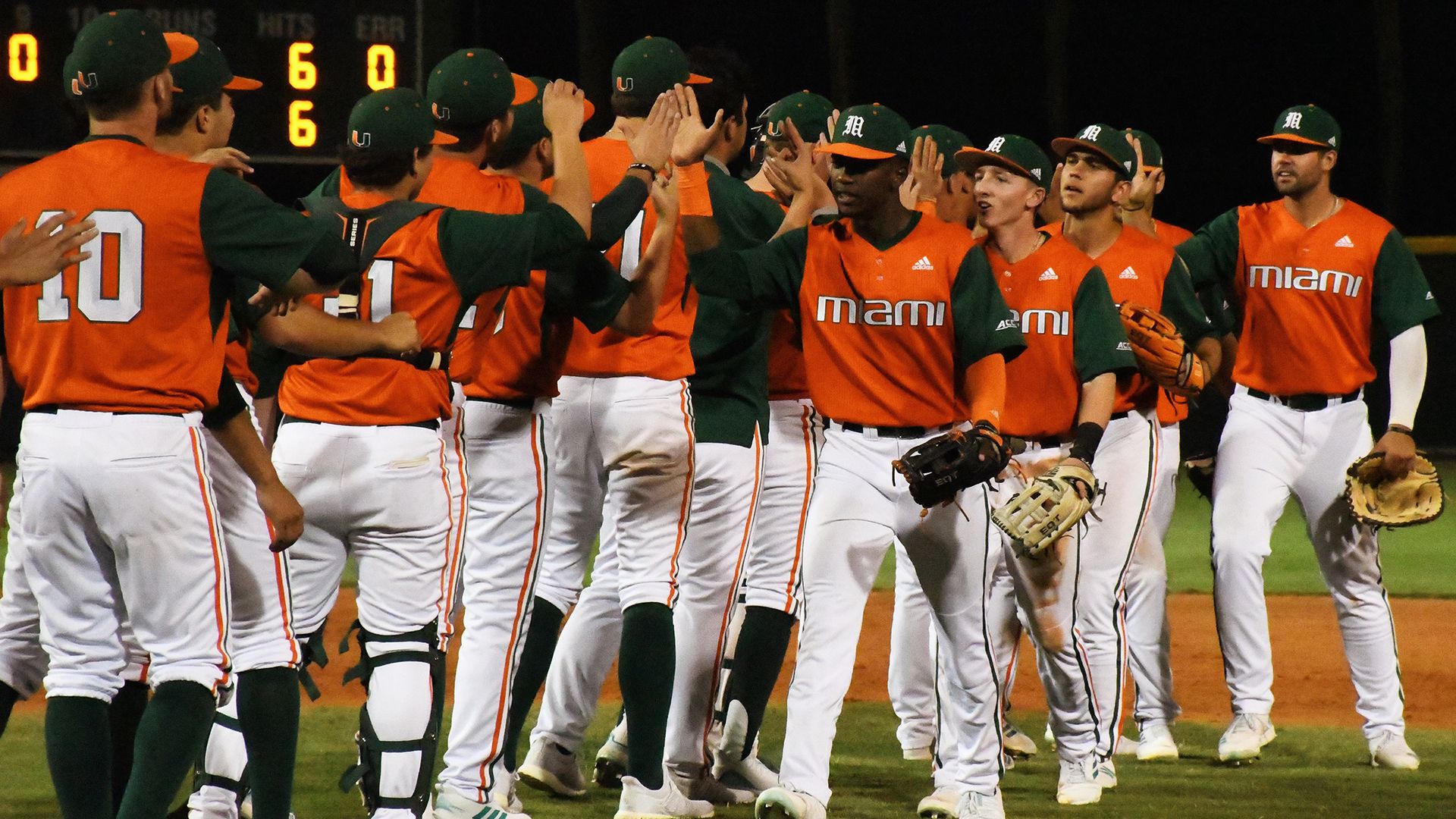 The sophomore’s bases-loaded two-run single in the bottom of the eighth turned Friday’s game upside down, pushing the Canes (29-14, 12-10 ACC) past the Hokies (24-19, 7-15 ACC) before 2,272 fans inside Alex Rodriguez Park at Mark Light Field. With the win, Miami has won eight of its last 10 games and surpassed last season’s win total of 28.

“We work endlessly,” Rivera said. “We’re out here early, we’re out here late. The coaches are pushing us and you’ve got all the right ingredients to be a successful team. Behind that, we’ve got talent and depth pitching and hitting. This wasn’t a surprise to me. A lot of people counted us out, but we believe in each other.”

Miami entered the eighth inning down 3-2 with just three hits against Virginia Tech starter Ian Seymour. The sophomore lefty was brilliant for most of his outing against the Hurricanes, but ran into trouble in his final inning of work.

“That probably one of the better lefties that we’ve seen all year,” Miami head coach Gino DiMare said. “I think he’s beat some really good teams. He’s a good Friday night guy and our matchup is tough because we’ve got a lot of lefties in our lineup. That’s a great win because that’s a great pitcher.”

Anthony Vilar sparked the rally with a one-out single to center, while Adrian Del Castillo and Raymond Gil followed with walks to load the bases for Rivera.

“He was in a good frame of mind,” DiMare said of Rivera. “I told him before the game to be ready because his number was probably going to be called upon. We go to our bench for offense and defense. I was happy for him. He’s playing with a lot of confidence and I’m very happy to see him come through for us there.”

The sophomore, who entered the game as a pinch hitter in the bottom of the sixth, smacked the 128thand final pitch of Seymour’s night up the middle for a two-run single that put Miami ahead for good, 4-3.

“He was up in pitch count and they stayed with him,” DiMare said. “We found a way to get some guys on and then Gabe had the big hit. That’s a huge win for us. It doesn’t seem like we’ve had many games where we were down a run late and were able to come back. To be able to do that tonight was very big.”

Gregory Veliz shut the door in the ninth, striking out two to earn his sixth save of the year. The junior picked up where Daniel Federman left off, as the sophomore right-hander faced just six batters over two scoreless innings and earned his second win of the season. Federman and Veliz did not a single batter reach base over the final three innings of action on Friday night.

Miami was resilient against the Hokies, never panicking despite Virginia Tech scoring early and regaining the lead in the middle innings.

Tech strung together three straight hits to open the top of the second against Miami starter Slade Cecconi. Kevin Madden smacked a single up the middle to kick off the rally and scored two batters later on an RBI single by Dalton Harum to put Virginia Tech on the scoreboard. The Hokies added a second run in the inning thanks to a sacrifice fly by Jack Owens, giving them an early 2-0 advantage.

Miami charged back in the bottom of the third, as Tony Jenkins laced a leadoff single to left and Willy Escala smashed an RBI double to right that pushed Jenkins home and cut the VT lead in half. Three batters later, the Hurricanes evened the game at 2-2 when Adrian Del Castillo drove home Escala with a sacrifice fly to left.

Cecconi allowed just two runs over four hits over five innings. The freshmen set a new career-high with nine strikeouts on the night before turning the game over to fellow freshman Bailey Mantilla. The Hokies opened the sixth with a double to right by Tanner Thomas, who advanced to third on a fly out to right.

“He had nine strikeouts, which is going to runs your pitch count up,” DiMare said. “We’ve got to do a better job of having him be more efficient and pitching deeper into games. Having said that, he’s throwing on a Friday night as a freshman that we have as our No. 4 and he’s throwing on a Friday night. That’s how we feel about Slade where we have so much confidence in him that I’m talking about him like if he was our ace and he is pitching against arguably one of the best pitchers we have faced all year.”

With two outs in the inning, Virginia Tech head coach John Szefc and Miami head coach Gino DiMare played a bit of cat and mouse. The Hokies elected to send pinch hitter August Haymaker to face the lefty Mantilla. Miami countered with righty specialist Mark Mixon and Sfezc responded with the left-handed hitting Michael Fernandez and the move proved worthy, as the freshman from Miami singled home Thomas to put Virginia Tech back on top, 3-2.