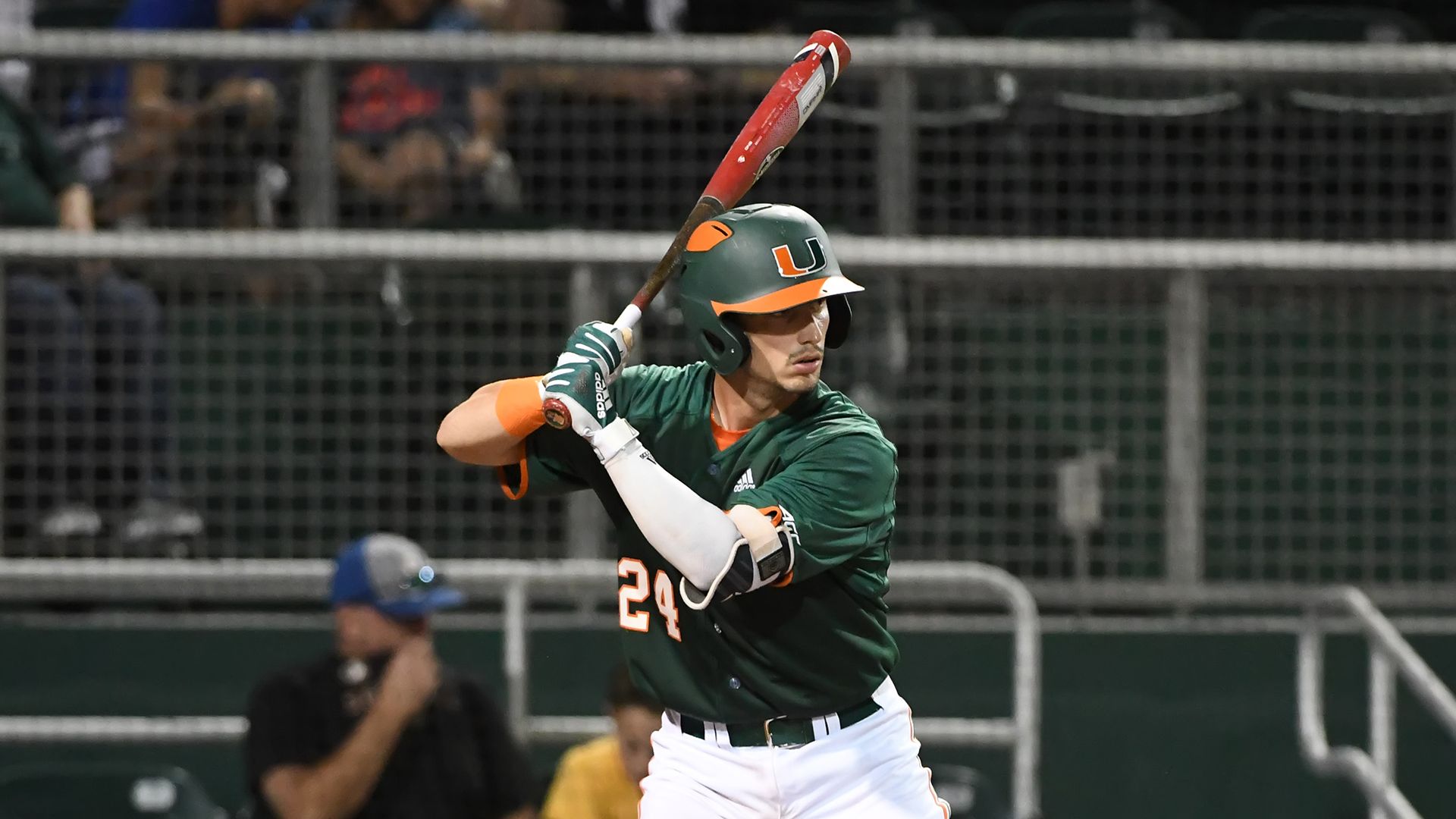 Michael Amditis was not originally in the starting lineup when Miami head coach Gino DiMare posted it in the No. 24 Hurricanes’ clubhouse on Wednesday afternoon.

But two of the Canes’ top hitters, Raymond Gil and Freddy Zamora, were scratched due to injury and the redshirt sophomore was thrust in the starting nine after batting practice. Amditis stepped up with a three-hit performance to help the Canes beat crosstown foe FIU, 18-10.

“It feels amazing to be able to contribute to this ball club and catch some great pitchers and have a great fielding team,” Amditis said. “It’s just great to be back on the field.”

With the victory, Miami (28-14) improved to 10-2 in midweek games and matched its win total for the 2018 season. A year ago the Hurricanes struggled in midweek contests, turning in a 3-8 record in non-weekend series regular season games. The victory also secured a season sweep over the crosstown Panthers (17-23).

While Miami poured it on offensively Wednesday, FIU’s bats got going first as cleanup hitter Jose Garcia hit a two-run homer off Miami starter Tyler Keysor that put the Panthers on top in the top of the first 2-0.

But Miami evened the score with a two-run bomb from right fielder Gabe Rivera in the bottom of the second. The blast off FIU starter Angel Tiburcio landed on the track inside Cobb Stadium beyond the left field fence and tied the game at 2.

The Canes took the lead two innings later, loading the bases against reliever Everett Hurst before lefty Will Saxton walked Tony Jenkins to push home Amditis and put Miami ahead. Right-hander Jose Machado replaced Saxton after just five pitches, but he hit Willy Escala with his third pitch of the night and the Hurricanes’ lead doubled to 4-2.

Miami added another run with a bases loaded walk by Jordan Lala before Anthony Vilar ripped a three-run triple down the line in right to put the Canes up six runs and tie his career-high in runs batted in. Adrian Del Castillo’s sacrifice fly to drove in Vilar to round out a seven-run inning in which the Hurricanes sent 10 batters to the plate.

“It was a low and inside pitch on a 3-1 count,” Vilar said. “I was just trying to get a pitch I can drive and I barreled it up and scored the three runs. That’s what’s most important.”

FIU got three runs back in the top of the fifth, sending nine batters to the plate against Miami reliever Mark Mixon. The Panthers loaded the bases before Austin Shenton drove in two runs on a single to right. A four-pitch walk of Garcia loaded the bases again and Mixon hit Javier Valdes on a full count pitch to send home Derek Cartaya and cut Miami’s lead to four, 9-5.

Amditis crushed his sixth homer of the year, a solo shot off the scoreboard in left, to push Miami’s lead back to five. The homer was the redshirt sophomore’s third hit of the night, tying a career-high.

“We’ve come a long way, but we’re certainly not done yet,” Amditis said. “We have a lot more to show and I think everyone is excited to show what we have.”

An inning later, JP Gates became the second Hurricanes freshman to record a three-run triple against FIU on Wednesday night. The UM designated hitter ripped a bases-loaded double to the gap in right-center that gave Miami a 13-5 lead.

The Canes scored another run in the bottom of the seventh, as pinch hitter Chet Moore’s sharply hit groundout to short drove in Chad Crosbie to make it 14-5 in favor of Miami.

FIU added three runs in the eighth against lefty Bailey Mantilla, but the Canes answered with four runs thanks to RBI singles from Alex Toral, Crosbie and Escala and a sacrifice fly by Moore that made it 18-9.

The Panthers scratched a run across against Gates in the ninth, but could not get enough momentum going to avoid a season sweep by the Hurricanes.

“We didn’t play great tonight, but we outslugged them,” DiMare said. “Our offense seems to be the one constant all year long, which is the one thing we were concerned about. Our pitching has got to be better.”

The Hurricanes will continue their eight-game homestand this weekend with a three-game series against Virginia Tech. Friday and Saturday’s games are scheduled for 7 p.m., while Sunday’s finale is set to begin at 1 p.m.