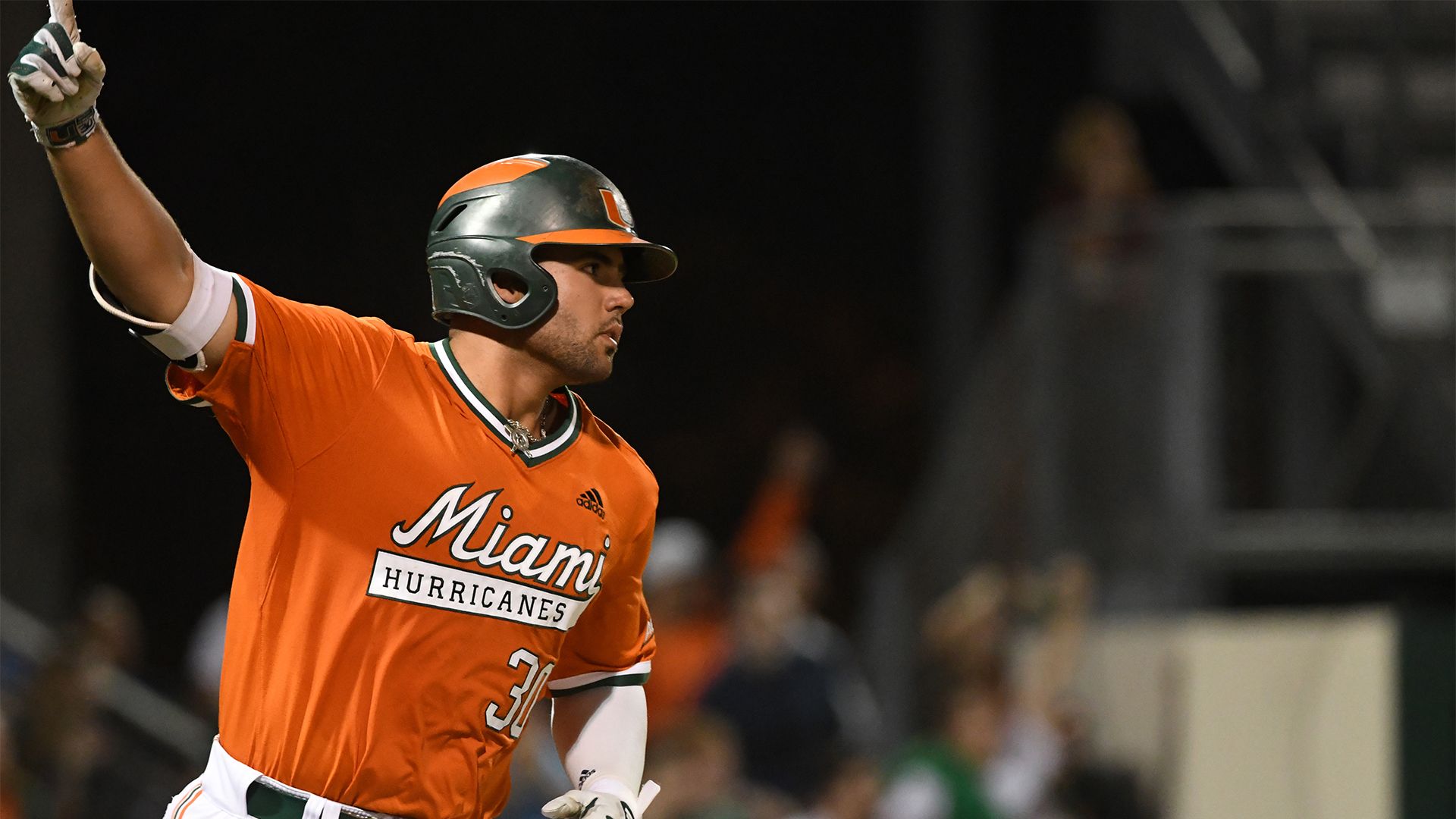 LOUISVILLE, Ky. – It took much longer than anticipated, but the No. 23 Miami Hurricanes outlasted No. 8 Louisville, 16-11, in a marathon game that began on Friday afternoon and ended nearly 22 hours later.

A nine-run sixth inning in a deluge during a game played over the course of two separate days propelled the Canes (27-13, 11-9 ACC) past the Cardinals (30-9, 14-6 ACC) to even the series between the two ACC foes. Louisville struggled to find success on the mound for most of the game, using 10 different pitchers and issuing a season-high 16 walks.

The weather at Jim Patterson Stadium on Friday afternoon was cold and wet, with temperatures in the forties and a steady rain that fell sideways for most of the game. But showed patience at the plate as six different Louisville pitchers struggled to find the strike zone in the inning.

The Hurricanes entered the top of the sixth inning with just two hits, trailing 3-1 against the top team in the ACC. Adrian Del Castillo singled and Raymond Gil doubled to knock Cardinals’ starter Bobby Miller out of the game with one out in the inning.

Louisville head coach Dan McDonnell called in lefty Adam Elliott to face JP Gates, but DiMare pinch hit with Tony Jenkins and the sophomore walked to load the bases and that’s when things got interesting.

Right-hander Jared Poland entered to pitch and uncorked a wild pitch that allowed Del Castillo to score and make it 3-2. The reliever settled down and struck out Michael Amditis for the second out of the sixth.

Rivera worked a walk to reload the bases and McDonnell changed pitchers again, bringing in lefty Garrett Schmeltz to face the left-handed hitting Jordan Lala. Schmeltz hit the freshman outfielder to give Miami a 4-3 lead and fell behind in the count, 2-0, to Anthony Vilar before McDonnell pulled him in favor of RHP Shay Smiddy.

The fifth Louisville pitcher of the inning, Smiddy walked Vilar and Freddy Zamora, pushing home two more runs and giving the Hurricanes a 6-3 advantage. Del Castillo followed with a walk and McDonnell called in right-hander Glenn Albanese to face Gil with the bases full of Hurricanes.

Miami’s leading hitter smacked a three-run double tothe right field corner to make it 10-3 in favor of the Canes. The double was Gil’s second of the inning, making the sophomore the first Hurricane with two hits in an inning since Zack Collins on March 6, 2016 vs. Manhattan.

The Canes scored nine runs on three hits in a 58-minute sixth inning in which Louisville used six different pitchers. Miami sent nine batters to the plate between balls batted in play, both of which were doubles by Gil.

Play was suspended in the bottom of the sixth inning due to inclement weather. Miami was leading, 10-3, when umpires suspended play at 7 p.m. on Friday. An hour later, the decision was announced to suspend play for the remainder of the night. Louisville had runners on second and third with one out and a 1-2 count to Justin Lavey, while Miami freshman Bailey Mantilla was on the mound when the umpires cleared the field and stopped play.

The two teams returned to Jim Patterson Stadium on Saturday at noon and Miami sent right-hander Mark Mixon to the mound. The junior threw one pitch past Lavey for a strikeout and got Lucas Dunn to groundout to second to strand the two baserunners.

Louisville added three runs in the bottom of the seventh, as Drew Campbell delivered a two-out, two-run single to left that cut Miami’s lead to five and Zeke Pinkham followed with an RBI single to left-center that cut the Canes’ lead to 10-6.

But the Hurricanes answered with a six-run top of the eighth. Louisville lefty Carter Lohman, who entered the game in the top of the seventh, issued back-to-back four-pitch walks to Zamora and Del Castillo to open the eighth inning and was lifted for righty Kerry Wright. It was more of the same for the Cardinals, as Wright walked Gil on four pitches to load the bases and ran a full count to Jenkins before walking him to send Zamora home and give the Hurricanes a 11-6 lead.

McDonnell called to the bullpen again, bringing in Luke Smith to be the ninth Cardinal pitcher for the game. The right-hander walked Michael Amditis to push home another run before Toral crushed a grand slam to right that gave Miami a 16-6 lead.

Louisville refused to quit, adding four runs to its tally in the bottom of the eighth against Miami reliever Albert Maury, Jr. Logan Wyatt got the rally started with his second three-run homer of the game and the Cardinals added a fourth run after Danny Oriente doubled home Alex Binelas after the freshman tripled to left.

An inning later, the Cardinals scratched another run across after a walk and two hits against Maury. Shortstop Tyler Fitzgerald drove home pinch hitter Trey Leonard with an RBI single, but Maury got Wyatt to fly out and Amditis threw out Cameron Masterman trying to steal third to end the game and clinch the win for the Canes.

Things looked bleak for Miami prior to the sixth inning.

Louisville had a big first inning against Miami starter Evan McKendry, getting three runs on three hits against the Hurricanes’ ace. Wyatt punctuated the rally when he hit a 2-2 pitch over the right field wall for a three-run homer.

McKendry was lifted after one inning due to elbow tightness and was replaced on the mound by right-hander Tyler Keysor. The junior was excellent for the Canes, tossing three scoreless innings of relief to keep Miami within striking distance.

With one out in the fifth, Toral singled through the right side to end Miller’s no-hit bid. Two batters later, Lala smacked a two-out hit to left that sent Rivera home and brought the Canes within two, 3-1.