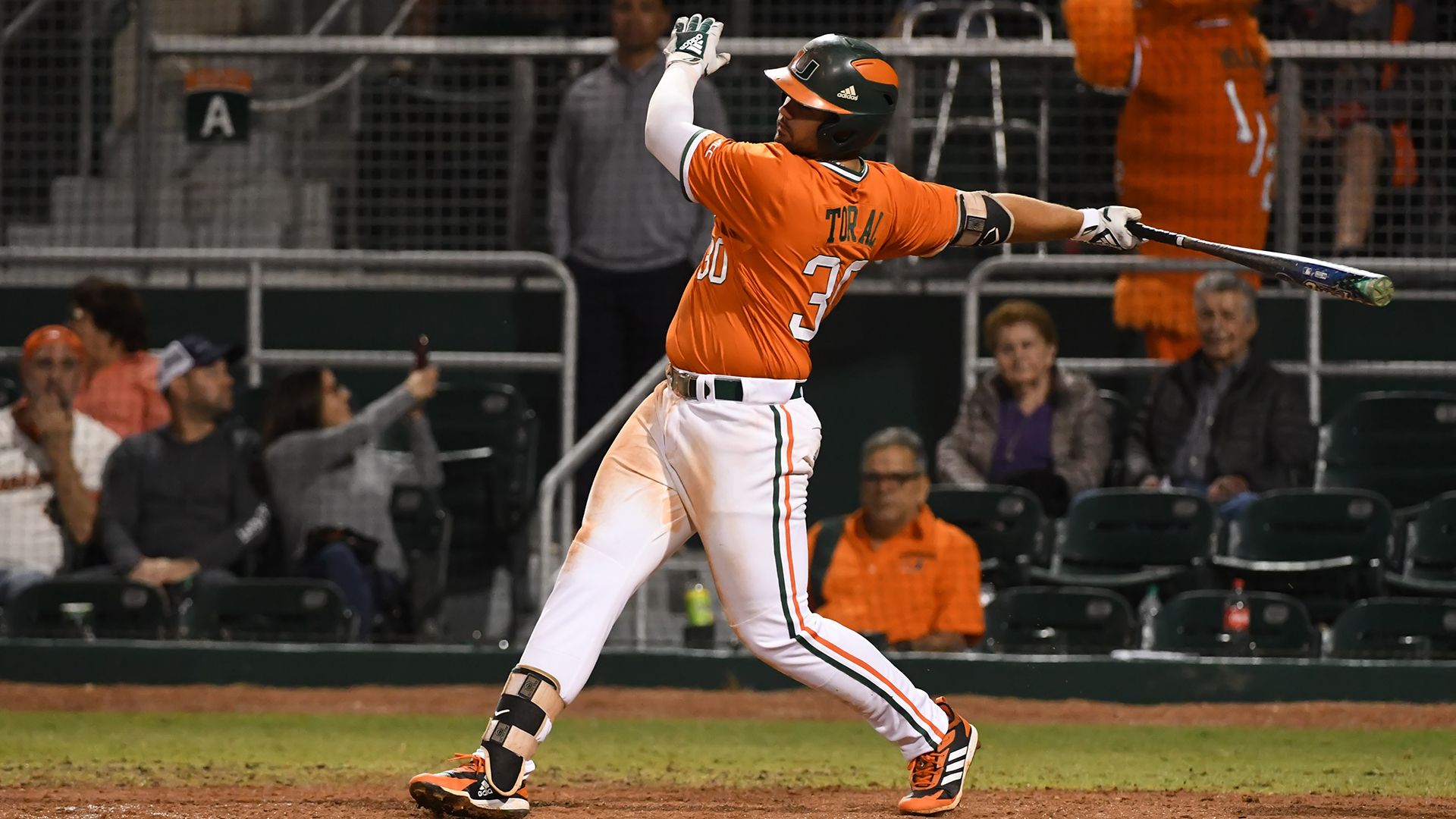 LOUISVILLE, Ky. – The Miami Hurricanes made a late charge but fell short at No. 8 Louisville, 7-5.

No. 23 Miami (26-13, 10-9 ACC) battled back and forth with the eighth-ranked Cardinals (30-8, 14-5 ACC), but gave Louisville too many opportunities and the homestanding Cards took advantage of them to take the opening game of this week’s three-game set inside Jim Patterson Field.

“We made too many mistakes, self-inflicted mistakes that you can’t do” head coach Gino DiMare said. “Walks and hit by pitches and balks and throwing balls when we shouldn’t be and letting guys take extra bases that shouldn’t be. You can’t do that against a team that is one of the hotter teams playing right now. You’ve got to play cleaner baseball.”

Louisville got on the scoreboard first, as Jake Snider hit an RBI single to right that drove home Lucas Dunn with one out in the bottom of the third. The Cardinals added on with two outs in the inning when Logan Wyatt hit a two-run homer that just got over the glove of a leaping Jordan Lala in center field to make it 3-0.

Cardinals’ starter Reid Detmers retired the first nine Hurricanes he faced on Thursday, but Miami’s bats came alive in the top of the fourth. Lala and Anthony Vilar opened the inning with consecutive singles to right before Adrian Del Castillo doubled them both home to drive in his 49th and 50th runs of the season and cut Louisville’s lead to one.

The hometown Cardinals charged right back against Cecconi in the bottom of the fourth, scoring two more runs against the freshman in what resulted as his final inning of work. Louisville strung together three one-out hits, capped by an RBI single by Justin Lavey that drove in Henry Davis. Lucas Dunn followed with a sacrifice fly to center that allowed Drew Campbell to tag up and score to give Louisville a three-run lead.

Alex Toral showed that Miami would not quit, crushing a solo homer off the batter’s eye in center field with one out in the top of the fifth. The sophomore’s team-leading 15th homer of the season brought the Hurricanes within two, 5-3.

“They put up a three-spot and we did answer and came back with two, but then we let them get back up again by three runs by putting a two-spot up, ” DiMare said. “Then we answered in the fifth and we let them answer. The bottom line is you can’t do that.”

Miami shortstop Freddy Zamora made a throwing error in the bottom of the fifth trying to throw out Tyler Fitzgerald deep in the hole at short. With the throw sailing out of play, Fitzgerald was awarded second base and scored easily when Wyatt singled off lefty Bailey Mantilla to left to make it 6-3 in favor of the home team.

Louisville added another run in the bottom of the sixth without getting a hit, as reliever Albert Maury, Jr. hit a batter and walked two more before he was replaced with two outs in the inning in favor of lefty Jeremy Cook. The sophomore walked Wyatt to give the junior his fourth RBI of the game and put the Cardinals ahead by four.

The Canes got a run in the seventh, as Michael Amditis ripped a one-out double off reliever Bryan Hoeing and advanced to third on a wild pitch before scoring on a balk by the Cardinals’ pitcher.

After Mark Mixon pitched out of a bases-loaded jam in the bottom of the eighth to keep Louisville within striking distance, Miami’s late rally began with a double to left by Del Castillo that gave him a team-best 16th multi-hit game. The freshman advanced to third on a passed ball and scored on an RBI groundout by Raymond Gil that put the Canes within two.

Amditis had a clutch two-out single to right that brought the tying run to the plate for Miami against Louisville lefty reliever Michael Kirian. But Toral, who hit a mammoth solo homer in the fifth inning, could not come through with another big hit for Miami. The sophomore grounded out to third and the Hurricanes’ late push fell just short.