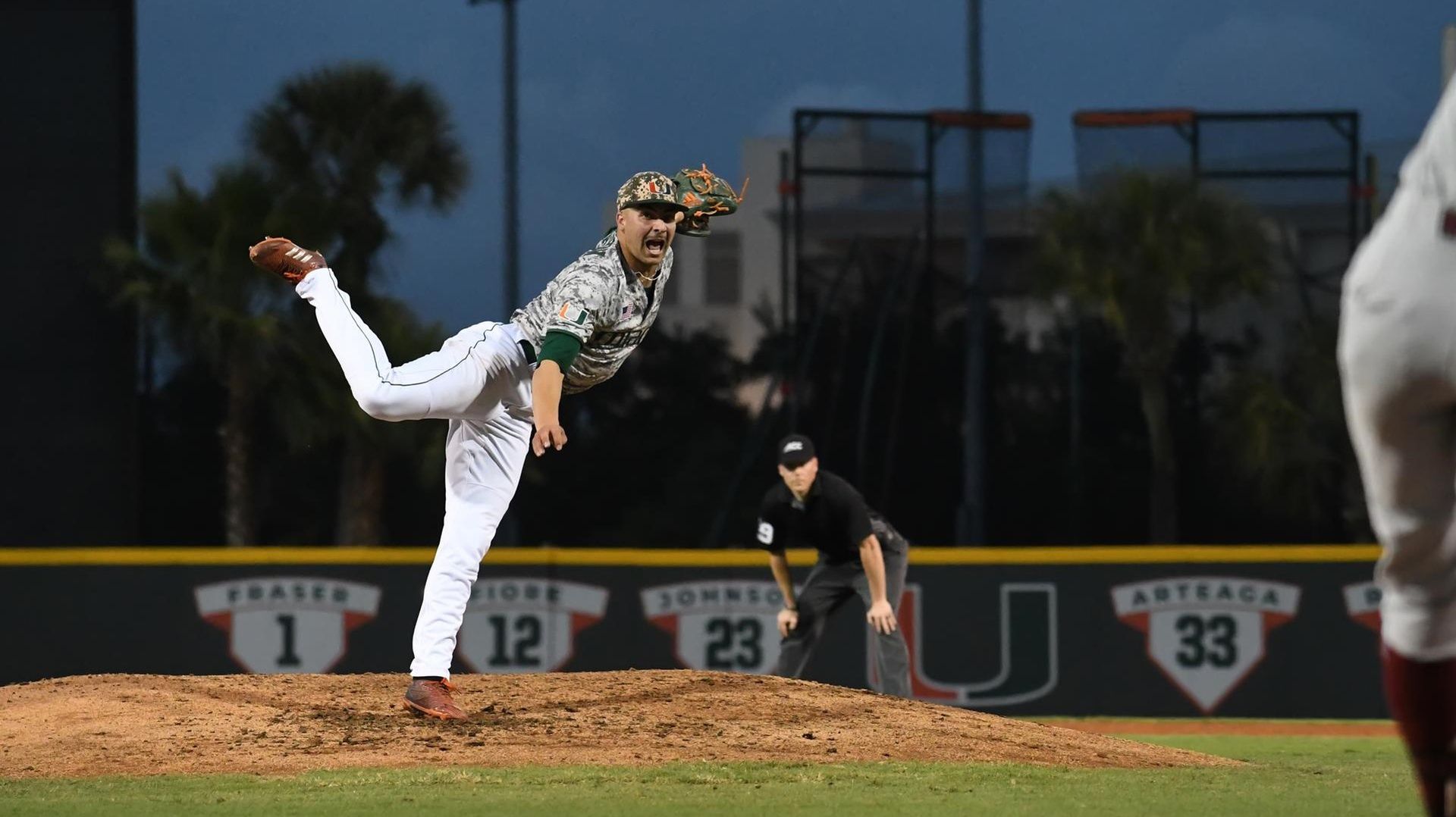 “It’s certainly good to win the series against FSU,” head coach Gino DiMare said. “We haven’t done that in the last few years. They’ve had our number over some time here. We played what I thought was our best game last night, and it was a complete game. Although we didn’t put up as many runs, it was an excellent game on our end. Another complete game.”

McMahon had the breakthrough outing he had been looking for all season and he did it against one of Miami’s biggest rivals. The sophomore right-hander held Florida State (18-12 to just three hits over a season-high seven scoreless innings, while striking out nine to earn his second win of the season.

“This rivalry is huge,” McMahon said. “When I first went out there for the first inning, the crowd was buzzing. Big crowd tonight. It definitely got me amped up.”

The Seminoles appeared poised for a big inning in the top of the third, loading the bases with two outs against Miami’s starter. But McMahon pitched out of the jam, throwing a slider past J.C. Flowers to keep the game scoreless and Miami’s bats rewarded his efforts in the bottom of the inning.

“I do it for them,” Rivera said of his teammates. “We’ve trained our tails off since the fall and this is what we live for. Seeing them come out of the dugout, and helping them out, nothing better.”

Miami’s bats came alive again in the bottom of the fifth, as JP Gates led off the inning with a double to right and scored on Anthony Vilar’s one-out RBI single through the right side that doubled the Canes’ lead.

The Hurricanes added a third run in the fifth after Freddy Zamora beat out Nander De Sedas’ throw to first on a double play ball. The fielder’s choice allowed Jordan Lala to score from third and make it 3-0 in favor of Miami.

The play also resulted in the end of the night for Van Eyk, as FSU head coach Mike Martin elected to replace him with left-hander Clayton Kwiatkowski with Zamora on first, two outs and the left-handed hitting Del Castillo due up.

The lefty-lefty matchup went in favor of the Hurricanes, as Del Castillo hit an RBI single to right-center that sent Zamora home from second and gave Miami a 4-0 lead.

Daniel Federman and Gregory Veliz finished off the shutout, tossing scoreless innings in the eighth and ninth respectively. Miami’s pitchers have now thrown 18.1 straight scoreless innings dating back to the ninth inning of Wednesday’s game against FAU.

“The key is we have to make sure we pitch. Our pitching is better than what it has shown. Now you’re starting to see it the last few outings,” DiMare said. “All in all, we walked three guys as a staff and struck out 12, I’ll take that any time.”

With the victory, the Canes clinched a regular season series against the Seminoles for the first time since 2016.

The Hurricanes and Seminoles will wrap up their annual series Sunday afternoon at 1 p.m. Redshirt junior RHP Brian Van Belle (4-2, 3.23 ERA) will take the mound for Miami opposite sophomore LHP Shane Drohan (2-0, 1.67 ERA).