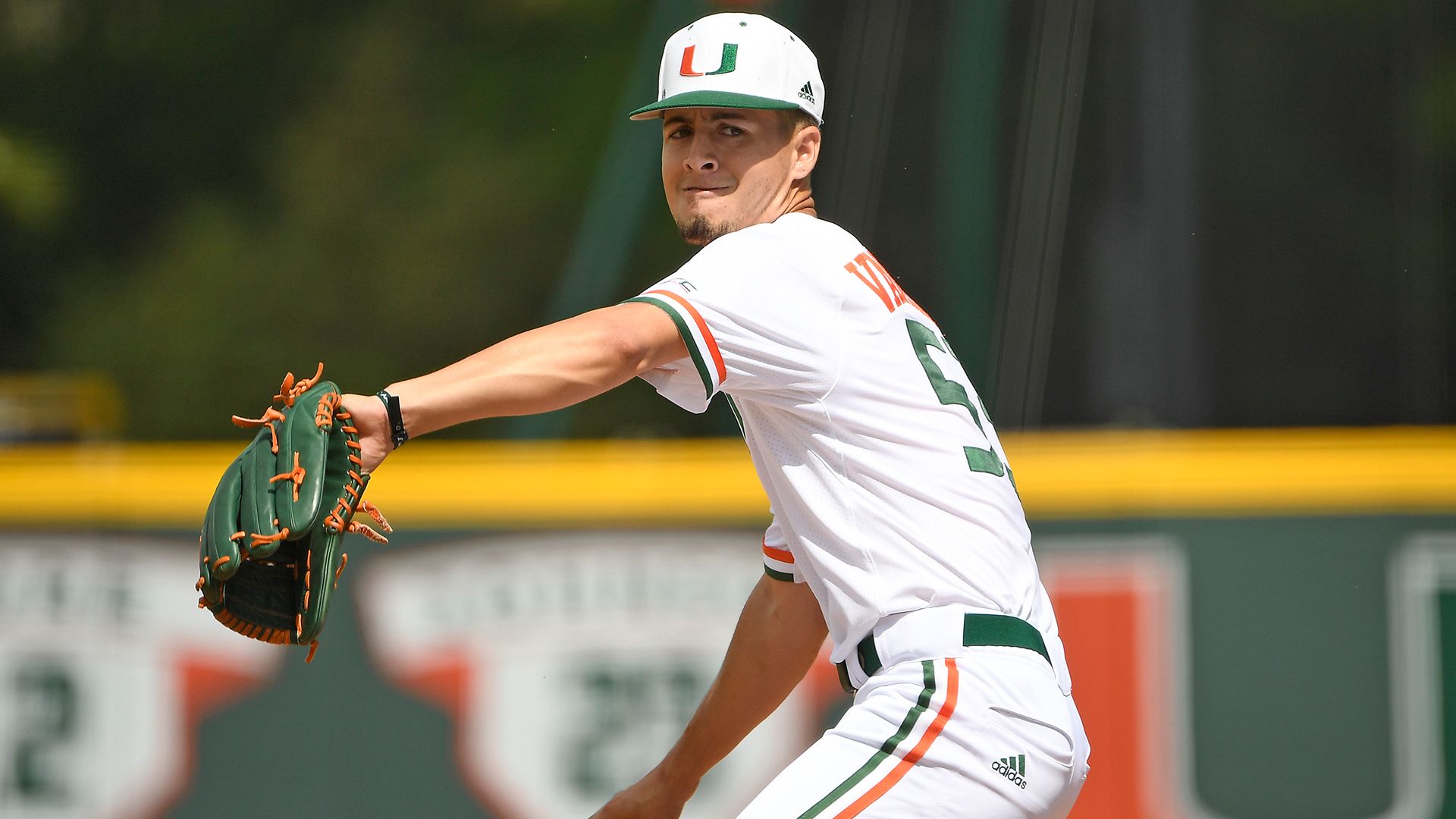 With snow falling and temperatures in the low 30s, the Canes (18-10, 5-7 ACC) got a quality start from right-hander Brian Van Belle and capitalized on opportunities offensively to take the final contest in their three-game set against the Panthers (8-18, 2-10 ACC).

“A great team effort and it’s a big win in tough elements,” head coach Gino DiMare said. “Both teams have to play in it, but most of our guys are from south Florida and this is witout a doubt the coldest game I’m sure they’ve been a part of and that I’ve been a part of. We were playing in snow for half the game and our guys were excited for the opportunity and we played very well.”

Miami put up three runs with two outs against Pitt starter Billy Corcoran in the top of the first, taking advantage of some defensive miscues by the Panthers.

The Hurricanes scored two runs after a throwing error by Pitt third baseman Andres Antonini allowed Raymond Gil to reach and advance to second and both Freddy Zamora and Adrian Del Castillo crossed home plate. JP Gates followed with an infield pop that fell in just beyond the pitcher’s mound and Gil scored to make it 3-0 in favor of Miami.

Pitt got on the scoreboard in the bottom of the third, as Van Belle issued a pair of one-out walks before Sky Duff singled to center to drive home Andres Antonini and cut the Miami lead to two, 3-1.

The Canes answered in the top of the fourth, as Alex Toral led off the inning with a double to left-center off reliever Chris Gomez and scored on a two-out single to short by Anthony Vilar that returned Miami’s lead to three, 4-1.

Van Belle shined on Sunday afternoon, throwing 6.1 solid innings. The redshirt junior, who left the game with runners on second and third and one out in the seventh, scattered six hits and gave up three runs while tying a career-high with nine strikeouts to earn his fourth win of the season.

“He established the inside part of the zone, which is something we didn’t do all weekend. Their hitters were very comfortable off of our pitchers all weekend. I know J.D. told them they needed to be able to pitch inside because that sets everything else up, the changeups, anything off-speed and anything on the outer half of the plate. He did an excellent job of establishing the inside part of the plate and it showed.”

Sophomore Daniel Federman followed Van Belle on the mound for Miami and had a fastball get away from him that hit Gregory Ryan Jr. and loaded the bases.

Pitt then got a pair of runs on an error by Raymond Gil at third that allowed Nico Popa and Bryce O’Farrell to score and bring the Panthers within one. Federman did not rattle easily, getting Cole MacLaren to ground into an inning-ending 6-4-3 double play to preserve the 4-3 lead for the Hurricanes.

Gil made up for the error in the top of the eighth, blasting a leadoff double off Gomez to spark a Miami rally. Gates followed with a base hit to right that moved pinch runner Tyler Paige to third and ended Gomez’s outing after 6+ innings.

An inning later, Federman pitched out of another jam. The sophomore had runners on first and second with one out, but struck out Popa and O’Farrell to strand both runners and maintain Miami’s 5-3 lead.

The Panthers threatened in the ninth, getting a pair of hits off Federman before DiMare called for junior Gregory Veliz to try and get the final two outs of the game. The hard-throwing righty walked MacLaren to load the bases, but struck out Connor Perry and Ron Washington, Jr. to end the game and earn his third save of the year.

“Putting the three runs up in the first set the tone,” DiMare said. “We kept the lead and never relinquished it and getting the runs late was big. Having a two-run lead is a much bigger deal than a one-run lead and it allowed us to do some things there. I was happy for Greg to come in there and close it out.”

Miami is back in action Wednesday, welcoming the FAU Owls to Alex Rodriguez Park at Mark Light Field for the third and final meeting between the two sides in 2019. First pitch is scheduled for 6 p.m.