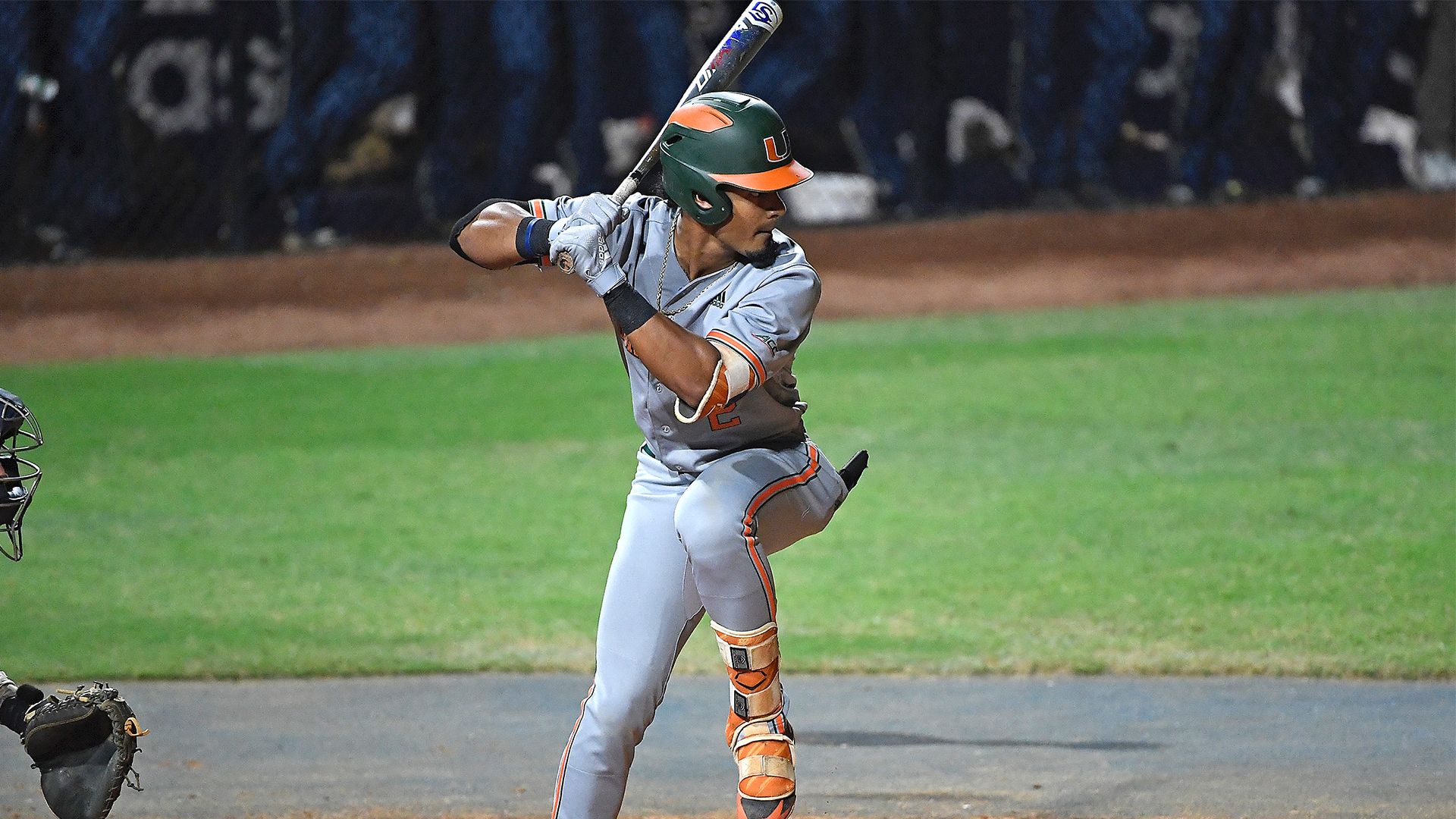 The Hurricanes (17-9, 4-6 ACC) scored three or more runs in four different innings on Friday night. Zamora, who had four hits and a career-best five RBI, delivered nearly every chance he got against the Panthers (7-17, 1-9 ACC).

“Freddy and Del with nine RBI between the two of them  is  absolutely huge,” head coach Gino DiMare said. “Freddy seemed to come up with really big at-bats. He had two strikes on him a bunch of times and fouled off a bunch of pitches and he had a big knock with two outs there, too.”

Miami sent nine men to the plate in the top of the second and scored three runs thanks to a bases-loaded walk by Gabe Rivera and RBI singles from Anthony Vilar and Zamora.

Pitt answered with a run in the bottom of the second, loading the bases after a trio of singles before Sky Duff walked with the bases loaded to push home the Panthers’ first run Miami starter Evan McKendry limited the damage, striking out the next two batters to get out of the jam.

Miami posted another three-run inning in the fourth, as Zamora had an RBI single before Adrian Del Castillo smashed a two-run homer off the parking garage beyond the  right field  fence that made it 6-1 Miami and ended Pitt starter Derek West’s night.

“It was a great job by our offense,” DiMare said. “We walked 13 times, so we had a lot of guys on base, and we had 14 hits. Fortunately for us, that’s what we needed to get it done.”

But the Panthers broke through with a three-run bottom of the fifth that chased McKendry from the game and brought them within two runs. Pitt had its first two batters reach after Ron Washington, Jr. was hit by a pitch and David Yanni walked.

McKendry, who had pitched out of trouble in each of the first three innings, could not hold back Pitt in the fifth. Bryce O’Farrell drove in a run with his third single of the day and Andres Antonini followed with a two-run double off the wall in left field that cut Miami’s lead to two, 6-4.

Pitt continued to charge back in the bottom of the sixth, as Connor Perry brought the Panthers within one with a solo homer off Albert Maury, Jr. The Canes used three pitchers in the inning, as Jeremy Cook walked Washington before being lifted in favor of Daniel Federman. The sophomore right-hander got an inning-ending double play on a lineout to short that halted the Panthers’ momentum.

The Panthers saved a run in the top of the seventh, as JP Gates singled to right with two outs and runners on first and second. Right fielder Nico Popa threw Alex Toral out trying to score from second to end the inning and then led off the bottom of the seventh with a double off the top of the wall in left.

But Federman pitched around the double, ending the inning with strikeouts of Antonini and Gregory Ryan, Jr. to strand Popa at third and protect Miami’s 6-5 lead.

Miami had another big inning in the eighth, scoring four runs and sending 10 hitters to the plate. Zamora started the rally with a bases-loaded, two-run single that was his third hit of the night and drove home his third and fourth runs of the game. An RBI hit from Del Castillo and a bases-loaded walk by JP Gates rounded out the scoring and gave the Hurricanes a 10-5 lead.

“I can’t tell you how huge confidence is to having success,” DiMare said. “We got some of that back with the FAU game and it carried over into this game. We ran into a buzz saw last week in NC State. It’s certainly good to score runs like we have the last two games and we’ve done a pretty good job of scoring for most of the year, but you’re not going to do that all the time. That’s certainly something we need to understand and that’s why it is important to play a complete game. We’ve got to do a better job at doing that.”

But Pitt refused to go away quietly, loading the bases with one out on Tyler Keysor before the right-hander walked Yanni to cut Miami’s lead to four, 10-6. Junior Gregory Veliz replaced Keysor on the mound, but walked the first batter he faced to cut the lead to three. The right-hander settled down and pitched out of the bases loaded jam, striking out Bryce O’Farrell and getting Antonini to fly out to right to end the threat.

Zamora had an RBI double in the ninth that set a new career-high with five RBI in a game, while Del Castillo followed with a sacrifice fly that drove home his career-best fourth RBI of the night. Raymond Gil wrapped up the scoring for the Canes with an RBI single to left that made it 13-7, but Pitt got some momentum going in the bottom of the ninth against Veliz.

The Panthers got back-to-back one-out walks before Perry hit his second home run of the night to make it 13-10. Washington followed with a single and Popa worked a two-out walk to bring the tying run to the plate, but Veliz stuck out O’Farrell to end the rally and secure the series-opening victory for Miami.

Pennsylvania native Chris McMahon (1-2, 4.36 ERA) take the mound on Saturday in a game that was moved up to a noon start due to expected inclement weather later in the day. Redshirt junior Brian Van Belle will start for Miami in Sunday’s finale at 1 p.m.