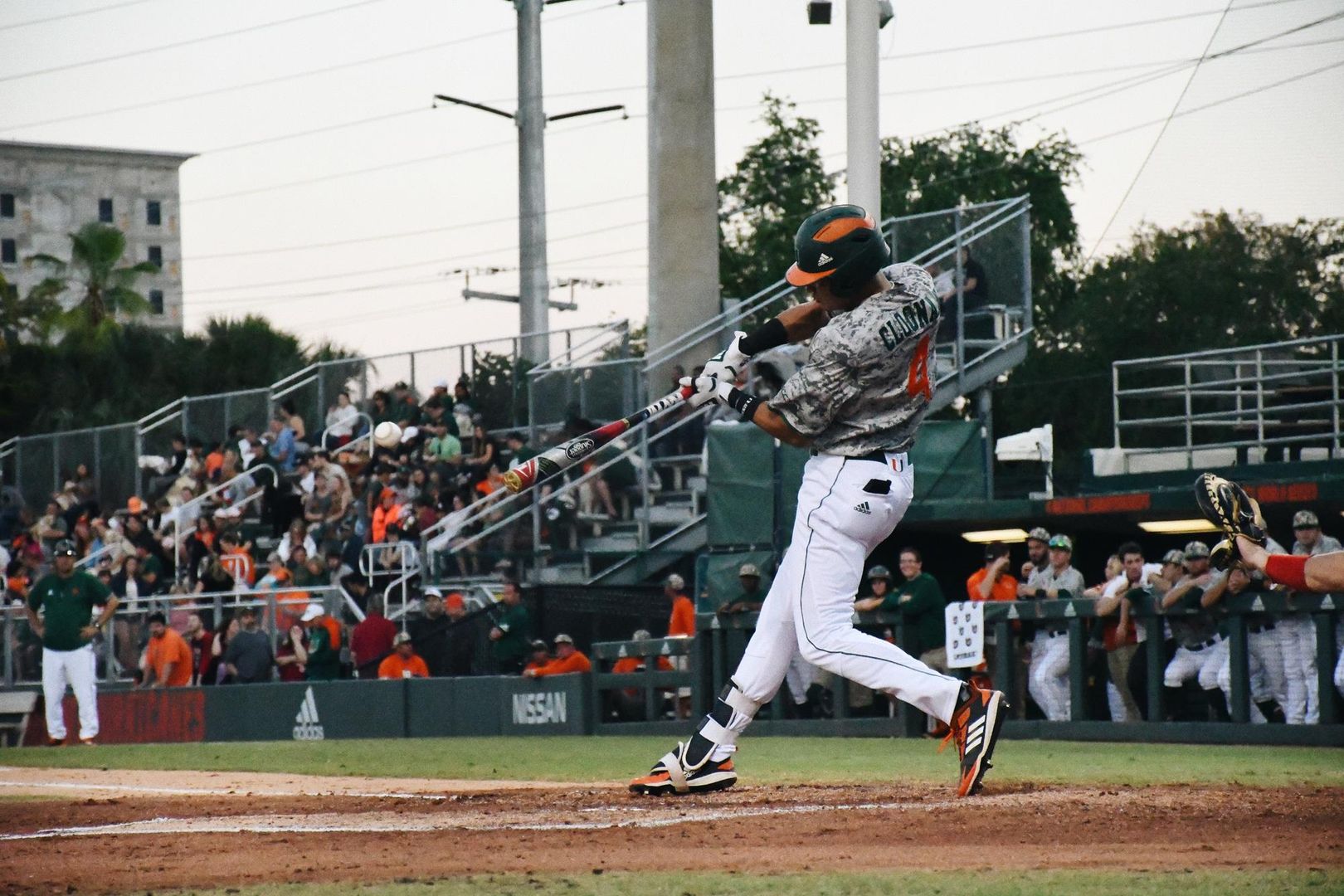 CORAL GABLES, Fla. – The Miami Hurricanes made a ninth inning rally, but came up just short to No. 5 NC State, 7-6.

The Canes (15-8, 3-5 ACC) faced a five-run deficit entering the bottom of the ninth inside Alex Rodriguez Park at Mark Light Field on Saturday night. Miami made a valiant charge at the end and fans in the stands sensed some Mark Light Magic in the air, but the Wolfpack (22-1, 7-1 ACC) stopped the Hurricanes’ comeback effort just before it was completed.

“We can’t be a team that ever gives up,” Miami head coach Gino DiMare said. “I don’t ever want to coach a team like that. At the end of the day, I told the guys I was proud of them for competing all the way to the end. That’s the kind of team we need to be.”

Miami trailed, 5-2 after six innings, but the Wolfpack added a pair of key runs over the final two innings to extend their lead to five. Will Wilson’s ninth inning, two-out solo homer seemed insignificant at the time, as reliever Nick Swiney was shutting the Hurricanes’ offense down after a solid 5.2 innings by starter Reid Johnston.

But the Canes would not give up easily despite the five-run deficit in the ninth.

Michael Amditis smacked a two-run homer off Swiney to give Miami signs of life in the ninth. After an Anthony Vilar single, NC State head coach Elliott Avent brought in closer Dalton Feeney to try and stop Miami’s momentum.

Instead, pinch hitter JP Gates crushed 1-0 fastball for a two-run bomb deep to right field off Feeney to bring Miami within one, 7-6.

“I think what I said in the dugout before we hit in the ninth was, ‘These three outs better be the hardest three outs this guy ever has to make,'” DiMare said. “It worked. He ended up coming out of the game and the brought in the other guy and we got to him a little bit. We hit the balls hard there.”

Two batters later, Freddy Zamora laced a two-out single to left to put the tying run on for the Canes. Adrian Del Castillo, who finished the night 2-for-5 to record his eighth multi-hit game of the year, grounded out to first to end the late rally and give Feeney the save.

While the late-inning fireworks gave Miami its largest single inning of offense, the Canes got on the scoreboard early on Saturday.

Miami manufactured a run in the first against Johnston, as Jordan Lala led off the game with a base hit to right-center and stole second before advancing to third on a Zamora groundout. Del Castillo pushed the speedy Lala home with an RBI groundout to third that gave the Canes a 1-0 lead.

After three no-hit innings, NC State’s bats finally found some success in the fourth against Miami starter Chris McMahon. Jonny Butler led off the inning with a base hit and three batters later Evan Edwards belted a three-run homer to center that put the Wolfpack ahead, 3-1.

“This team, if you make a mistake, they’re going to make you pay with the home run and if there are guys on base then it’s even more,” DiMare said. “We’ve got to minimize those things, but it’s hard to when they hit the ball out of the ballpark. You’ve got to make sure you’re making good pitches. It’s tough. We are working hard to get our runs and they get one swing there and knock three in. Of course, they did the same thing last night with a three-run homer that put them up 5-0.”

The Pack added two more runs in the sixth, as Tyler McDonough smacked an RBI single to left that pushed home Wilson. Patrick Bailey scored after Amditis’ throw to second skipped into center field trying to throw out McDonough and the NC State lead grew to four, 5-1. McMahon finished the night allowed five runs (four earned) on six hits over six innings while striking out nine and walking just one.

But NC State tacked on a run in the eighth off Miami standout reliever Gregory Veliz, snapping a scoreless streak of 8.1 innings by the junior right-hander. Veliz, who struck out the side in the seventh, walked Evan Edwards with one out in the eighth before surrendering a base hit to McDonough and an RBI double off the left field wall by Brad Debo that drove home Edwards and brought the Wolfpack lead to four.

NC State added its final run in the top of the ninth, as Wilson hit a two-out solo homer off Tyler Keysor to give NC State its biggest lead of the night, 7-2.

“There was that big home run in the ninth for them and it end up being the game winner,” DiMare said. “Every run counts. We just told the guys that we’ve got to try to do a better job of playing a complete game.”

The Hurricanes and Wolfpack will return for the series finale Sunday beginning at 1 p.m. at The Light.