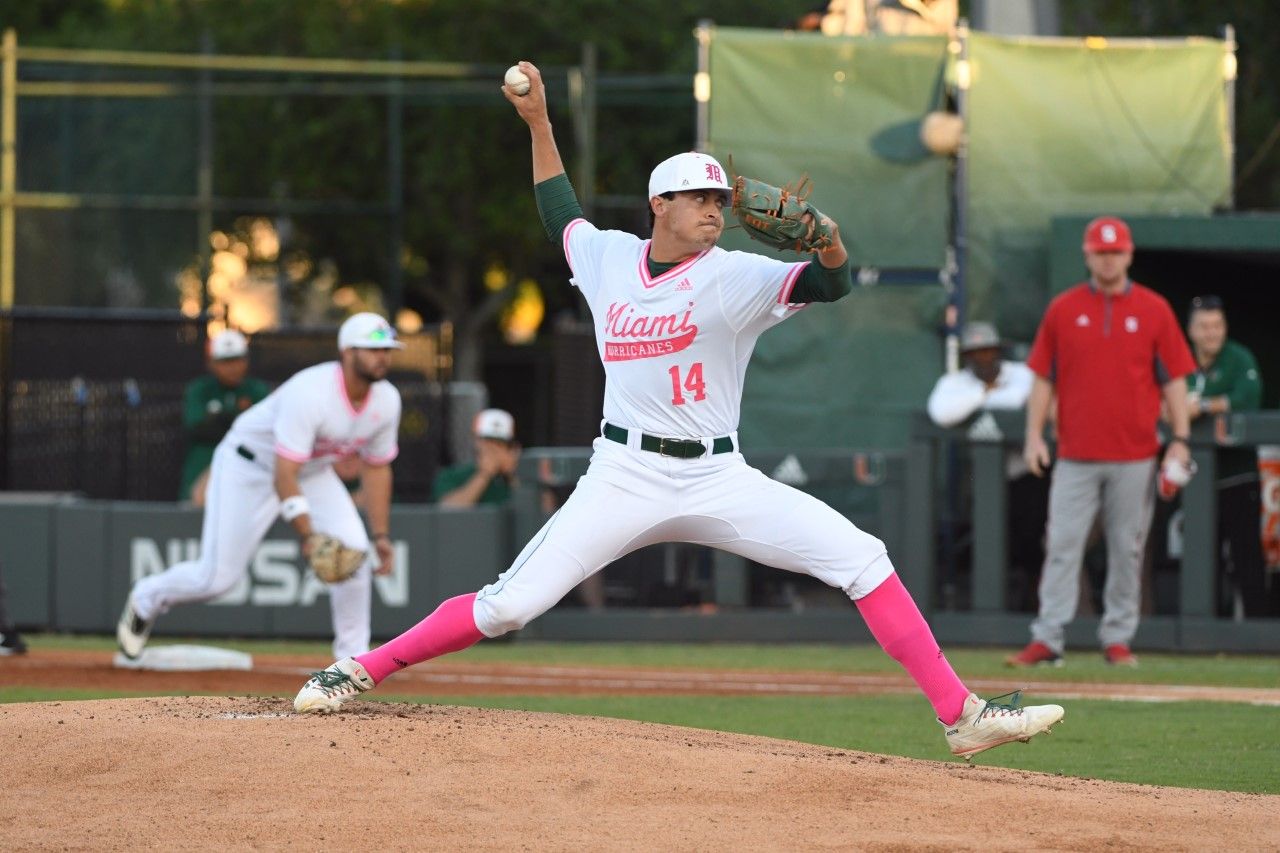 CORAL GABLES, Fla. – In a battle between two of the ACC’s best pitchers, No. 5 NC State mustered a fifth-inning rally to beat the Miami Hurricanes, 6-3.

“At the end of the day, you’re playing a good team,” head coach Gino DiMare said. “They’re 21-1 for a reason. You’ve got to play a solid game, which for the most part we did. We just had that one bad inning.”

Evan McKendry was cruising for 4.2 innings, scattering five hits and striking out nine NC State batters. He was one strike away from his 10thstrikeout and fifth consecutive scoreless inning on Friday before the Wolfpack bats strung together a two-out rally in the fifth.

2018 ACC Freshman of the Year Patrick Bailey doubled on a full count to start the threat. Evan Edwards followed with an RBI double on a 2-2 count to put NC State on the scoreboard. One pitch later, Tyler McDonough singled home Edwards and Brad Debo singled before David Vazquez hit a three-run homer that gave the Wolfpack a 5-0 lead.

“The wheels came off there,” DiMare said. “You can’t give up a big inning to a team like that because they’re a complete team. They’re balanced in their lineup offensively. They’re balanced as a pitching staff. They’ve got lefties – we saw more lefties come out in this game, matchup lefties, than we have probably all year. They brought them in the right situations.”

NC State starter Jason Parker had a solid first four innings, too. The junior right-hander allowed no run on five hits while striking out a pair, but Parker ran into trouble in the fifth just like his counterpart. Parker walked Michael Amditis and hit Tony Jenkins with a pitch to open the fifth inning before NC State head coach Elliott Avent pulled him in favor of sophomore lefty Evan Justice.

The Canes were able to cut into the Wolfpack lead, scoring two runs in the sixth without a hit Freddy Zamora got Miami on the board with a bases-loaded walk and Adrian Del Castillo pushed pinch runner Chet Moore home on an RBI groundout that made it 5-2 after five innings.

The Wolfpack added another run in the seventh, as McDonough doubled home Bailey to give NC State a four-run lead and end McKendry’s night. The junior right-hander finished the night allowing six runs on 12 hits while striking out 11 and walking just one over 6.1 innings.

“If you take away the fifth inning, Evan’s stats are unbelievable,” DiMare said. “He threw six and a third with one walk and 11 strikeouts. But there was that one inning and it all happened with two outs and nobody on and two strikes.”

Alex Toral crushed a solo homer to right in the bottom of the eighth. The sophomore’s 11thhome run of the season cut the NC State lead to three, but the Hurricanes could not get anything else going offensively.

“We walked six times and we got hit a couple times,” DiMare said. “We were on base quite a bit, we just couldn’t get anything going when we got guys on base. We just couldn’t muster it up. We’ve got to turn the page and be ready to play tomorrow.”

Saturday’s first pitch is scheduled for 7 p.m. and the contest will be the first of two Bark in the Park games this year. Sunday’s finale will begin at 1 p.m.