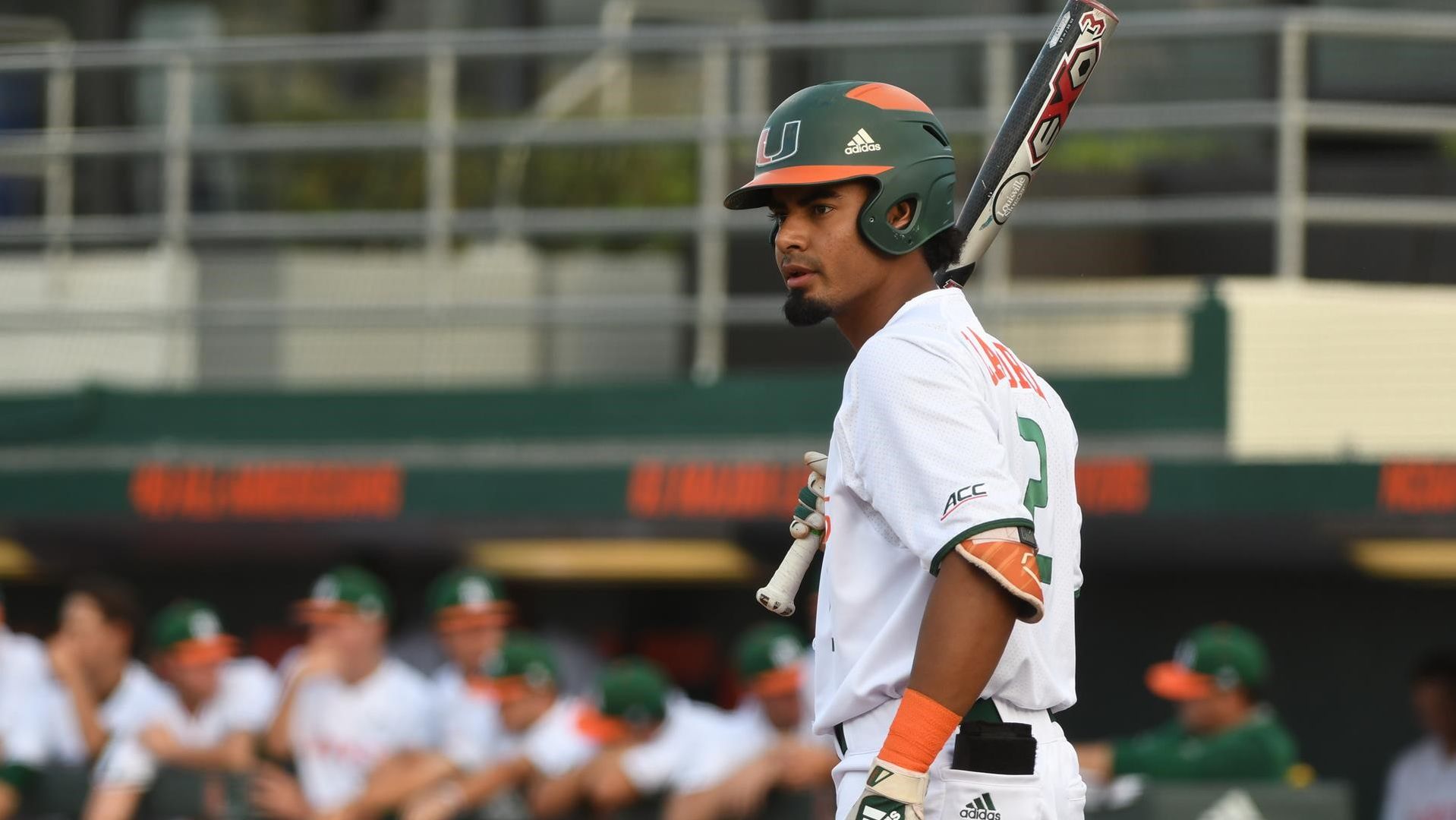 CORAL GABLES, Fla. – The Miami Hurricanes won their first Tuesday midweek game of the year, but it did not come easily.

The Canes (13-3, 2-1 ACC) battled for nine innings against the visiting Jackson State Tigers (6-12, 1-2 SWAC), but came away with a 4-3 win inside Alex Rodriguez Park at Mark Light Field. Miami head coach Gino DiMare was grateful to come away victorious after the Hurricanes struggled for most of the night.

“We just did a lot of things wrong tonight,” DiMare said. “Little things that were big in the grand scheme of things and then it’s a one-run game and anything can happen in a one-run game. I feel very fortunate that we were able to win the game.”

Signs of a rout appeared early as Miami starter Tyler Keysor retired the side in order to open the game and the Canes’ first three hitters all reached base against Jackson State starter Francisco Urena. The junior right-hander walked Jordan Lala, Anthony Vilar and Freddy Zamora to load the bases and JSU head coach Omar Johnson had seen enough.

“We had the bases loaded and nobody out and you feel like, ‘Here we go. We’re going to open it up right out of the gate,'” DiMare said. “I’m thinking we are going to score a bunch of runs and win the game in the first inning and have a chance for a lot of guys to get in the game and play and that was not the case.”

Urena was lifted in favor of right-hander Nikelle Galatas. The Tigers’ reliever limited damage, as only one run scored after a fielder’s choice by Adrian Del Castillo put Miami ahead, 1-0. Del Castillo, who finished the game 0-for-2 with two RBI, saw his 15-game hit streak come to an end. The freshman tied Esteban Tresgallo’s record of 15 consecutive games with a hit to begin a Hurricane career.

“We only got one run out of that inning and the next inning we had first and second and nobody out and didn’t get anything done there,” DiMare said.

Jackson State carried that momentum to the top of the second, as Raul Hernandez hit a solo homer off Keysor to tie the game at one.

The Tigers took the lead in the fourth, loading the bases with no outs before scoring a run as the Hurricanes turned a slick double play. Vilar barehanded a feed from Zamora and fired to first to complete the twin killing, but Jaylyn Williams scored from third to put Jackson State ahead, 2-1.

Galatas’ night ended after four innings of impressive relief. The sophomore right-hander held the Hurricanes to a pair of hits and allowed just one inherited runner to score after entering the game with the bases loaded and no outs in the bottom of the first.

The Hurricanes jumped on lefty reliever Anthony Becerra, plating three runs to regain the lead in the bottom of the fifth. Lala singled and Vilar walked ahead of Zamora, who smacked an RBI double to right that tied the game at two while a pair of sacrifice flies from Del Castillo and Alex Toral put Miami ahead, 4-2.

“We had first and second on a 3-2 count and we put the runners in motion and still couldn’t get it totally right,” DiMare said. “Vilar at first was running and he should have scored but he missed second base because he was looking back to see if the ball was caught.”

Jackson State answered in the top of the sixth against right-hander Albert Maury, taking advantage of a Miami error and cutting the Hurricanes’ lead in half.

Shortstop Wesley Reyes reached base and advance to second thanks to a Zamora throwing error. Reyes advanced to third on a groundout and scored when right fielder Gabe Rivera robbed Hernandez of extra bases with a diving catch, but the JSU shortstop tagged up to score the Tigers’ third run of the night.

Maury got the win on Tuesday, his first of the year, and allowed just one unearned run over two strong innings of relief.

Miami reliever Gregory Veliz followed Maury and was absolutely dominant on Tuesday, striking out all six batters he faced over two innings pitched to protect the Hurricanes’ one-run lead.

“His velocity was very good, we had him up to 98 miles-per-hour, which is amazing,” DiMare said. “I don’t know if I’ve heard that number here. The ball was just jumping out of his hand and his slider was 86 to 88. That’s big, big league stuff right there. Those guys didn’t have a chance.”

The Canes closed out the win with sophomore right-hander Daniel Federman on the mound and he shut down the Tigers in order in the ninth to earn his fourth save of the year.

“Maury, Veliz and Federman were very, very good,” DiMare said. “That was a good positive to see. All of them threw great. We were happy with all their velocities. Maury’s arm is starting to come back. You can see the strength in it and Federman was up to 94, but they were pitching. It wasn’t just velocity. Those guys were throwing strikes, they were pounding the zone exactly how you want your bullpen to throw.”

Freshman right-handed pitcher Slade Cecconi will take the mound on Wednesday for the Hurricanes and he is 2-0 with a 2.65 ERA after four appearances (three starts). First pitch is scheduled for 6 p.m.