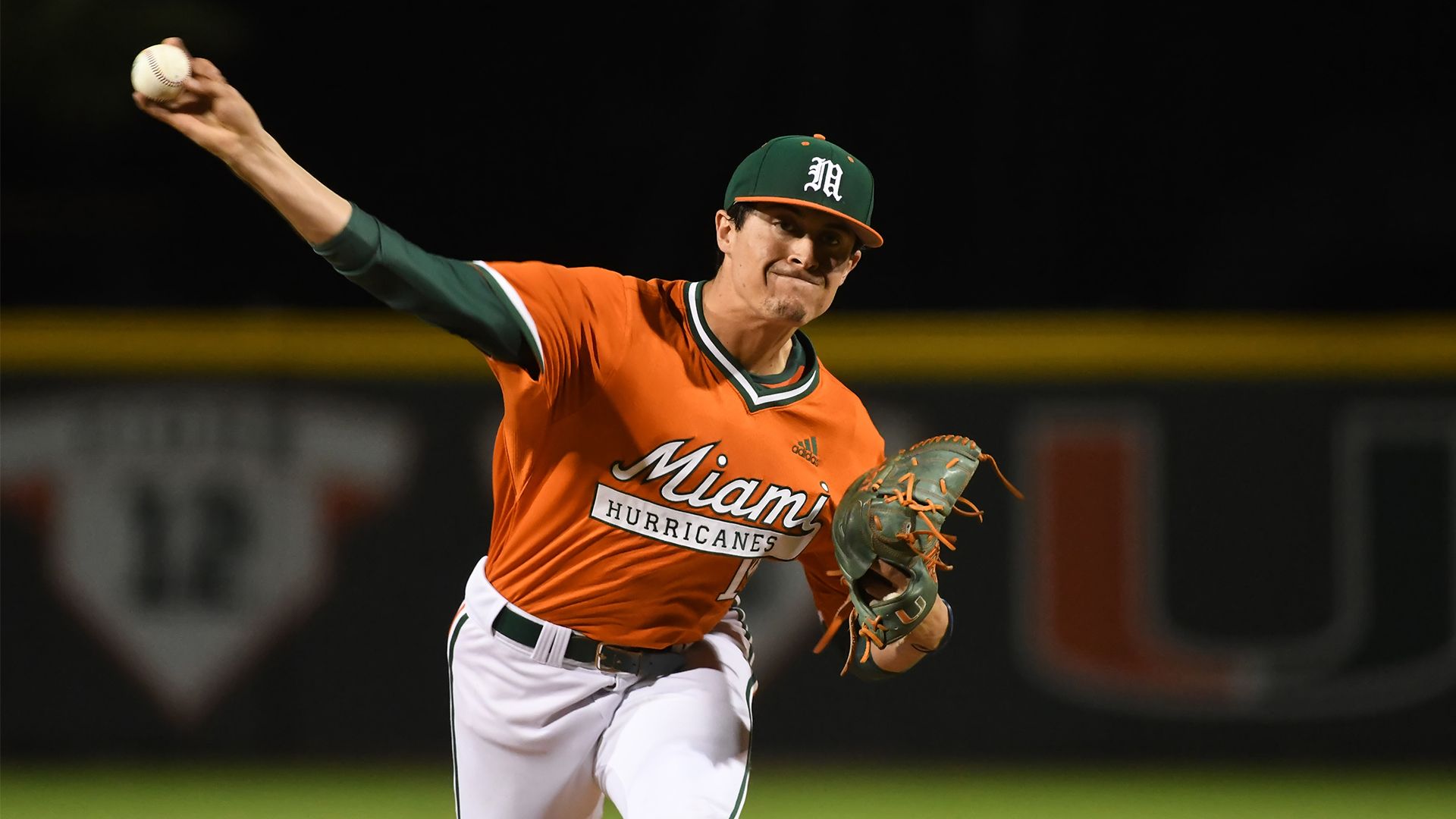 McKendry Shines in 8-2 Win over UMBC

CORAL GABLES, Fla. – Friday’s game got off to a sloppy start, but Miami starter Evan McKendry did not let Miami’s defensive missteps affect him as he led the Hurricanes to a 8-2 win over UMBC.

The Canes (7-2) made four errors in the series opener, but McKendry was stellar once again at Alex Rodriguez Park at Mark Light Field. The junior right-hander earned his third win of the season after holding UMBC (2-2) to just a pair of unearned runs on three hits while striking out eight and walking two over six innings.

“It’s easy to get frustrated but I try not to let it affect me…errors happen, you just have to keep pitching,” McKendry said. “Today I’d say it was more my fastball and slider, usually it is more my change-up. I felt like the first few innings I was struggling with my command, but once I got settled in, I started throwing it a bit better.”

Miami and UMBC combined to commit five errors over the opened 1.5 innings on Friday. UMBC took advantage of a pair of Hurricane errors in the top of the first, as Terrence Pinkston reached base on a potential double play ball that second baseman Anthony Vilar could not handle.

Three batters later leadoff hitter Blaze O’Saben, who beat out an infield single to open the game, scored after Miami shortstop Freddy Zamora bobbled a slow chopper from Christian Torres that put the Retrievers up, 1-0.

“I don’t know if it’s a lack of focus or what,” head coach Gino DiMare said on the fielding performance early. “You can’t do that. We worked a lot on defense in practice yesterday. We didn’t even hit. We’re better than what we show, it’s just a lack of focus and concentration.”

But Miami’s bats made up for the defensive miscues, taking a 4-1 lead after Zamora doubled home Jordan Lala and Adrian Del Castillo singled in Vilar.

Alex Toral followed with an RBI single up the middle that sent Zamora home and Luis Tuero smacked a double that landed just inside the left field line to cap the four-run inning.

But more sloppy play by Miami’s defense helped UMBC score another run in the second, as Tuero dropped a fly ball in right with runners on first and second. The freshman recovered to throw out the runner trying to advance to second, but UMBC had runners at the corners with two outs before Pinkston got an RBI infield hit on a slow roller down the third base line that made it 4-2.

“He got in the lineup because of his bat,” DiMare said of Tuero. “He’s got to get better defensively. We can’t drop fly balls out there. He’s an infielder that we’ve moved to the outfield, so he’s been working hard. It’s a new position for him, but there’s no excuse to drop a fly ball.”

The Canes got that run back in the bottom of the second, as Vilar started the offensive outburst with a one-out RBI single to center that drove home Tony Jenkins from third to make it 5-2 Miami.

Miami added another run in the third, as Tuero doubled to center and Amditis singled him home to give the Canes a four-run lead, 6-2.

After Miami committed three errors over the first two innings, McKendry settled in and retired 12 straight Retrievers before issuing a walk to Raven Beeman with two outs in the sixth.

The Hurricanes picked up their seventh run of the night with two outs in the bottom of the seventh, as Zamora scored from third on a wild pitch by reliever Max Goron. One inning later, Lala singled home Chad Crosbie to make its 8-2 Canes and give Miami a comfortable lead heading to the ninth.

Relievers Tyler Keysor and JP Gates each put up scoreless innings of relief before turning the game over to redshirt sophomore Albert Maury, who made his first appearance in 650 days.

“All the pitchers threw very well,” DiMare said. “We gave up two runs but they weren’t earned. Evan pitched like we always expect him to…Keysor came in and did good…Very happy with Gates, he was the guy who struggled in Gainesville, [tonight] he threw just he has all fall and spring and was one of the most valuable players we had going into the beginning of the season.”

Maury, who was recovering from Tommy John surgery, racked up a pair of strikeouts and retired the side in order.

“The team just voted him game MVP,” DiMare said. “He’s one of the leaders of our team, you can tell they look up to him and like him. We’re so happy to have him back”