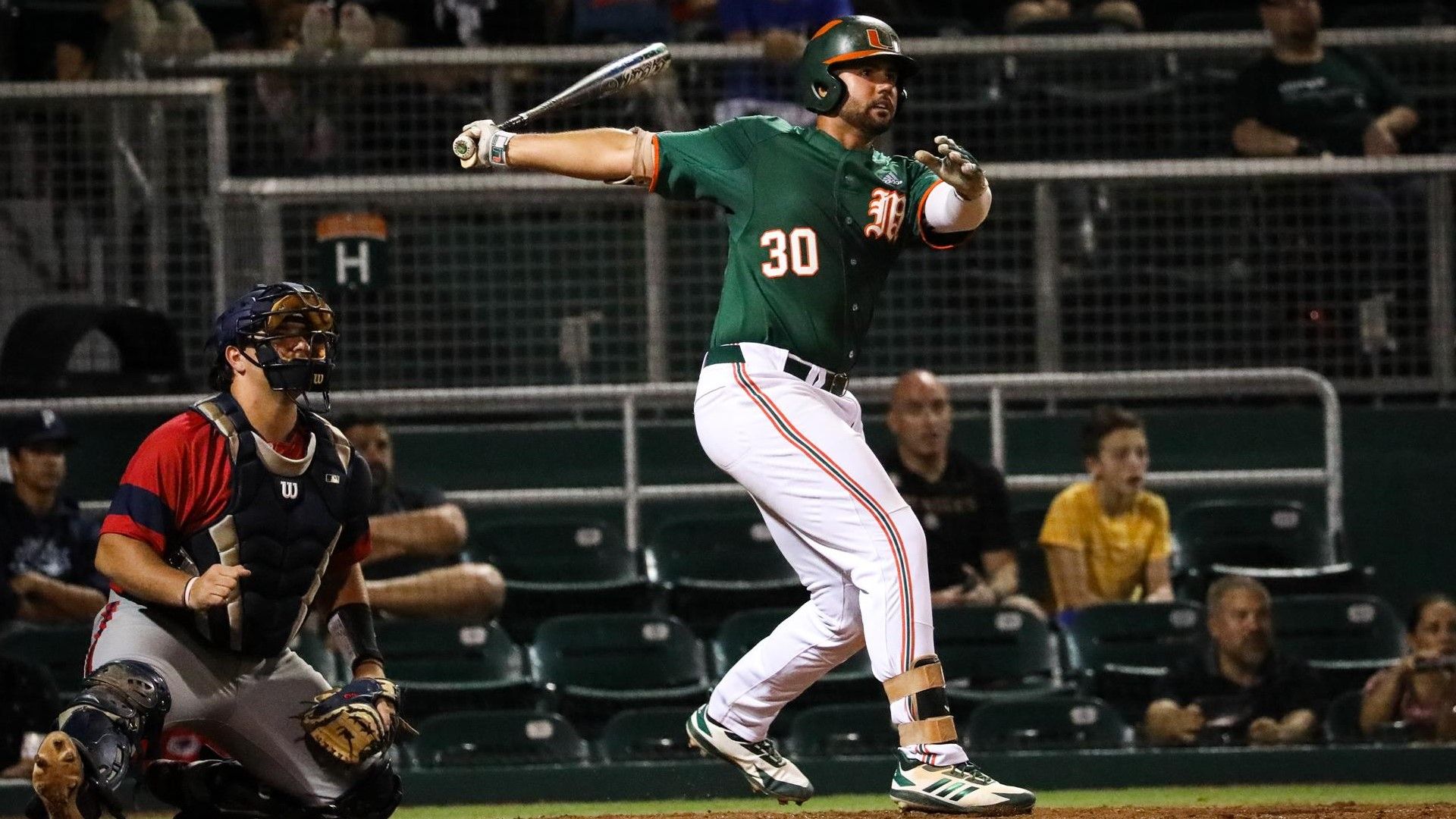 The Hurricanes (4-0) got hot in the middle innings, scoring 10 runs from the third to the sixth to secure their fourth straight victory to open up the 2019 season. The win also snapped a three-game losing streak to FAU (3-1) and insured that Miami would enter the weekend undefeated.

“We have struggled in midweek games, last year we were 3-8,” head coach Gino DiMare said. “We were 0-3 against FAU and we need to play better midweek. It was certainly stressed upon the guys that midweek we need to be more ready to play than we have been in the last couple of years. Last year was really bad at 3-8 and I think we were 10-14 over the last two years. The two years before that we were 19-4 in midweek games, so it’s a big difference. This is a good start to it.”

Alex Toral had his first multi-homer game and finished with three RBI to lead an offense that exploded for nine+ runs for the third time in four games. The sophomore first baseman has now hit four home runs and driven in seven runs over Miami’s first four games of the season.

The Canes got on the board in the bottom of the third. Jordan Lala and Tony Jenkins hit back-to-back singles and a two-out chopper by Freddy Zamora was bobbled by FAU third baseman Joe Montes, allowed Lala to come around to score from second.

Cleanup hitter Adrian Del Castillo made the Owls pay for the error, following Zamora’s at-bat with a two-run double to left that made it 3-0 Hurricanes. Alex Toral drove home Del Castillo four pitches later with a base hit to center.

Montes made up for the error in the top of the fourth, smacking an RBI ground rule double to right that pushed home Pedro Pages to put FAU on the scoreboard. The Owls added another run on a groundout to second, cutting Miami’s lead in half, 4-2.

The Owls tried to cut the lead to one with two outs in the fourth, as Montes tried to score when a pitch got past Amditis. But the Hurricanes’ catcher retrieved the ball and threw a strike to Cecconi covering home, who tagged Montes out before he could touch the plate. FAU head coach John McCormack requested a video review, but the call on the field stood and the inning ended with the Hurricanes leading by two.

“It got me fired up,” Cecconi said. “As soon as I tagged him I got really excited. It got us out of an inning where we started to lose some things and I started to lose some pitches. It would’ve been tying run at the plate if he would’ve scored, so it was a big out. Amditis got back there quick and hustled.”

Miami got the two runs back in the bottom of the fourth when Zamora ripped a two-out double down the line in left field to send home Lala and Jenkins and give the Hurricanes a 6-2 lead. FAU starter Hunter Cooley earned his first collegiate loss, allowing six runs (two earned) on eight hits over 3.2 innings pitched.

In the top of the fifth, FAU added its third run of the night on a sacrifice fly to center by Eric Rivera. But reliever Vladimir Zavala gave that run right back, loading the bases on a pair of walks and a hit-by-pitch before walking Amditis to push home a run and end his outing.

The Canes added two more runs in the fifth thanks sacrifice flies by Lala and Jenkins and Miami turned the game over to its bullpen with a 9-3 lead.

“I think our lineup is tough for pitchers to throw to,” DiMare said. “It makes them work and you can tell it’s taxing on their pitchers. They’ve got to be careful throwing balls over the plate with our hitters, so that makes it tough and stressful on their pitchers.”

Miami added another run in the sixth when Toral crushed a solo homer to right and the sophomore first baseman smashed a solo home to left in the eighth to punctuate the 11-4 win.

Cecconi earned his first collegiate victory after a solid debut, allowing just three runs (two earned) on four hit over five innings. The right-hander had five strikeouts and one hit batter, but did not walk any Owls in his first start for the Canes.

“It felt great being out there on the bump,” Cecconi said. “The defense was making plays behind me and the offense scoring runs for me, it made it easy.”

The Owls added their fourth and final run of the night on an RBI double by Wilfredo Alvarez, but the highlight of the top of the seventh was Raymond Gil’s catch diving into the netting by the third base dugout to snare a foul pop by Rivera.

Relievers Greg Veliz, Tyler Keysor and Mark Mixon combined to hold FAU to one run over the final four innings to wrap up the win for the Hurricanes. Overall, Miami’s pitchers did not allow a hit with two outs and held FAU to just one hit in 10 at-bats with runners in scoring position.

Miami hits the road this weekend for a rivalry series in Gainesville, Fla., against the Florida Gators (3-2). Friday and Saturday’s games are scheduled for 6:30 p.m., while Sunday’s first pitch is at 1 p.m.