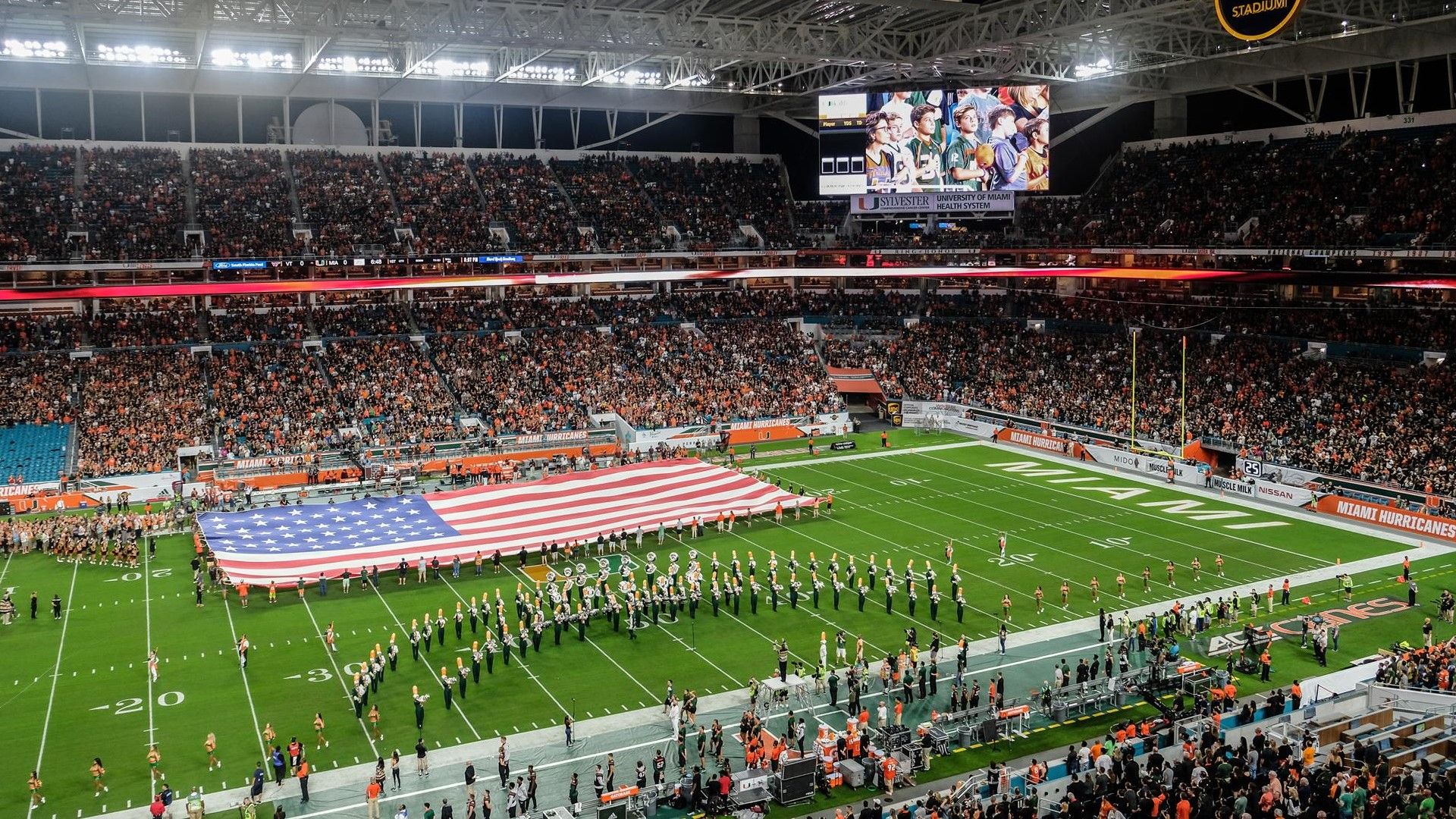 CORAL GABLES, Fla. – The University of Miami released its 2019 football schedule Wednesday, highlighted by a season-opening matchup against Florida in Orlando, as well as six home games at Hard Rock Stadium.

The Hurricanes kick off their 2019 season against the Gators on Saturday, Aug. 31, in the 2019 Camping World Kickoff at Camping World Stadium. Manny Diaz’s first game as head coach of the Hurricanes is also UM’s first meeting with Florida since 2013, a 21-16 Miami win at then-Sun Life Stadium.

This is the first time the two teams have played at a neutral site in the regular season since Miami’s 32-20 win at Tampa Stadium in 1984. The Hurricanes lead the overall series, 29-26, and have won seven of the past eight meetings.

Miami’s home schedule includes non-conference games against Bethune-Cookman and Central Michigan, as well as games against ACC rivals Georgia Tech, Louisville, Virginia and Virginia Tech. The Hurricanes have posted a 16-3 regular season mark at Hard Rock Stadium over the past three seasons. Miami has five consecutive home games on its schedule for the first time since 1987. The Hurricanes open and close conference play with trips to Tobacco Road and play their first-ever game at Marlins Park against FIU. The Hurricanes also have two bye weeks, one on Sept. 28 and another on Nov. 16.

After its season opener against Florida, Miami hits the road for its ACC opener at North Carolina on Sept. 7. The Hurricanes defeated the Tar Heels, 47-10, last season at home to take the lead in the overall series, 11-10.

Miami returns home on Sept. 14 to face Bethune-Cookman, the first of five straight games at Hard Rock Stadium. The Hurricanes have won all four prior meetings with the Wildcats, the most recent a 41-13 victory to begin the 2017 season.

On Sept. 21, the Hurricanes host Central Michigan, marking the first-ever contest between the two programs. Miami is 7-0 all-time versus schools from the Mid-American Conference. Hurricanes offensive coordinator/quarterbacks Dan Enos was Central Michigan’s head coach from 2010-14.

After its first bye week, Miami welcomes Virginia Tech to Hard Rock Stadium on Oct. 5, the earliest matchup between the two ACC Coastal Division rivals since 2009. The Hurricanes have won four of the past five meetings, including a 38-14 victory in Blacksburg last season. Miami then hosts Virginia on Friday night, Oct. 11. UM has won five of seven home games overall against the Cavaliers.

The Hurricanes square off against Georgia Tech to end their five-game home stand on Oct. 19. Miami lost to the Yellow Jackets last season in Atlanta, 27-21, after winning eight of the previous nine matchups.

The Hurricanes then hit the road for four of their last five contests. First up is a trip to Heinz Field in Pittsburgh, Pa., to face the Panthers on Oct. 26. Miami then treks to Tallahassee, Fla., on Nov. 2 for its annual date with Florida State. The Hurricanes have won the last two meetings between the in-state rivals and lead the overall series, 33-30.

After a second bye week, the Hurricanes will travel just eight miles from campus for their penultimate road game of the season on Nov. 23, a date with FIU at Marlins Park — current home of Major League Baseball’s Miami Marlins and former site of the Miami Orange Bowl, where UM played its home games from 1937-2007. Marlins Park opened in 2012 and hosted the Miami Beach Bowl from 2014-16.

This will mark the fourth meeting between Miami and FIU. The Hurricanes have won all three previous matchups, including a 31-17 victory at Hard Rock Stadium last season.

Miami wraps up the 2019 regular season at Duke on Nov. 30. The Hurricanes have lost just once in eight games at Wallace Wade Stadium.

Season tickets are on sale now — visit HurricaneSports.com or call 1-800-GO-CANES for more information. Season ticket prices begin at only $160.