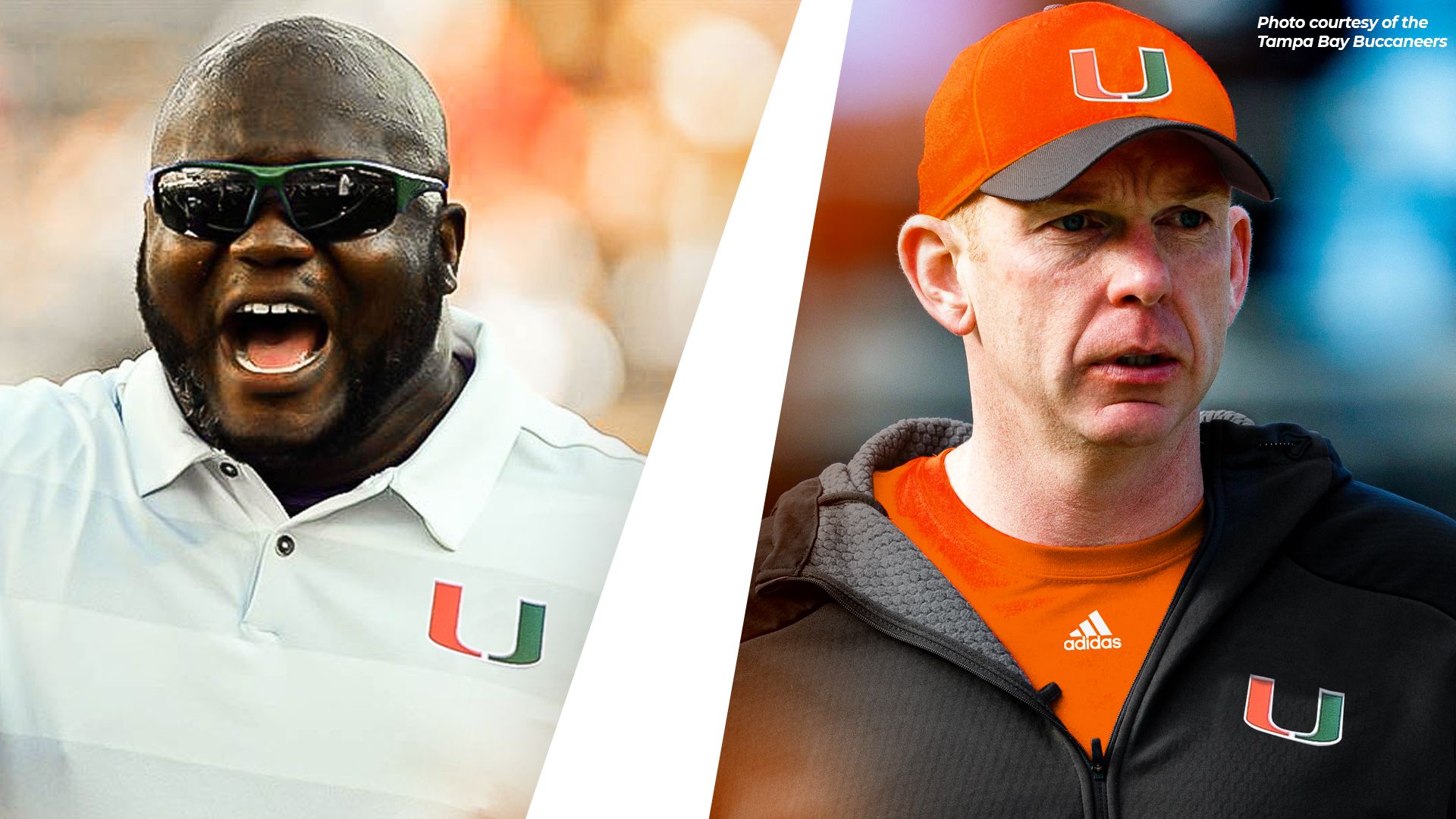 “We’re excited to welcome Eric and Butch to the Miami family,” Diaz said. “Both men are outstanding teachers with diverse coaching backgrounds, and I’m confident they will be tremendous assets to our offensive staff.”

Hickson, a native of Ft. Lauderdale, comes to UM after spending this past season as running backs coach at his alma mater Kansas State. Barry spent the past four seasons as the assistant offensive line coach for the National Football League’s Tampa Bay Buccaneers. He previously coached five seasons at Central Michigan under new Hurricanes offensive coordinator/quarterbacks Dan Enos.

Prior to his one-year coaching stint in Manhattan, Hickson spent three seasons as the running backs coach at Akron, where he helped the Zips earn a pair of bowl berths, including the 2017 campaign in which Akron won the MAC East Division and played in the Boca Raton Bowl.

Hickson joined the Zips after serving as the interim head coach, running backs coach and outgoing recruiting coordinator at Garden City (KS) Community College in 2014. Prior to joining the Broncbusters, Hickson coached at Emmerich Manual High School in Indianapolis for two seasons, serving as the head coach his last year. He launched his coaching career in the high school ranks in South Florida, first as assistant head coach at Coral Springs Charter School (2003-06) and then as running backs and special teams coach at American Heritage (2007-11).

Hickson left Kansas State in 1998 as the school’s all-time leading rusher with 2,537 yards and 26 touchdowns, marks that still rank fifth and seventh in program history, respectively. A three-year starter and two-time team captain, Hickson led the Wildcats in rushing during the 1995, 1997 and 1998 seasons. He signed with the Tampa Bay Buccaneers as an undrafted free agent in 1999, and eventually played in the XFL and Arena Football League.

Hickson and his wife Keisha have one son, Eric, Jr.

Barry helped the Buccaneers average 415.5 yards per game in 2018, good for third in the NFL. In 2017, Tampa Bay amassed 352 first downs, which ranked second in the league, and tackle Donovan Smith started all 16 games for the third consecutive season, joining Paul Gruber as the only players in franchise history to start all 48 games in their first three seasons.

In 2016, Tampa Bay’s offensive line helped the Buccaneers convert a franchise-record 43.9 percent of their third-down attempts. In 2015, his first season with the team, Barry assisted an offensive line that featured two rookie starters, but still managed to block for the NFL’s second-leading rusher (Doug Martin – 1,402 yards) and tied for the fourth-fewest sacks allowed in the league.

Prior to his stint with the Buccaneers, Barry spent five seasons at Central Michigan, serving as offensive line coach in 2014 after coaching the tight ends from 2010-13. In 2014, Barry’s unit paved the way for a 1,000-yard season by running back Thomas Rawls. As tight ends coach, Barry headed a group that combined for 63 receptions for 644 yards and six touchdowns over 2012-13, while helping CMU record another 1,000-yard rusher in Zurlon Tipton, who finished with 1,492 yards and 19 touchdowns in 2012.

Barry played offensive line at CMU, earning Academic All-Mid-American Conference honors as a senior. He and his wife, Andrea, have two daughters, Aislin and Bridget, and a son, Finn.