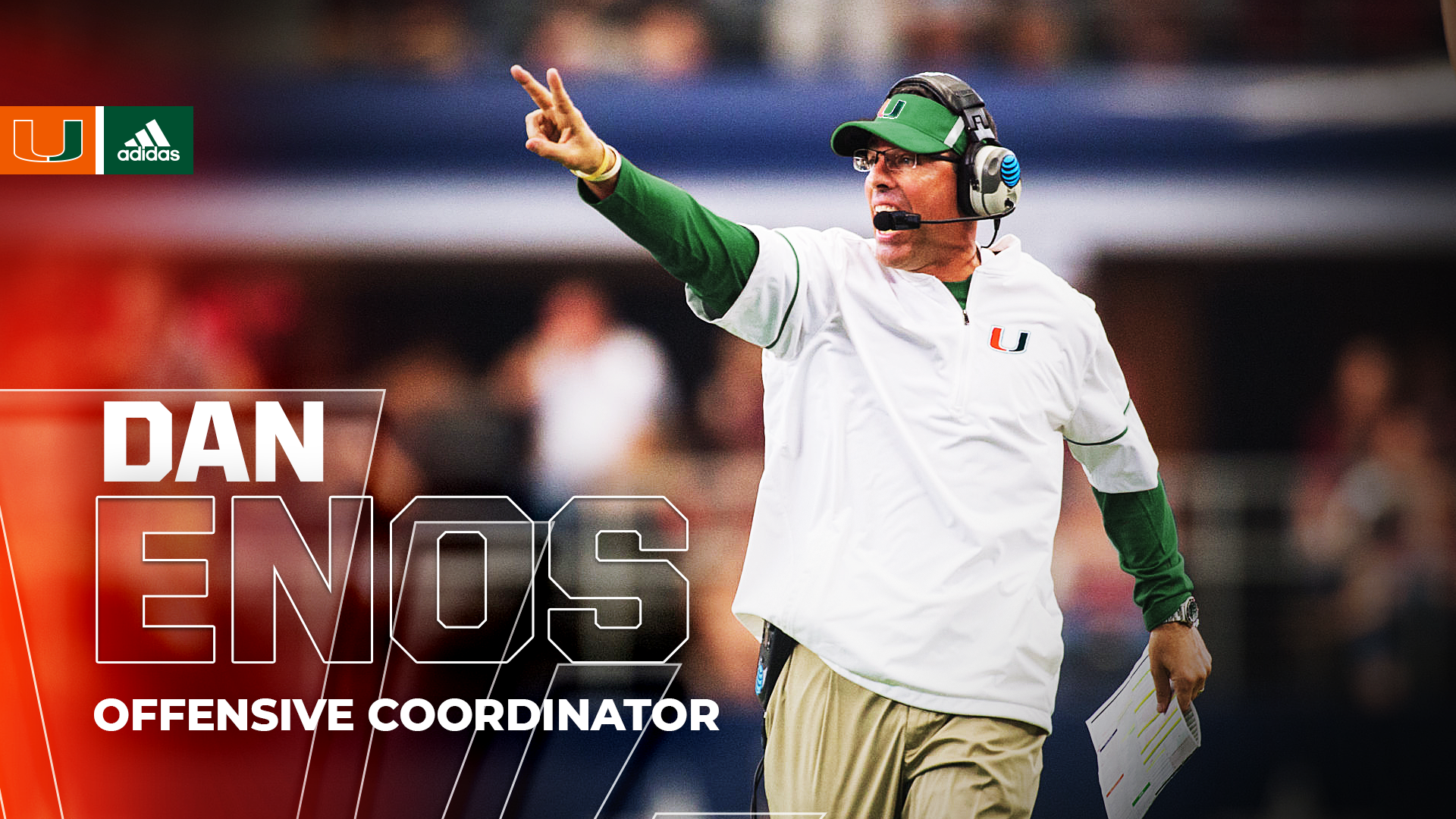 Enos, a 28-year college coaching veteran, spent the 2018 season as associate head coach/quarterbacks at Alabama, which won 14 games and the Southeastern Conference title while advancing to the College Football Playoff national championship game.

“Dan was my primary target for our offensive coordinator position from the outset and I’m thrilled that he’s now a Miami Hurricane,” Diaz said. “Dan is one of the most innovative play-callers in college football and he not only has a remarkable track record of coaching quarterbacks, but also developing players for the NFL at numerous positions. His experience as a head coach will also provide invaluable insight to our entire program.”

A former quarterback at Michigan State, Enos boasts more than a decade of play-calling experience and more than two decades of experience coaching skill position players. Prior to his one-year stint in Tuscaloosa, Enos spent three seasons (2015-17) as the offensive coordinator and quarterbacks coach at Arkansas, where his offenses set school records, and five years (2010-14) as the head coach at Central Michigan, where he led the Chippewas to two bowl games and helped offensive tackle Eric Fisher become the first Mid-American Conference player to ever be selected with the No. 1 overall pick of the NFL Draft.

“I couldn’t be more excited to join a program as rich in tradition as the University of Miami,” Enos said. “Coach Diaz has a clear vision for this program as we move forward and it’s an honor to help build the Hurricanes in his image. This was an opportunity I felt I couldn’t pass up.

“I also want to express my sincere appreciation to Nick Saban and the Alabama program for giving me the opportunity to coach there this past season. I learned so much during my time there and I will always be grateful.”

Last season under Enos’ tutelage, Crimson Tide quarterback Tua Tagovailoa posted one of the best seasons by a quarterback in college football history. Tagovailoa completed 69 percent of his passes, throwing for 3,966 yards with 43 touchdowns and just six interceptions — setting an all-time FBS single-season passer rating mark (199.44). He was named first-team All-SEC, won the Walter Camp and Maxwell Awards, and finished second in the Heisman Trophy balloting. Backup quarterback Jalen Hurts completed 73 percent of his passes with eight touchdowns and two interceptions, helping Alabama rank first in the nation in team passing efficiency. The Crimson Tide also ranked sixth in the country in total offense, sixth in passing offense and third in scoring offense.

Enos served a short stint as an offensive assistant coach at Michigan in January 2018. Prior to that, he directed some of the most prolific offenses in Arkansas history over three seasons in Fayetteville. His 2015 offense set single-season school records for first downs (305) and completion percentage (.658), while posting the second-best total yardage (6,051) and yards per play (6.83) in school history.In 2015 and 2016, the Razorbacks were one of two FBS teams with a 3,000-yard passer and 1,300-yard rusher — featuring a different quarterback and different running back in each season.

Enos helped Brandon Allen (2015) and Austin Allen (2016) throw for 3,000 yards, as the brothers became just the third and fourth players in program history to reach that number in a season. Brandon threw for 3,440 yards and 30 touchdowns as a senior in 2015, while leading the nation in quarterback efficiency. Austin then led the SEC in 2016 with 3,430 yards and was second in the league in touchdowns with 25.

In 2015, Razorbacks tight end Hunter Henry won the John Mackey Award and earned first-team All-America honors. Henry was one of five Arkansas offensive players selected in the 2016 NFL Draft, tied for the second-most nationally. In 2016, running back Rawleigh Williams earned first-team All-SEC honors in 2016 after posting seven 100-yard rushing games and amassing 1,360 yards on the ground.

Enos arrived in Fayetteville after serving as the head coach at Central Michigan from 2010-14. He posted a 26-36 record at CMU, leading the Chippewas to six wins or more in each of his final three seasons. CMU’s win over Western Kentucky in the 2012 Little Caesars Pizza Bowl was just the third bowl win in program history.

In his five seasons in Mount Pleasant, Enos’ offenses passed for more than 3,000 yards four times. Quarterback Ryan Radcliff was the starter from 2010-12, throwing for 9,917 yards and 63 touchdowns during his career. Quarterback Cooper Rush started for Enos as a redshirt freshman in 2013 and then threw for 3,149 yards and 27 touchdowns as a sophomore. Rush eventually set the school record for career passing yards (12,891) and touchdown passes (90), and is currently a member of the Dallas Cowboys. In each of his final two seasons at CMU, Enos helped the Chippewas rank in the top half of the MAC in passing efficiency, third-down conversion percentage and time of possession.

Enos also helped CMU wide receiver Titus Davis finish his career as the school’s all-time leader in receiving yards (3,705) and touchdowns (37), while also setting the single-season mark for scoring receptions with 13. The aforementioned Fisher was selected first overall by the Kansas City Chiefs in the 2013 draft and has started 90 of 94 games in his six seasons with the Chiefs. Overall, Enos coached 23 All-MAC players during his tenure at CMU.

Before being hired at Central Michigan, Enos spent four seasons at Michigan State as an assistant coach. He coached quarterbacks in 2006 and running backs from 2007-09. He tutored three NFL running backs in East Lansing – Javon Ringer, Edwin Baker and Jehuu Caulcrick – and was named one of Rivals.com’s Top 25 recruiters nationally in 2009. In 2006, he mentored quarterback Drew Stanton, who threw for 2,252 yards and 17 touchdowns before being selected in the second round of the 2007 NFL Draft by the Detroit Lions.

A standout quarterback for the Spartans from 1987-90, Enos started two seasons and posted a 16-7-1 record as a starter, leading MSU to victories in the 1989 Aloha Bowl and 1990 Sun Bowl. He still ranks among the best in school history with 3,837 career passing yards and 297 completions. His .621 career completion percentage ranks fourth in Spartan history.