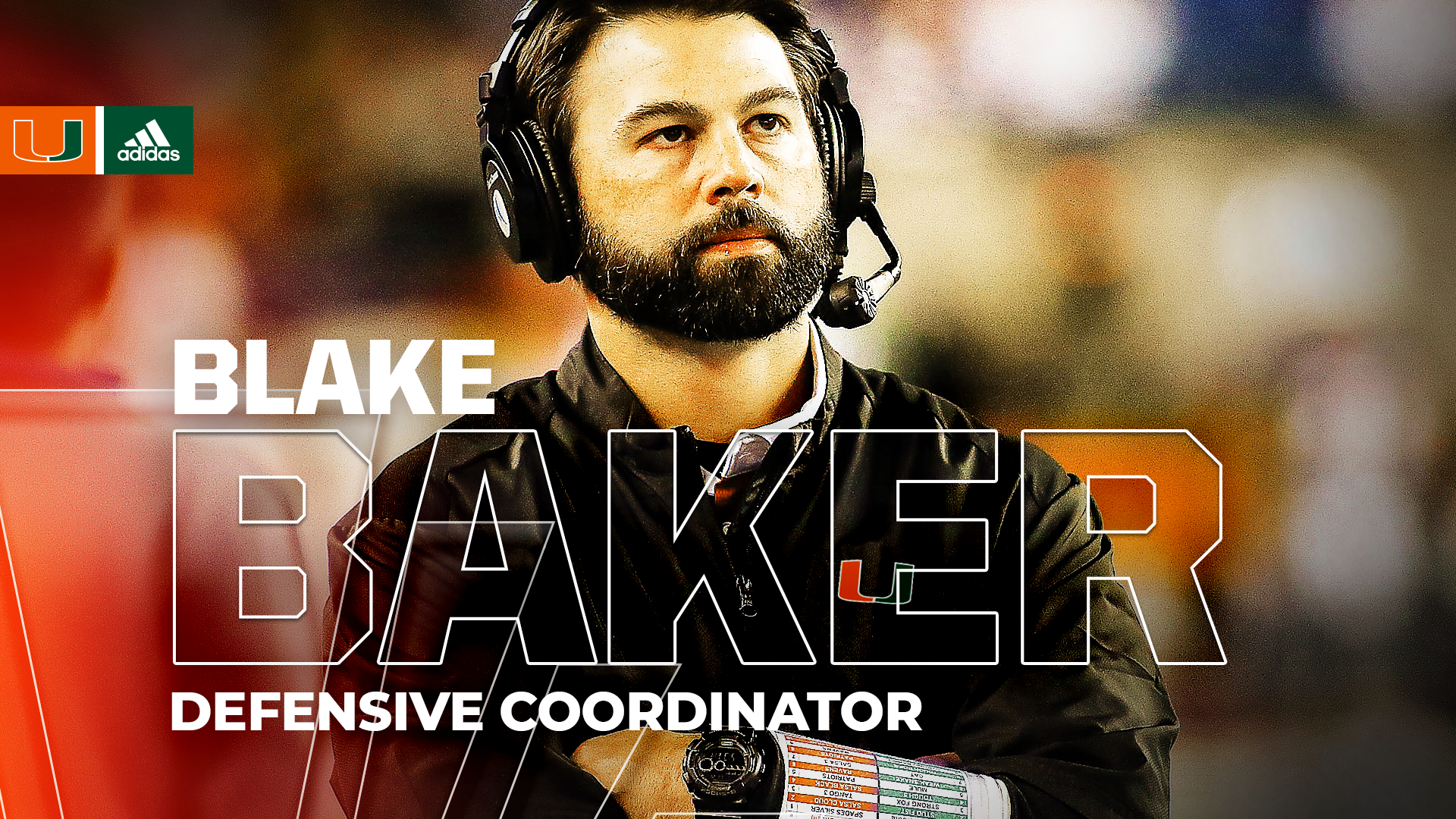 “We’re thrilled to welcome Blake to The U,” Diaz said. “He built and orchestrated a fast, tenacious defense at Louisiana Tech that consistently made big plays. I have watched him grow and develop as a coach throughout his career and I’m confident he will help our defense continue to excel.”

In addition to serving as defensive coordinator, Baker will also coach inside linebackers.

“I’m excited as we move forward with this defensive staff room,” Diaz said. “We have a collection of smart, energetic coaches who I trust and respect, and who I know will ensure that we hold Miami defense to a high standard each and every day.”

“I couldn’t be more excited,” Baker said. “Obviously the opportunity to get back together with Coach Diaz, Coach Banda and Coach Patke, guys I’ve worked with in the past, was important, but also the chance to uphold the winning tradition they’ve had, both since they’ve been here and also historically.

“One thing about the University of Miami, it has forever been known for its defense. I’m grateful to be given the opportunity to lead this unit.”

“Coach Diaz and I have bounced ideas back and forth over the last four years, so I’m excited to sit down and incorporate myself into what they’re doing but also introduce wrinkles of some things we’ve done during my time in Ruston,” Baker said. “It was a great learning experience there. I couldn’t be more grateful to Coach (Skip) Holtz to have been given that opportunity. I’m excited to get back to the meeting rooms, to spend some time with Coach Simpson and Coach Rumph and really get it going.”

Baker went to Louisiana Tech after helping guide Arkansas State to a Sun Belt Conference co-championship and a GoDaddy Bowl win over Ball State in 2013. Baker, who spent one month at Boise State after Arkansas State before joining the Bulldogs staff, coached a squad that was ranked third in the Sun Belt in scoring defense (26.2 points per game) and third in pass defense (232.9 yards per game).

Baker went to Arkansas State after spending 2010 through 2012 as a defensive graduate assistant coach at Texas. He worked closely with the both the Longhorns’ linebackers and defensive backs, two position groups that included eight All-Big 12 selections over the last two years. He also helped coach All-America linebacker and Lott Trophy finalist Emmanuel Acho and cornerback Quandre Diggs, the 2011 Big 12 Defensive Freshman of the Year.

He was a part of the Texas coaching staff in 2011 that led the Longhorns to a No. 11 national ranking in total defense, yielding just 306.8 yards per game. The 2011 Longhorns’ defense also ranked among the top 20 teams in the nation in rush defense (96.2 yards per game), pass efficiency defense (111.0) and tackles for loss (7.4 per game).

Texas won 17 games in Baker’s two years on the coaching staff, including a 21-10 victory over California in the 2011 Bridgepoint Education Holiday Bowl and a 31-27 win against Oregon State in the 2012 Valero Alamo Bowl.

Prior to joining the Texas staff, Baker spent the 2009 season as a wide receivers coach at Clear Springs High School in Houston, Texas, before taking over duties as linebackers coach the following spring.

The Houston native was a four-year letterman and three-year starter at Tulane from 2000-04, helping lead the Green Wave to a win in the 2002 Hawaii Bowl. He earned his bachelor’s degree from Tulane in 2008.

Baker is married to the former Roslyn Jones of Mandeville, La., and the couple has a daughter, Anderson, and a son, Byron.