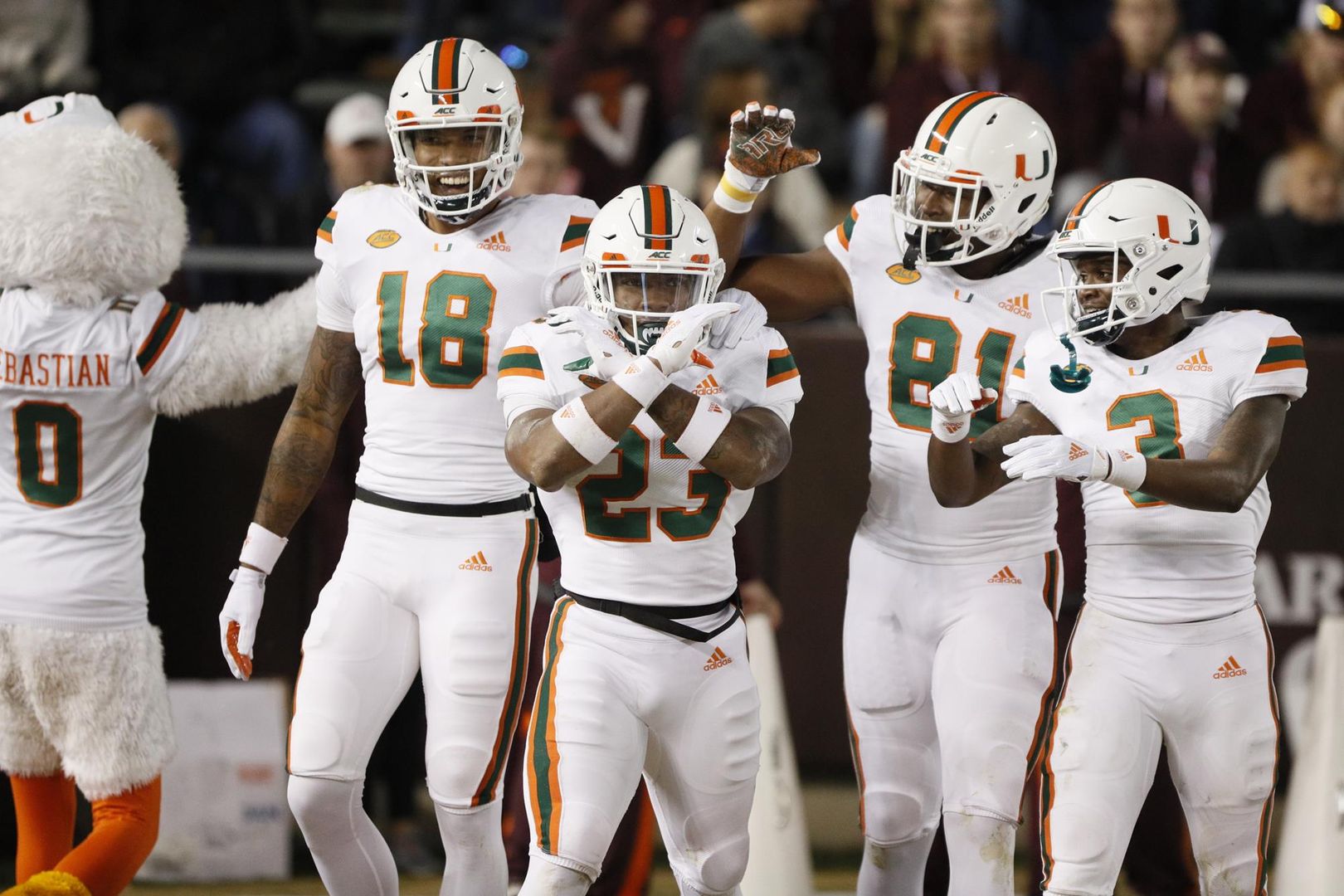 BLACKSBURG, Va. – The Miami Hurricanes got back to their winning ways with an impressive 38-14 victory at Virginia Tech on Saturday.

The Canes (6-5, 3-4 ACC) used a 21-point third quarter to blow past the Hokies and become bowl-eligible for the third straight year under head coach Mark Richt. The victory also ended Miami’s four-game slide and ensured that the Hurricanes would play in a bowl game for the sixth consecutive season.

Miami held a three-point lead at halftime but exploded for three scores over the next 15 minutes of action to put the game out of reach.

A week after scoring his first career touchdown, freshman Cam’Ron Davis made another major impact for the Canes. The running back burst for a 42-yard touchdown that gave Miami a 10-point lead, 24-14, and punctuated an eight-play, 71-yard scoring drive.

Miami’s defense forced its second turnover of the game on VT’s ensuing drive, as Romeo Finley forced Tech’s Damon Hazelton to fumble and Sheldrick Redwine recovered the loose ball to give the Canes possession on the VT 41. Virginia Tech’s defense forced a three-and-out, keeping the Hokies within 10 with 22:19 left in the game.

The Hurricanes defense continued its impressive performance, forcing another Hokie three-and-out. Miami’s Jeff Thomas picked up a Bradburn punt off the bounce and cut towards the Virginia Tech sideline before exploding for a 51-yard return for a touchdown that put Miami ahead, 31-14, and silenced the typically rowdy Lane Stadium crowd. That was VT’s first punt return TD allowed since Maryland’s William Likely’s 63-yard return on Nov. 16, 2013.

After another VT three-and-out, Thomas gave the Canes great starting field position with a 27-yard punt return to the Tech 39. The drive resulted in Miami’s fifth touchdown of the day, as quarterback N’Kosi Perry hit Davis for a 16-yard touchdown that extended the Canes’ lead to 24, 38-14, with 1:17 left in the third quarter.

Davis was one of two players to rush for at least 65 yards on Saturday evening, leading Miami with a career-best 77 yards and one rushing touchdown on just seven carries. Junior running back Travis Homer had 69 rushing yards on 12 carries.

With a little over a minute to go in the game, Jhavonte Dean picked off Willis to force the third takeaway of the day by Miami’s defense and wrap up the Hurricanes’ victory.

Prior to the third quarter, it was a back-and-forth battle between two longtime rivals.

The Hokies got right to work on their opening possession, as quarterback Ryan Willis completed three straight passes for 74 yards to lead Virginia Tech on an explosive opening scoring drive. The five-play, 76-yard drive took just 2:01 and ended with Willis connecting with Dalton Keene for a 15-yard touchdown that put VT up, 7-0.

Miami appeared poised to answer right back, as Perry hit Lawrence Cager on third-and-11 for a 33-yard gain to the VT 20. The Canes reached the VT 11, but a holding penalty followed by a four-yard loss pushed Miami back to the 25 and forced them to settle for a 33-yard field goal by freshman Bubba Baxa that made it 7-3 with 6:29 left in the first quarter.

The Hurricanes’ defense forced consecutive punts to end VT’s next two possessions and forced a key turnover their next time on the field, as linebacker Shaquille Quarterman jumped in front of a Willis pass and returned his first career interception to the VT 3. The junior donned the Turnover Chain for the second straight game and gave the Hurricanes outstanding field position.

One play later, receiver Darrell Langham made an acrobatic one-handed catch in the back right corner of the end zone for a go-ahead 3-yard touchdown that put the Canes up, 10-7, just 32 seconds into the second quarter.

The Hurricanes defense appeared poised to force another punt, but Miami’s Dean was called for pass interference on third-and-10 from the VT 35 that gave the Hokies an automatic first down and they capitalized off the new set of downs. VT marched down the field and regained the lead on a 20-yard touchdown run on a jet sweep by Tre Turner that put Tech ahead, 14-10, with 10:06 remaining until halftime.

A Virginia Tech pass interference penalty extended Miami’s ensuing drive, as Divine Deablo tackled Jeff Thomas as the sophomore receiver beat the Hokies defensive back on a vertical route on third-and-1 from the UM 34. The 15-yard penalty moved Miami near midfield, but the Hokies penetrated Miami’s offensive line one snap later and forced a 15-yard loss that put the Canes 25 yards behind the line to gain and Miami was forced to punt three snaps later.

The UM defense forced a three-and-out, its second of the first half, and the Canes responded with a 10-play, 71-yard scoring drive that ended with a 1-yard touchdown run by Perry that put Miami ahead, 17-14 with 33 seconds left in the half.

Perry was impressive for the Canes on Saturday, finishing the game 21-for-34 for 171 yards and two passing touchdowns. The redshirt freshman completed passed to 12 different Hurricanes, including himself, and also scored his first career rushing touchdown.

Miami’s defense forced three turnovers, two interceptions and a fumble recovery, while adding four sacks and 11 tackles for loss. Six different Canes tied for the team lead with five tackles each, while Joe Jackson led the Canes with 2.5 TFLs and 1.5 sacks.

The Hurricanes totaled 339 yards of offense – 171 passing yards and 168 rushing yards – on Saturday in Blacksburg.