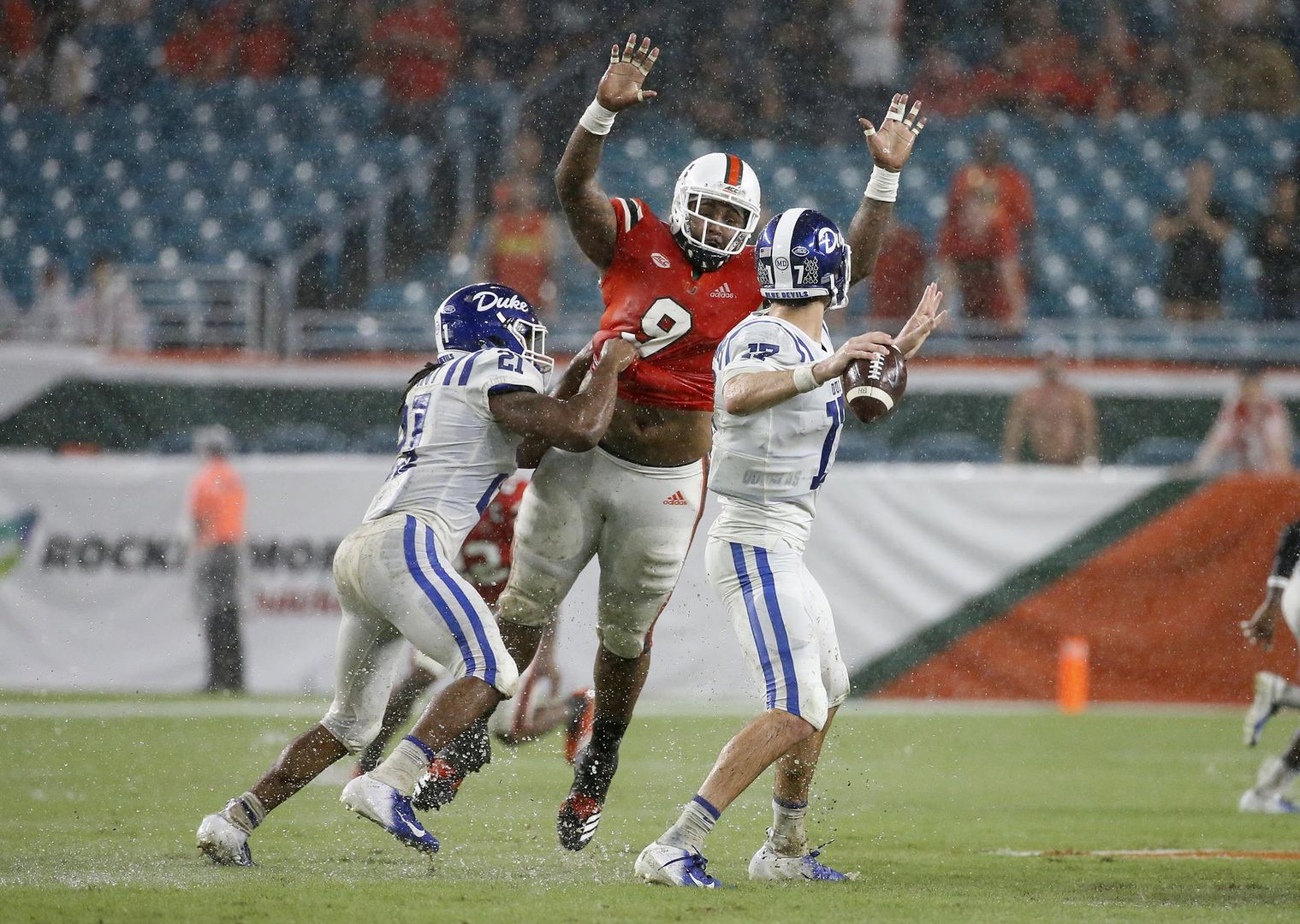 MIAMI GARDENS, Fla. – The Miami Hurricanes battled inclement weather and a tough Duke Blue Devils team, but could not come away with a victory on Saturday, falling 20-12.

“It’s becoming too common to congratulate the opponent first, but I’ll do that,” Miami head coach Mark Richt said. “I’m asking our guys to be men of integrity and I’m going to try to do the same, at this point. Duke did a very good job. They deserved the right to go celebrate. I’m sure they’re doing a good job of that right now. I don’t have a lot of really good answers, right this minute. I’m sure you all have a bunch of questions. It’s just heartbreaking to not be able to get the victory. We put a lot into it and didn’t get it done.”

The Hurricanes appeared in for a battle from the very beginning, as Duke’s Deon Jackson rushed for a 75-yard touchdown on the first play from scrimmage that quieted a loud Hard Rock Stadium crowd of 62,754 and gave the Blue Devils a 7-0 lead just 12 seconds into the game.

After struggling to get going offensively early on, the Canes put together their own breakaway touchdown run in the midst of a torrential downpour. DeeJay Dallas took a handoff from quarterback Malik Rosier and bounced outside for an 83-yard touchdown run that was the sixth-longest rush in program history. Dallas finished the night with a career-high 124 rushing yards and a touchdown, collecting his third 100-yard rushing game of the season and of his career.

Due to the weather, holder Jack Spicer was unable to get a grip of the snap on the point after attempt and Miami trailed, 7-6.

Travis Homer got in on the action on Miami’s next possession, bursting through a hole created by the Canes’ offensive line and sprinting through the deluge for a 43-yard gain to the Duke 39. Two plays later, Rosier hit Lawrence Cager for a 25-yard completion to the Duke 12. Homer finished the six-play, 82-yard scoring drive with a six-yard touchdown run. The Canes failed to convert a two-point attempt and held a 12-7 lead with 7:26 left in the first half.

Homer led the Canes with a season-best 133 rushing yards and a touchdown, giving Miami two 100-yard rushers in the same game for the first time since Mark Walton and Homer accomplished the feat against Bethune-Cookman on Sept. 2, 2017.

“We did move the ball some, and we had some big plays,” Richt said. “We didn’t move it on a consistent basis, for sure. We ran the ball for a couple of hundred yards in the first half in the downpour. It was a different field condition, obviously. It wasn’t ideal conditions to drop back and throw the football, but [Duke] did it pretty well. We had our moments…I can’t give you a good answer right now on that, because I’m sitting here trying to think what happened in practice that may have caused things not to go well, other than we just didn’t do a good enough job. Period.”

The Hurricanes, who entered the game as the national leader in third down conversion percentage defense, allowed Duke to covert just one of eight third downs in the opening 30 minutes of play.

“For us, once it started getting wet they couldn’t throw the ball as much, so it benefited us,” Miami defensive back Jaquan Johnson said. “We locked down, we blitzed and so it benefited the defense.”

Miami’s defense allowed just 115 yards in the first half, and just 40 yards after Duke opened the game with a 75-yard rushing touchdown on its very first offensive play. Gerald Willis III led the Canes with two tackles for loss, including a sack, and raising his season tally to 16.0 TFLs.

UM’s defense extended the streak of Duke punts to eight after forcing the Blue Devils to punt from the UM 33. But Duke got some momentum back when it forced Dallas to fumble and the loose ball was recovered by Duke at the UM 12.

The Canes responded well to the sudden change, as the defense limited the Blue Devils to a 27-yard field goal by Collin Wareham that cut Miami’s lead to two, 12-10, with 9:32 left in the third quarter.

After a constant downpour in the first half, the rain stopped shortly after halftime and Duke got back on track with the improved weather conditions.

Miami drove to the Duke 25 before sending freshman kicker Bubba Baxa out to attempt a 42-yard field goal. The snap was a bit high and Baxa’s kick was blocked by Duke’s Joe Giles-Harris and the Blue Devils took over possession on their own 35 with 3:46 remaining in the third quarter.

The Blue Devils carried the momentum from the blocked field goal and drove down the field for a nine-play, 65-yard scoring drive that ended on a jump pass from Quentin Harris to Daniel Helm for a two-yard touchdown that put Duke ahead, 17-12, with 18 seconds left in the third.

Duke succeeded with the jump pass twice on the drive, first with Jackson completing a throw to Helm on third-and-3 from the UM 15. The ball was batted in the air by Miami’s Jaquan Johnson before landing in Helm’s arms for a 12-yard gain. Two plays later, Harris hit Helm for the go-ahead score.

“It was real frustrating,” Johnson said. “It was a third-down play, could’ve put them in field position to kick a field goal and instead they go and score. So, really disappointing, but that’s just the game of football. Sometimes the ball bounces your way like that.

The Canes benefited from a tipped ball on Duke’s next possession, as Helm couldn’t handle a throw from quarterback Daniel Jones and the ball was snared out of the air by Johnson and returned nine yards to the Miami 32. Johnson donned the Turnover Chain when he returned to the Miami sideline and gave the Canes a boost.

A Duke unnecessary roughness penalty following the interception added 15 yards to the return, but the momentum shift was short-lived as Dallas fumbled for the second time in the game, this time after catching a pass from N’Kosi Perry and the Blue Devils recovered the ball on the Miami 47.

Miami’s defense responded as it had many times before, not allowing a single yard to be gained and forcing Duke’s sixth three-and-out and ninth punt of the game. The Hurricanes took over possession on their own 7 with 12:03 remaining in the game.

Duke forced a three-and-out and took over possession in Miami territory, opening its drive at the UM 44. Jones opened the drive with a 23-yard completion to Johnathan Lloyd to the UM 23. The Blue Devils gained eight more yards before Wareham converted a 33-yard field goal attempt to give Duke a 20-12 lead with 9:14 left to play.

“A lot of fun to kind of be able to grit our teeth, bear down there in the second half and find a way to win,” Jones said. “I think our defense played unbelievable down the stretch, so many stops there, giving us the ball with good field position. We were able to control some time and score a couple of those. Just a lot of credit to the defense and how they played down the stretch.”

The teams traded punts over the next two possessions and Miami regained possession on its own 13 with 4:15 left in the game. Perry converted a fourth-and-3 from the UM 20, hitting Brevin Jordan for a 13-yard gain to extend the drive.

Homer ripped off a 19-yard rush to the Duke 35 and Perry found Mike Harley for a 23-yard gain to the Duke 13 with under 20 seconds remaining in the game.

Perry appeared to throw a touchdown to Cager, but the redshirt junior was called for offensive pass interference and Miami was backed up to the Duke 28 with 10 seconds left to play. Two passes to the end zone fell incomplete and the Blue Devils’ upset victory over Miami was complete.

“It’s upsetting,” Johnson said. “Games like this, you just want to go back to practice and start working again, find a way to get a W.”