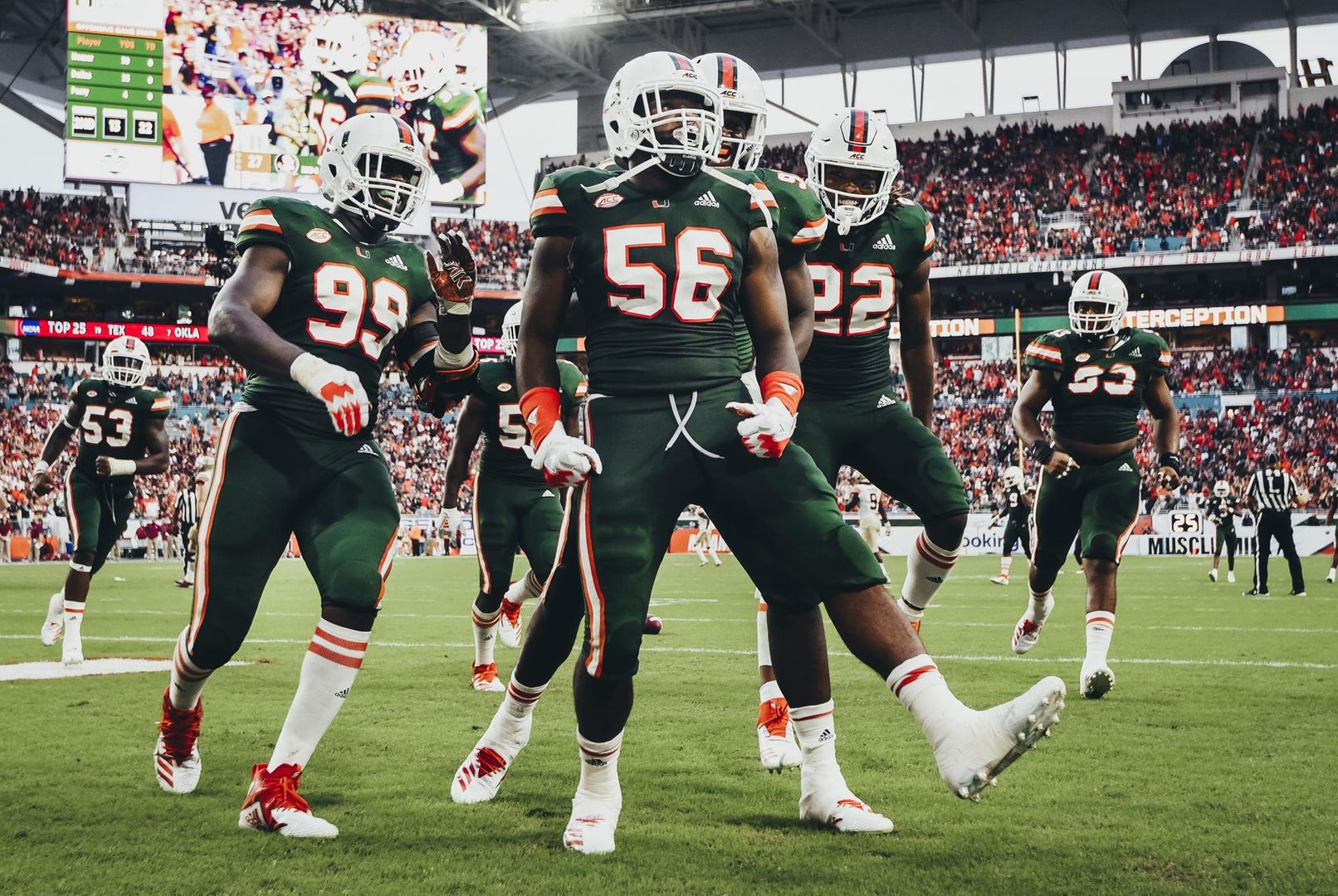 CORAL GABLES, Fla. – The No. 17 Miami Hurricanes entered Saturday’s rivalry game as a heavy favorite over Florida State, but the Canes needed a 21-point second half surge to come away victorious, 28-27, over the Seminoles.

A loud and energetic crowd of 65,490 witnessed the Canes (5-1, 2-0 ACC) earn their first home victory over the Seminoles (3-3, 1-3 ACC) in over a decade. The win was Miami’s first regular season triumph over Florida State at Hard Rock Stadium and it’s first home win in the rivalry series since a 16-10 overtime victory at the Orange Bowl in 2004.

“Well, history has proven that’s the kind of game it’s been,” Miami head coach Mark Richt said. “When you stop a streak, normally it takes something, I’ll say, spectacular. Like, last year, we had lost seven in a row and it took a spectacular play to win the game. And then, we had not won here since 2004—or at least at home since 2004—and that’s unheard of for a team like Miami to go that many years in a series and not win a home game. That’s a long time. So, we broke that streak, but it took another spectacular moment, or moments, to get it done.”

Trailing 27-7 after Florida State’s D.J. Matthews returned a punt 74 yards for a touchdown to give the Seminoles a 20-point lead with 11:52 left in the third quarter, the Hurricanes appeared to be all but sunk.

Things appeared even worse for The U with 8:11 remaining in the third quarter, as Miami’s Derrick Smith was ejected for a targeting penalty after a hit on wide receiver Keith Gavin at the FSU 36. The penalty offset due to a holding call on Florida State, but Smith was disqualified from the remainder of the game.

The Hurricanes’ defense responded violently one snap later, as Sheldrick Redwine drilled Francois for a sack that jarred the ball loose. Gerald Willis III recovered the fumble to earn the first Turnover Chain of his career and give the Canes the ball at the FSU 20 with 6:42 left in the third quarter.

“We got a lot out of it,” defensive lineman Joe Jackson said. “I believe that was our first turnover. That was huge because we needed that chain to get us going. Even if it may not have seemed like it, that changed our momentum in a huge way and in these games, momentum will take you far. So, I was just really thrilled to get off the field, to be honest with you. When he got that sack . . . got the turnover and our offense put the ball in.”

Miami made the most of the turnover, as quarterback N’Kosi Perry hit Lawrence Cager on the second of back-to-back fade routes for a three-yard touchdown to cut the Florida State lead to 13, 27-14, with 4:53 remaining in the third quarter.

“I trust in Cager, obviously, after the drop going right back to him the very next play,” Perry said. “The same as I missed a couple passes, he dropped a couple balls, but he made big plays and he did it there.”

After a Pat Bethel sack of FSU quarterback Deondre Francois on the first play of FSU’s next possession, the Canes forced their second straight turnover when Michael Pinckney picked off the Seminoles quarterback and gave Miami the ball deep in FSU territory. One play later, Perry hit Jeff Thomas for a 17-yard touchdown and Miami was within, six, 27-21, with 4:11 left in the third quarter. The sophomore receiver led all Hurricanes with 76 receiving yards.

“It was just a good play,” Pinckney said. “I watched it a lot on film all week. I knew I had the opportunity to do it. So, I just stepped up. I saw earlier in the game that they made a conversion on third down off that same play, so [it was] just play recognition. We worked on it in practice and I just made a good play.”

Florida State’s offense appeared to score a touchdown on a trick play, as Francois threw a swing pass to Matthews who then threw the ball deep to Gavin for a 39-yard touchdown. The play was called back due to an illegal forward pass by Matthews, but FSU drove to the Miami 26 before kicker Ricky Aguayo missed a 43-yard field goal attempt that gave the Hurricanes the ball on their own 27 with 12:42 remaining in the game.

Miami’s offense continued to attack, as Perry found Thomas deep over the middle of the field for a 32-yard gain and a first down at the FSU 41. One play later, the redshirt freshman completed a ball deep down the left sideline to freshman Brevin Jordan for a career-long 41-yard touchdown that tied the game at 27. Perry finished the game with a career-best four touchdowns, completing 13-of-32 passes for 204 yards.

“I’ve got a lot of trust in Jeff and I knew if I threw him the ball that he would make the play,” Perry said. “He did that. And the one to Brevin, that was the perfect look, the perfect play call for the defense they were in and it worked out perfect.”

Freshman kicker Bubba Baxa converted the PAT and the Hurricanes had their first and only lead of the game, 28-27, with 11:52 remaining in the contest.

“A win is a win,” Pinckney said. “I’m just excited that we snapped that streak. We made that a big thing. We emphasized that we got to win at home. We haven’t won [at home] since ’04. We were little kids. That was a long time ago. We just made it a big thing. We had to win and I’m glad me and my team got the win. So, we’re just going to celebrate and come back focused.”

The Canes missed an opportunity to add on to their lead when they failed to score from the FSU 11. Cager dropped a pass over the middle on third-and-10 and Baxa missed a 28-yard field goal attempt wide right that gave FSU the ball on the Miami 20 with 5:22 left in the game.

Miami’s defense rose to the occasion, forcing a three-and-out that featured a tackle for loss by Willis on first down and a 10-yard sack and forced fumble by Jonathan Garvin on third down.

“We do what we do best,” Jackson said. “Obviously, you want the D-End to be able to rush the passer first and then play the run. So, we knew once we got into league play we’d have our chance to get sacks because, you know, a lot people they don’t want to block against our D-Line in passing [situations]. So, when you get in league play you almost have no choice, especially if you go down, but to pass to go score. So, we knew we had opportunities to go make big plays tonight and that’s what we do. Showed up in a big way.”

A punt out of bounds by FSU’s Logan Tyler gave Miami the ball on the FSU 42 to start the Canes’ next possession and Miami charged down the field, reaching the FSU 1 before moving into its victory formation for the final two snaps of the game to secure the win.

“Tough loss for our football team,” Florida State head coach Willie Taggart said. “We didn’t finish the game in the second half. We did some things that we knew we shouldn’t do. We just turned the ball over. We stressed that all week, not giving up the turnover. We knew how this crowd would get if we turned the ball over. Not only is it good for their football team, but it got the crowd back in it. Second half, we turned the ball over. They got the momentum. We didn’t finish the game like we should have. I thought we did some good things as a team. We didn’t get what we wanted, which was to win. This one’s going to hurt for us for a while.”

Miami held the Seminoles to just 45 yards in the second half, limiting Florida State to a meager 1.5 yards per play over the final 30 minutes of action. Jaquan Johnson led all Hurricanes with 10 tackles (seven solo) and the senior safety gave a passionate halftime speech that helped rally the Hurricanes together ahead of their second half surge.

“Basically I told them we couldn’t lose this game,” Johnson said. “I told them it was my senior year—it was a bunch of our senior years and we need to play to our standards. We were playing undisciplined. We weren’t playing Miami football. That was basically what I told them in the locker room.”

The Canes’ defense wreaked havoc in the Seminoles backfield, totaling 12 tackles for loss and six sacks, two forced fumbles and one interception in the game. The six-sack performance was the Hurricanes’ first since they tallied six at FAU in 2016. Joe Jackson led Miami with 2.5 tackles for loss and tied a career-best with two sacks on Saturday.

While Miami was dominant in the second half, the opening 30 minutes of action were heavily favorable to Florida State. The Seminoles scored first on Saturday, with Gavin hauling in a 17-yard touchdown that put FSU ahead, 7-0, just over five minutes into the game.

Miami evened the score at 7 after a methodical 14-play, 83-yard scoring drive that ended with a 10-yard touchdown from Perry to Cager with 11:26 left in the opening half. The Hurricanes converted three third downs and a fourth down en route to their first score of the game.

“It was just unbelievable,” Perry said. “I couldn’t believe that it was happening that way. I actually thought we were going to come out here and dominate the whole game, but it didn’t go like that. We had to stay together and fight back, and that’s what we did.”

The Hurricanes appeared poised for another drive deep into Florida State territory when Perry hit Thomas for a 27-yard gain on second-and-10 from the UM 20 that pushed the Canes near midfield. But one play later, FSU’s Brian Burns strip-sacked Perry and Florida State’s DeCalon Brooks recovered the fumble to give the Noles the ball on the Miami 43.

The turnover resulted in three points for Florida State, as Aguayo converted a 42-yard field goal attempt that put FSU back ahead, 10-7, with 4:20 left in the half.

After forcing a Miami punt on the next possession, the Seminoles increased their lead to 10 when Tamorrion Terry caught a 17-yard touchdown from Francois to give Florida State a 17-7 lead with 1:32 remaining in the half.

With 41 seconds left in the half, the Hurricanes tried to convert a fourth-and-3 from the FSU 48 and Perry could not connect with freshman receiver Dee Wiggins. The Seminoles took over possession on downs and Francois connected with Terry for a 20-yard gain before Aguayo hit a 54-yard field goal as time expired on the first half to send Florida State into the locker room with a 20-7 lead.

“In the locker room, obviously a lot of us were upset, but we weren’t panicking,” Jackson said. “We just kept our head straight. Jaquan Johnson came in, gave us the talk that we needed. I think get everybody going for the second half. We came out and played big; that’s the reason why we won.”

Despite the difficult first half, the Hurricanes rallied to protect their home field and extend their active home winning streak to 13 straight games.

‘Everything was against us,” Johnson said. “Special teams, they were bad. Offense wasn’t really moving the ball like how we should. Defense wasn’t getting turnovers at the beginning of the game like we knew how. And for us, it just flipped that in the second half and we became a totally different team. I mean, there’s four quarters of football. That’s why we love football.”

Miami is 15-2 in regular season home games at Hard Rock Stadium since Richt took over ahead of the 2016 season.

“I never doubted,” Johnson said. “I never retreated. I never thought of surrendering. The main thing was the main thing and that was to get the ‘W’ against FSU.”