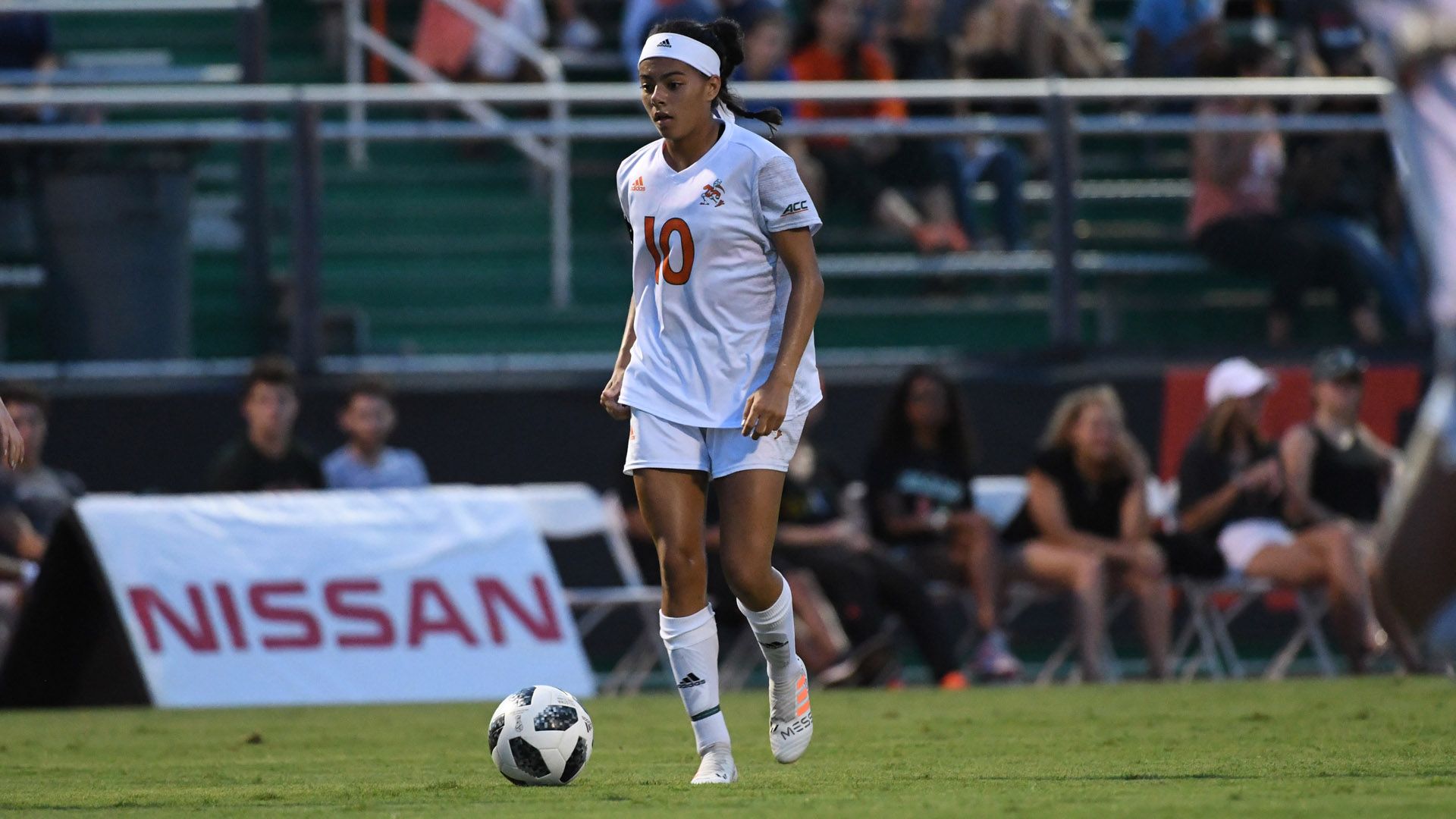 The Hurricanes (3-5-2, 0-2-0 ACC) held the Blue Devils scoreless through the first 43 minutes of action but a late first half goal proved to be the difference.

“I thought defensively there were some really good moments. Obviously, we had a couple errors and they were excellent at capitalizing on them. But I thought we frustrated them a little bit,” head coach Sarah Barnes said. “Unfortunately, their first goal came off of us rushing a free kick with 90 seconds left in the half, which we were trying to stop and they got us in transition. Regardless, we had chances in the second half, but I think that changed the game a little bit.”

Miami received the first scoring opportunity of the match off of a corner from senior midfielder Jamie Brunworth. After taking a couple bounces in the box, freshman defender Selena Fortich found the ball at her feet and ripped a shot which just scraped past the crossbar.

In the ninth minute, Duke (8-1-1, 2-0-0 ACC) countered with a run down the far sideline sending a ball towards the head of Delaney Graham, but her shot was saved by redshirt senior goalkeeper Phallon Tullis-Joyce.

Four minutes later, junior midfielder Kristina Fisher made a great run towards the top of the 18 and drilled a shot on net. However, the Blue Devils keeper, Brooke Heinsohn, was there to make the stop.

Off of a corner in the 18th minute, Tullis-Joyce again was challenged when Taylor Mitchell directed a header on target. However, the Shoreham, N.Y., native was able to corral the ball with ease.

In the 21st minute, Fisher received another chance to put the Hurricanes in front but was unable to get her shot attempt to hit the target.

Six minutes later, Fisher made a move to get around a Blue Devils defender and connected with sophomore midfielder Alexa Ferreira, at the top of the 18, whose shot missed wide of the net.

Capitalizing off a counter-attack, Duke’s Mackenzie Pluck sent a long ground ball in space towards Tess Boade, who took a touch before finessing the ball past Tullis-Joyce placing the Blue Devils in front with less than two minutes remaining in the opening stanza.

Immediately out of the break, Duke looked to extend its lead sending a long ball towards the end line which resulted in a corner. Off of the corner, senior defender Maisie Baker was able to clear the ball out of harm’s way.

In the 52nd minute, Fisher again found space to get a shot off, but Heinsohn stepped up to make her second save of the match.

In the 59th minute, Duke’s Karlie Paschall sailed a long ball over the top of the Canes’ defense towards Taylor Racioppi. The senior curled a shot towards the far right post, to place the Blue Devils in front, 2-0.

Eight minutes later, Fisher made a move past a Duke defender before being dragged down in the box to set up a penalty kick opportunity for Miami. Stepping up to the line, the junior directed a shot on goal, but Heinsohn made a tremendous save to keep the ball out of the net.

Off of the ensuing corner, Fortich sent a shot on net while Heinsohn was out of position but a Duke defender stepped in front of the shot to prevent the goal-scoring opportunity.

Overall, Miami outshot Duke, 11-6, while the Blue Devils held the advantage in shots on goal, 5-4.

“Again, I thought defensively there were some really good moments and some really good pictures of us frustrating a very talented team. I thought offensively, we showed more composure, more patience, than we have shown all season long from start to finish,” Barnes said. “Bottom line is, in both boxes we just haven’t been good enough. We have got to capitalize when we have the opportunities. And I thought that tonight we had as many [opportunities] as they did, we just have to be better at stopping theirs. So that is a learning experience that we have to continue to go through and fine tune.”

Fisher led the way for the Hurricanes with five attempts and a trio of shots on net. The junior now has 115 shots through 45 career matches, moving into a tie for ninth on the team’s all-time list with Nina Wathne.

Miami will return to Cobb Stadium Sunday at noon against Virginia Tech.