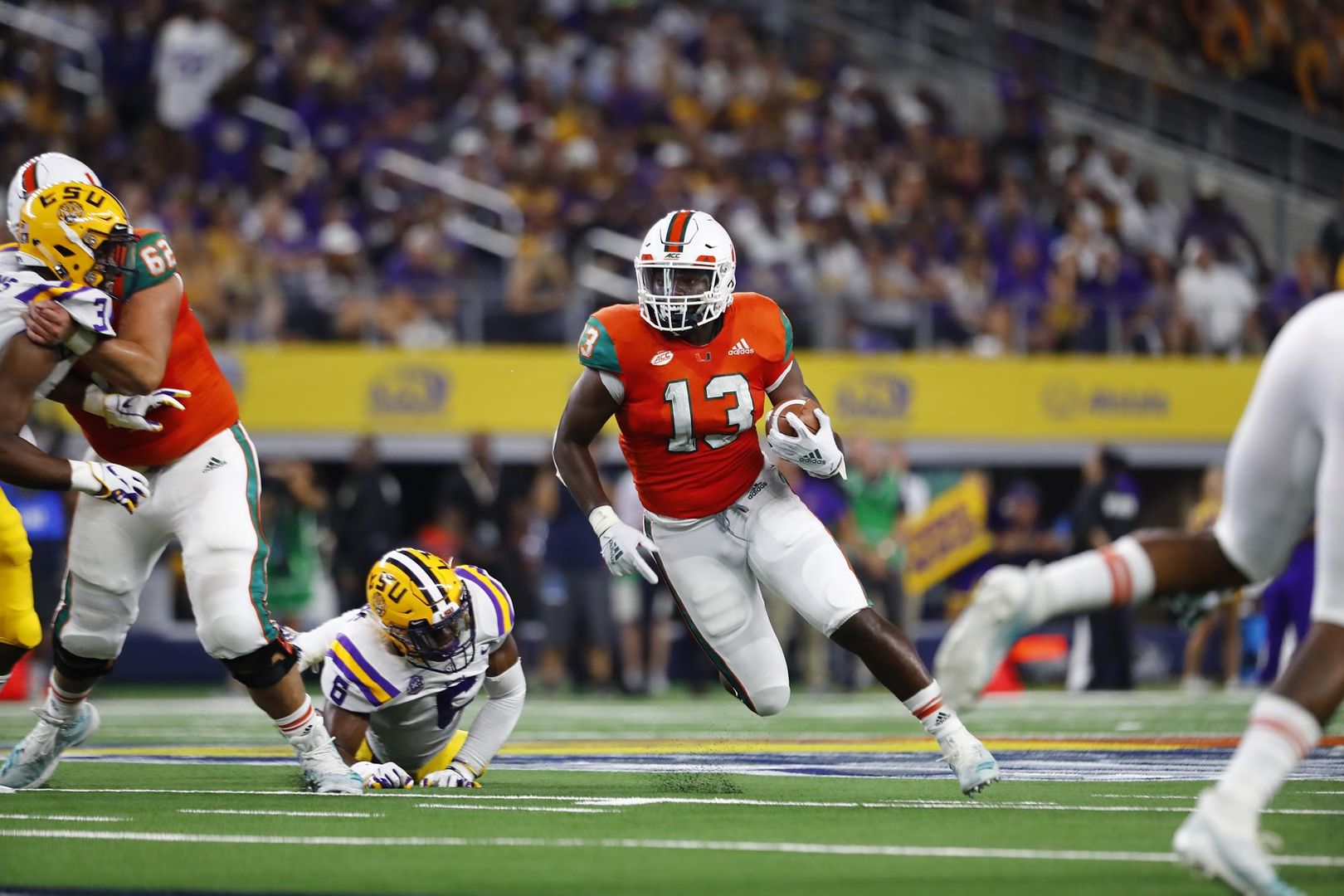 ARLINGTON, Texas – The Miami Hurricanes came to Texas looking for a statement win in the 2018 Advocare Classic, but the Canes fell short against LSU, 33-17.

The No. 8/8 Hurricanes (0-1) battled early, but a rash of first-half penalties helped the No. 25/24 Tigers (1-0) build a double-digit lead that Miami could not overcome at AT&T Stadium on Sunday night.

Less than five minutes into the game, sophomore defensive back Trajan Bandy was ejected for targeting after a hit on LSU receiver Dee Anderson. The personal foul gave the Tigers a fresh set of downs from the Miami 20 and meant the Canes would be without a key starter for the majority of the game.

The Hurricanes’ defense would hold LSU to a 43-yard field goal by Cole Tracy that gave the Tigers a 3-0 lead with 8:26 remaining in the opening quarter, but Bandy’s penalty proved to be a sign of things to come for Miami.

The Canes answered with a field goal of their own, as freshman Bubba Baxa converted a 38-yard attempt to tie the game, 3-3, with 6:49 left in the first quarter.

After forcing an LSU punt on the Tiger’s next possession, Miami was gaining momentum and forced LSU to use its third and final timeout of the first half with 3:05 left in the first quarter after starting its third drive gaining 30 yards on four plays to reach the LSU 40. The timeout proved effective, as the Hurricanes gained just 12 more yards and came away scoreless when Baxa missed a 45-yard field goal attempt wide left.

LSU added three more points on its next possession, as Tracy hit a 21-yard field goal to push the LSU lead to 17 with 4:56 left in the second quarter.

Miami looked to answer, as Travis Homer opened the Canes’ next possession with a 17-yard run near midfield. But the momentum was short-lived, as Ed Alexander tipped a Rosier pass that deflected into the arms of Jacob Phillips for a 45-yard interception returned for a touchdown that gave LSU a 27-3 lead with 4:21 remaining in the half.

Penalties crippled Miami in the opening half, as the Hurricanes were flagged eight times for 75 yards in the opening 30 minutes of play. Miami committed a defensive penalty on each of LSU’s four first-half scoring drives.

LSU picked off Rosier a second time when the redshirt senior, who was hit as he threw, sailed a pass intended for Mike Harley high and was intercepted by John Battle and returned 29 yards to the Miami 41 with 4:32 left in the third quarter. The Tigers converted the turnover into three points when Tracy hit a 54-yard field goal to give LSU a 30-point lead with 3:51 remaining in the third quarter.

Jeff Thomas’ acrobatic catch on the LSU sideline gave Miami a boost late in the third quarter, gaining 32 yards to convert a third-and-8 and put the Canes on the LSU 26. Six plays later, the Hurricanes found the end zone when Rosier rushed for a three-yard touchdown that made it 33-10, LSU, with 13:57 left in the game.

One possession later, Rosier and Thomas connected again for a 50-yard gain on third-and-18 to keep the drive alive and freshman Brian Hightower hauled in a 32-yard touchdown from Rosier on the next play from scrimmage to score his first career touchdown and bring the Canes within 16 with 8:43 remaining in the game.

Hightower became the first Miami player to score his first career touchdown on his first career catch since Marquez Williams in 2016, while Thomas eclipsed the 100-yard mark for the second time in his career as he hauled in five catches for a career-best 132 receiving yards.

Back-to-back pass interference penalties by LSU’s Kristian Fulton moved Miami into LSU territory on its next possession, but the Tigers’ defense held firm and Miami turned the ball over on downs with 4:40 remaining and making a Hurricanes comeback highly unlikely.

Senior defensive back Jaquan Johnson led the Hurricanes with 11 tackles (three solo), while defensive linemen Gerald Willis III and Jonathan Garvin each recorded eight tackles. Willis had four tackles for loss, while Garvin tallied three and each player recorded a sack for Miami.

The Hurricanes are back in action Saturday, as they host Savannah State at 6 p.m. in their home opener at Hard Rock Stadium.