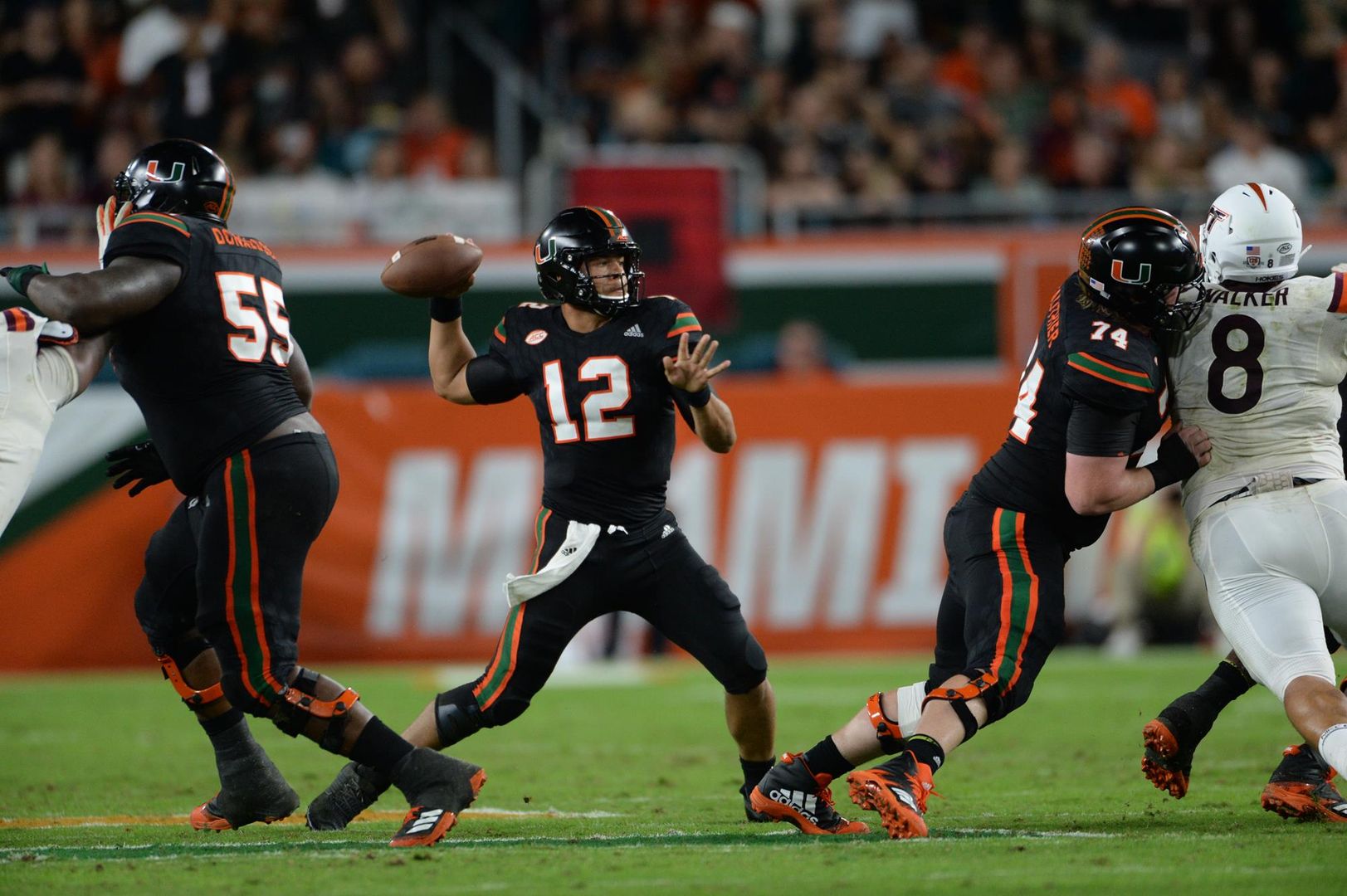 All Eyes on LSU as Advocare Classic Approaches

After nearly eight months since they last played, the No. 8 Miami Hurricanes are set to face off against No. 25/24 LSU at AT&T Stadium in Arlington, Texas.

All eyes will be on the Canes and Tigers as they kickoff their seasons on Sunday at 7:30 p.m. ET on ABC. Miami head coach Mark Richt knows his Hurricanes will face a daunting opponent when they take the field on Sunday against Ed Orgeron’s Tigers.

“We’re getting ready to play LSU,” Richt said. “Great football team. Historically great. I think ‘great’ is the way to describe them now, when you watch their film – very physical, fast team. They recruit as good or better than anybody in the country. They have more NFL players on rosters right now than anybody in America, that’s about three or four years running – there’s always great players there, great coaching. Coach Orgeron has done a wonderful job there of recruiting and motivating his team. Just watching the spring game, you can see the talent base they have and the way they get after it.”

Richt and his coaching staff have spent the month of August preparing the Hurricanes for the upcoming season, but everyone’s focus has been on their date with LSU on Sept. 2.

“I am excited about it,” offensive coordinator Thomas Brown said. “I think our guys are excited about it. I think it is a great opportunity for us to come out on prime time TV, only game on TV. Everybody is going to be watching to see how those guys respond and show up. I think we are ready for the moment. I am also excited to see how good we are out the gate. It won’t take long to see if we are really good or not because if it is all hype or not hype, you’ll learn that in a hurry. But I tell our guys all the time that we don’t coach scared. I don’t want those guys to play scared. Even from a coaching standpoint when it comes down to who is going to play or who doesn’t play. If you trust a guy, put them into the game. I don’t care if they just got here, or if he has been here four years. If he can help us win, and you trust him, put him in the rotation.”

Brown has spent much of fall camp evaluating who will be ready to step up once the lights turn on and the ball is kicked off on Sunday.

“The older guys should be able handle it, block it out,” Brown said. “The new guys, everything is new for them. So every experience they have, the first time they run out on the field, the first play they have, whether it be special teams or offense, is going to be new for them. So, we will kind of see how those guys handle it. We will base it all off of what they do in practice. If you can’t show up when it is a Saturday night scrimmage against our defense, I’m definitely not going to expect you to show up against LSU on Sunday night. So will kind of base it off of that.”

While the Hurricanes play in one of the finest venues in college football in Hard Rock Stadium, the trip to AT&T Stadium will be a new experience for them. All 80,000 seats are expected to be full when the game starts and that could be an intimidating feeling for someone who has never been in that position. But Richt and his staff have plans for helping get the team acclimated to unfamiliar territory.

“I’ve never been in a stadium like that,” Richt said. “I’ve never been in that stadium. As soon as we get in town we’re going to try to get over there and take a peek. I think LSU has played in it three or four times and have never lost – I don’t know how recent that is, I don’t know if the kids saw it last year or not. We’re going to at least get our team in there and let them look. It’ll be nothing like game day, I’m sure, but at least they’ll have a little bit of an idea of what they’re up against.”

Richt expects a loud and raucous crowd on Sunday night. The veteran head coach is using his past experiences to help prepare his offense for what is expected to be a deafening environment at AT&T Stadium.

“I think, without question, there will be more crowd noise than we can handle with our verbal cadence” Richt said. “We’ll be non-verbal. I would say there will be enough people from Miami to do the same. One year at Georgia, we played Boise State in the old dome. They might have had 10,000 people there, and we’re thinking, ‘no problem, we’ll use our verbal cadence and we’ll be just fine.’ Just the 10,000 made so much noise in that enclosed space, midway through the first quarter, we had to go non-verbal communication. That was a coaching error, just assuming it was not going to be that loud. I was wrong. I’ll never let that happen again.”

Less than 500 miles separate LSU’s Tiger Stadium in Baton Rouge, La., from AT&T Stadium, which has many believing Sunday’s crowd would favor the Bayou Bengals, but senior quarterback Malik Rosier says the Canes are not worried about what is happening in the stands.

“We don’t really care about that, to be honest,” Rosier said. “For us, it is a neutral site, and I feel like a lot of Miami fans are going to show up. I’ve had a lot of family and friends tell me that they are going to be there to support. They might have “home field advantage,” but for us, we are just going to go out there and play football, whether there are fans or not. It’s still 11-on-11 and 100 yards of field.”

Travis Homer will head into the season as the unquestioned starter at running back after emerging a year ago following the injury to Mark Walton. The junior expects the Hurricanes to be at their best when they face off against LSU on Sunday.

“Everyone is going to say we have something to prove, but I know I’m just going to believe in our team,” Homer said. “I think they are going to be shocked by what we have to bring to the table because of the way our offense has been playing and just the physicality of our defense.”

Senior Tyree St. Louis will line up at left tackle when the Canes open their first possession and he and his fellow offensive linemen are excited to prove themselves against one of the top defensive lines in the country.

“Games are definitely won in the trenches, and I am very excited on going against an SEC defensive line,” St. Louis said. “It’ll be the best competition for us and also we can put Miami on the map by saying ‘just because we are the ACC doesn’t mean we can’t compete against the SEC.'”

Fellow senior Tyler Gauthier is excited to open the season against a top-25 opponent and believes Sunday’s game could be the spark for a great season for the Canes.

“We all love the test that’s coming out the gate,” Gauthier said. “You know, they’re big, they’re strong. We’re not starting off with a smaller team this year; we’re jumping right into it. I think that’s what we need. We need that to get us going.”

The two teams last met in the 2005 Chick-Fil-A Peach Bowl and the game was one that most Miami fans have tried to forget, as LSU thrashed the Hurricanes, 40-3. But the Canes have also handled LSU one of their biggest losses ever, a dominant 44-3 Miami win in Baton Rouge in 1988. If history is any indicator, Sunday’s game will be a battle between two gifted programs looking to start the year with a statement victory and Richt is ensuring his team is ready for the challenge.

“Last time Miami played LSU, it was the worst defeat in a bowl game, probably ever, that Miami has had,” Richt said. “I think it was in the Peach Bowl. The biggest margin of victory in a bowl game for LSU – I think it was in 2005. We know we’re in for quite a challenge. Being a coach in the SEC for all those years, you know what LSU is about. I’ve had a chance to play them a few times. A great challenge, I’ll just say that.”