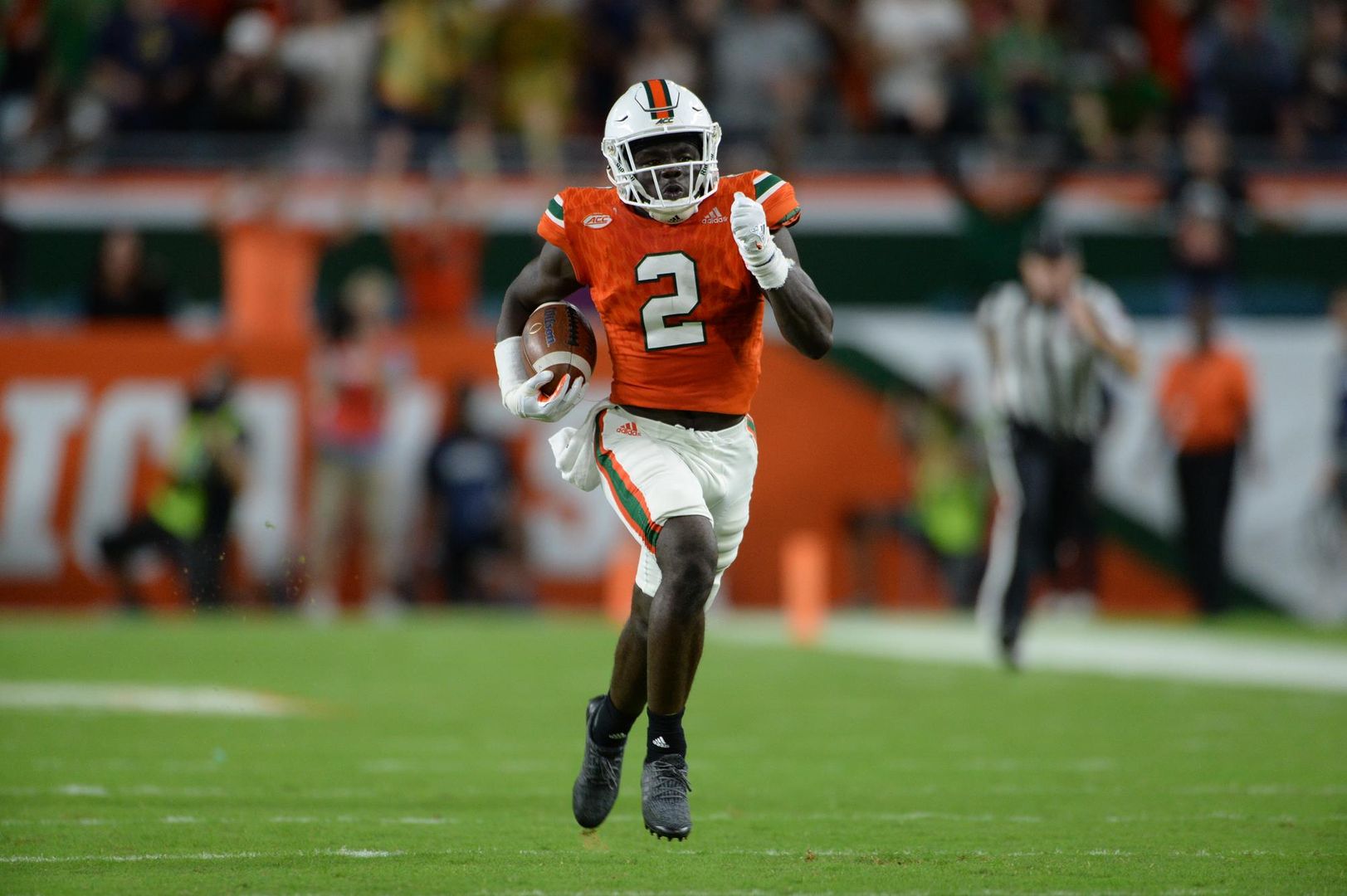 CORAL GABLES, Fla. – Everyone knows the big names on the Miami Hurricanes’ defense.

Shaquille Quarterman has been one of the top linebackers in the country since his freshman All-America debut season in 2016 and enters this year as a Preseason All-ACC selection and on the watch lists for the Nagurski Trophy, Butkus Award and Bednarik Award.

Joe Jackson and Michael Pinckney are two other standout defenders who have been major contributors, earning freshmen All-America honors in their first seasons as Hurricanes and growing into leadership roles as they enter their junior year.

But it takes more than a few big names to be an elite unit, as the Canes saw a year ago with the emergence of Jaquan Johnson and Michael Jackson. The duo proved to be two of the most dynamic defensive backs in the country in 2017, combining to don the Turnover Chain 11 times, after playing complimentary roles earlier in their career.

The Canes have several players who can be important contributors in Manny Diaz’s defense and some may even be the next breakout stars like Johnson and Jackson were a year ago.

Garvin is a name people will recognize from 2017, as the explosive defensive lineman earned more playing time as the season progressed and turned in strip sacks in back-to-back wins over Virginia Tech and Notre Dame. With Chad Thomas in the NFL, Garvin pairs with sackmaster Joe Jackson to keep Miami’s starting defensive end tandems in the upper echelon of the ACC.

“For a guy like Garvin, again, going into Year 2, it’s just the idea of down-for-down consistency,” Diaz said. “He obviously made some big-time flash plays a year ago. His skillset, his balance and things like that, is kind of elite. Now it’s just understanding how to complement that with different moves.”

And then there’s “The Tarantula.”

Rousseau has been the talk of the Greentree Practice Fields since enrolling at Miami in January. An athletic marvel, Rousseau uses his speed and power to wreak havoc in opposing backfields much like Jackson and Garvin. But it’s his length and first step that makes him especially unique.

RJ McIntosh and Kendrick Norton are in the NFL and the Canes enter 2018 with new starters at defensive tackle. Bethel moves up from a reserve role a year ago, while Willis returnsafter spending the 2017 season as a dominant force on the practice squad. Ford, who played sparingly as the fifth defensive tackle a year ago, is poised to make a big leap as a sophomore. The two newcomers are also expected to make some noise, as Silvera was an All-American in high school and Odenigbo is a graduate transfer from Illinois who has impressed Diaz early on in fall camp.

“He’s been outstanding,” Diaz said of Odenigbo. “We thought he would contribute. We liked what we saw on film from a year ago. We had a good feeling about him and he’s really exceeded our expectations. He’s just tough. He goes about his business. He can move. He can make plays in the backfield. He chases the ball. We feel like we’ve kind of lucked out in the grad transfer thing the last few years and we feel like we’ve got another great one in Tito. He’s really fit in really well with our guys, as well.”

The “striker” position is the newest role in the Hurricanes’ defensive arsenal and it is designed to get more playmakers on the field. McCloud and Wilder are considered linebackers, while Finley and Smith are safeties by trade, but all four have the skillset Diaz looks for in a “striker.”

“It’s about using our personnel,” Diaz said. “With big athletes like Derrick Smith and Romeo Finley, how can we get those guys on the field when you’re already blessed with two safeties like [Sheldrick] Redwine and [Jaquan] Johnson, with backups like [Amari] Carter and [Gurvan] Hall and Robert Knowles, that have really come along. You have a lot of talent at one position, so how do we get all those guys on the field? Bringing those guys closer to the box, their ability to play ‘man,’ be physical and to play the run, come off the edge, do a lot of different things – is really what it’s about. It’s not necessarily any type of innovative schematic invention. We’ve been playing ‘nickel’ forever. It’s, ‘Hey, look. Here’s the deck of cards we have. How do we best deal these cards out?'”
CORNERBACK
2 | Trajan Bandy | Sophomore | 5-9 | 188
3 | Gilbert Frierson | Freshman | 6-1 | 192
7 | Al Blades, Jr. | Freshman | 6-1 | 185
8 | DJ Ivey | Freshman | 6-1 | 194
27 | Nigel Bethel, Jr. | Freshman | 6-0 | 170

Bandy was excellent as Miami’s primary nickelback in 2017 and his 65-yard interception return for a touchdown in the Canes’ 41-8 thrashing of Notre Dame is a play that will live forever in Hurricane history. But 2018 will see Bandy getting more time at cornerback, meaning new responsibilities for him and a vacancy in the slot. While the striker position can take some of those nickelback duties, the quartet of Frierson, Blades, Ivey and Bethel is looking to earn playing time in a cornerback group that features Jackson, Bandy and Jhavonte Dean as its only experienced returners.

“Al Blades, from a consistency level, he shows up,” Diaz said. “He knows he’s in front. We’ve been very impressed with what we’ve seen from Nigel Bethel. Of the guys that just got to school, I’d say Al is a nose ahead of all the other ones.”

Frierson and Ivey had a leg up learning the playbook after enrolling in January, while Blades and Bethel have flashed ability in fall camp after joining the team over the summer. Bandy, who was a freshman standout a year ago, has some advice for his fellow young corners as they enter their inaugural collegiate season.

“Just stay with the course and look up to the older guys and watch them do things and try to go out there and do the same,” Bandy said. “It’s going to take time getting on the field, obviously, your first couple of years, but once you learn the system and learn how to play then everything can change for you. Be patient, but your time is definitely coming.”

Everyone knows that Miami has an outstanding starting safety tandem in seniors Jaquan Johnson and Sheldrick Redwine. The duo is talented, experienced and has earned the trust of Diaz, safeties coach Ephraim Banda and the rest of the Hurricanes’ defense. But Carter and Hall look primed to be the next great safety pair at Miami.

Carter made some noise as a freshman, delivering punishing hits while playing as a reserve safety and on special teams, while Hall enrolled in January and was impressive until an injury forced him to sit out the second half of spring football. An All-American in high school, Hall is fully recovered from his injury and has been flashing his playmaking ability in fall camp.

“Gurvan has been doing really well coming off his injury,” Redwine said. “He’s showing great range, he has great football speed and he’s aggressive. That’s a big thing that coach Diaz wants to tell the young guys that you’ve got to prove your toughness to the team. He’s been coming out striking, making plays on the ball and he’s impressed me.”