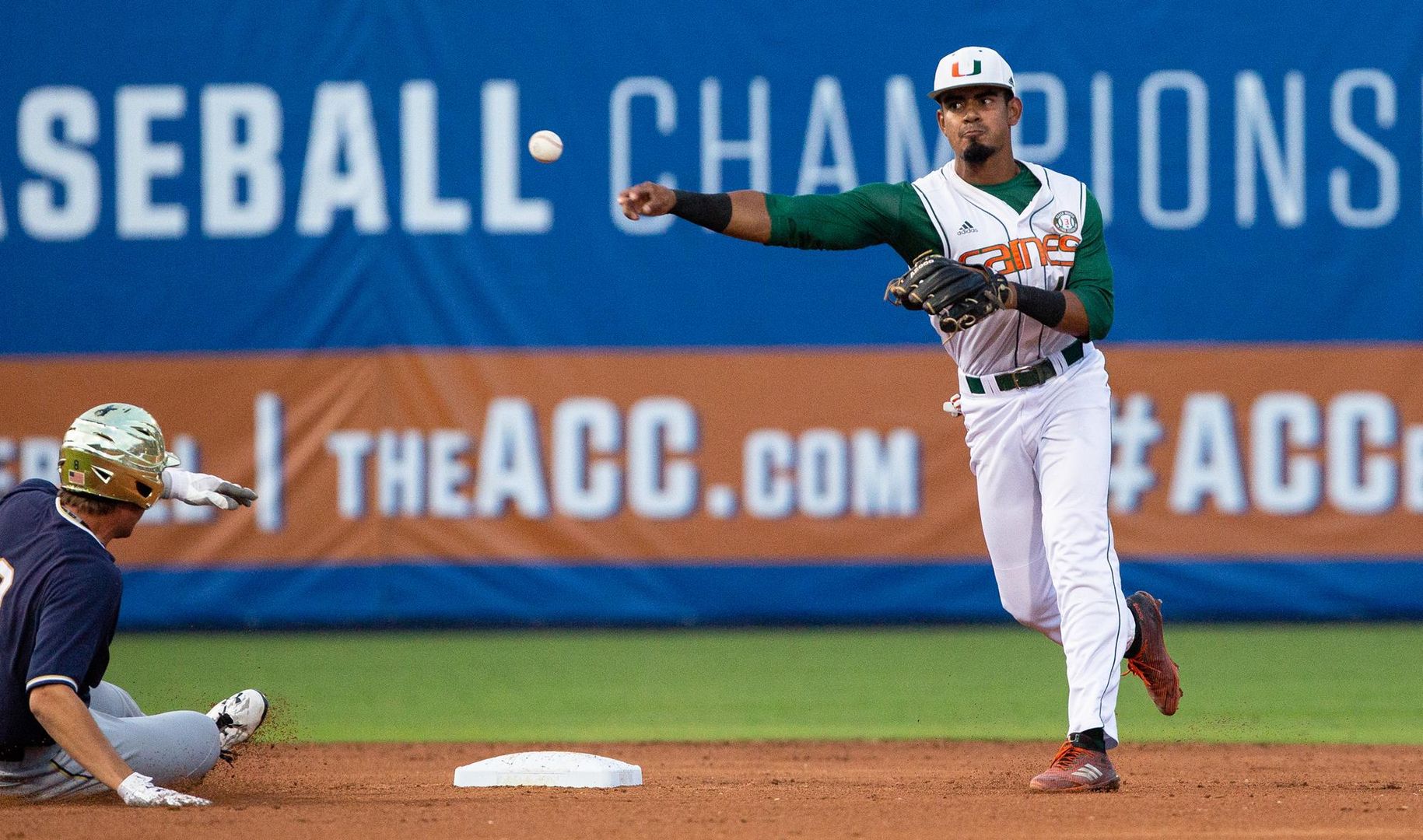 CORAL GABLES, Fla. – Down to their last six outs, the No. 7 seed Hurricanes staged a late comeback to win their opening game at the 2018 ACC Championship, 6-2, Tuesday night over No. 11 seed Notre Dame.

Miami trailed 2-1 entering the eighth, but batted around the order in an inning when they plated five runs off the Irish bullpen to take the lead.

Junior Danny Reyes delivered the game-tying hit, a double to right-center that scored freshman Tony Jenkins, who was hit by a pitch from Andrew Belcik to open the inning.

After a Notre Dame pitching change, senior Michael Burns kept the momentum rolling with an RBI single to center that scored junior Romy Gonzalez, who drew a walk from Belcik, to put Miami ahead.

Irish reliever Cole Kmet got back-to-back strikeouts to nearly escape the jam with Notre Dame trailing by a run, but freshman Raymond Gil knocked a pitch through the left side to score Reyes and push Miami’s lead to 4-2.

The knockout blow was a two-out, two-RBI single from Freddy Zamora two batters later that put the Hurricanes ahead by four runs.

Junior Frankie Bartow, who entered in the eighth inning, returned for the ninth and closed out the Irish.

The Hurricanes (28-25) opened the scoring Tuesday night on an RBI single from freshman Willy Escala in the second inning.

Gil connected on a two-out double off Notre Dame starter Scott Tully and advanced to third on a wild pitch to set up the scoring opportunity.

Escala came through for the Hurricanes, cracking a Tully pitch to left to score Gil.

Notre Dame (24-29) responded with a pair of runs in the next half-inning to take a one-run lead.

The Fighting Irish got an RBI single from Jake Johnson to tie the game and went ahead on a groundout from Nick Podkul that scored leadoff hitter Cole Daily.

Cabezas settled down after the rough third and pitched into the eighth before being relieved by Bartow.

The Hurricanes struggled to string any offense together off Tully, who tossed six strong innings for the Irish. Tully allowed five hits with four strikeouts and two walks before being relieved by Belcik to open the seventh.

Miami returns to Durham Bulls Athletic Park Thursday night for a Pool B matchup with No. 2 seed Clemson. If the Hurricanes win Thursday, May 24, they will advance to the semifinal round on Saturday, May 26.