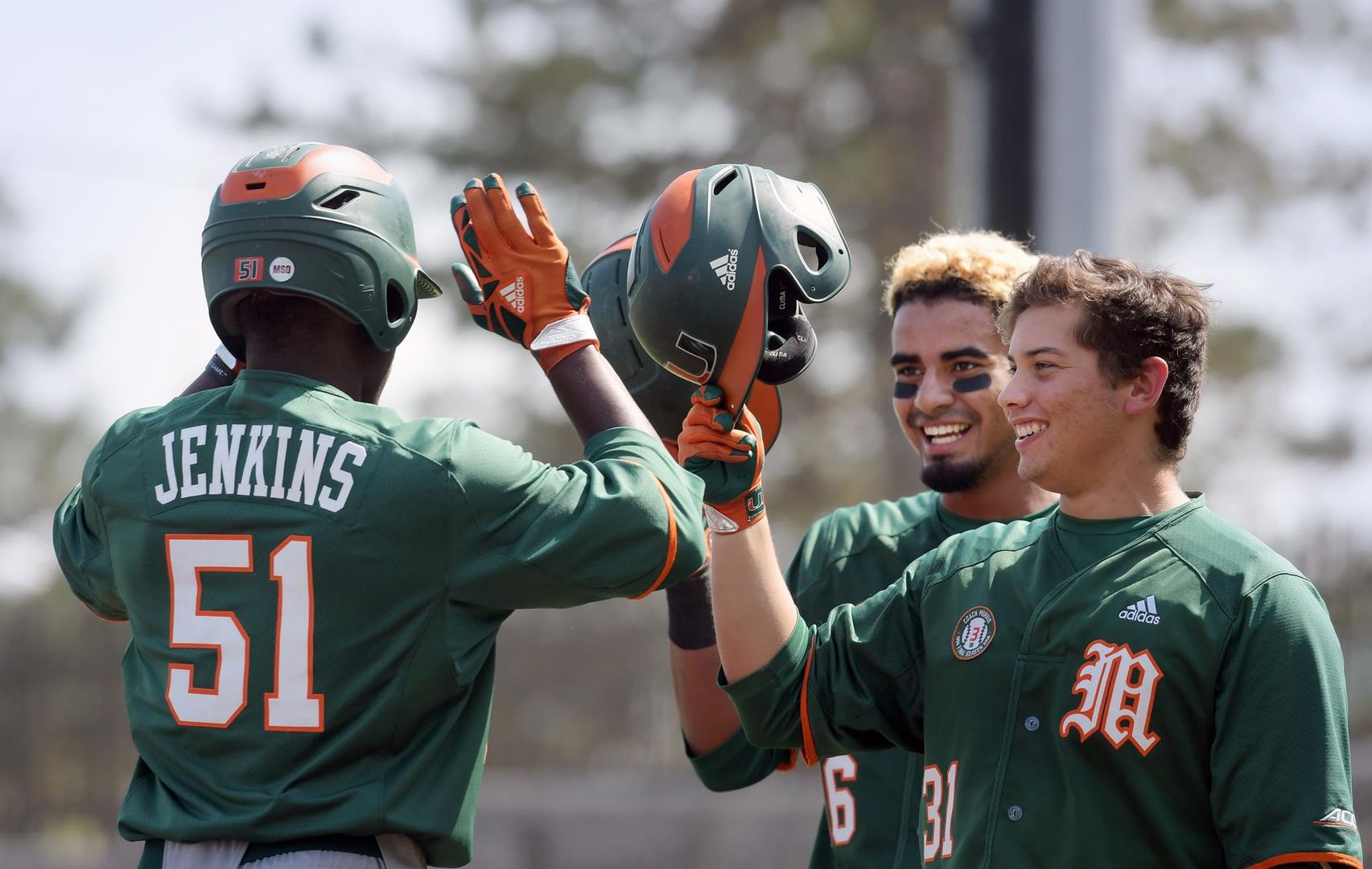 Canes Light Up Scoreboard in 16-4 Thrashing at VT

BLACKSBURG, Va. – Tony Jenkins returned to the Miami outfield on May 9 against FGCU in place of an injured Michael Burns.

He has made his presence felt ever since.

A day after scoring the winning run in a thrilling 12-inning victory, Jenkins clubbed the first two home runs of his career in Miami’s 19-hit barrage, keying a 16-4 victory over Virginia Tech in Game 2.

Miami capitalized on seemingly every scoring opportunity, collecting 11 hits with runners on base (11-for-25) and nine with runners in scoring position (9-for-22).

“Jenkins of course had the big day with two home runs, but lots of guys had a lot of big hits,” head coach Jim Morris said. “We did well statistically with guys in scoring position and guys on base. We hit very well situationally.”

Sophomore righthander Evan McKendry tossed eight strong innings for Miami, weaving his way out of significant damage for most of the afternoon. He struck out eight and scattered nine hits and four runs (three earned) in another quality effort.

“McKendry was a big story today, too,” Morris said. “He got the win. He pitched eight innings and he could have pitched nine. His pitch count was down.”

Jenkins, who reached base three times in the series opener, recorded the first multi-homer game by a Hurricane this season in a career-best four-RBI performance. He reached base five more times Saturday to power the Miami offense.

“Most importantly, just getting a pitch I can drive,” Jenkins said of his approach at the plate. “Something in my zone. I was really attacking the fastball today, not trying to fall deep in the count.”

The win clinched a trip to the 2018 ACC Baseball Championship in Durham, N.C., for the Hurricanes.

Sophomore Greg Veliz made his first appearance since March 10, retiring the side in order in the ninth to close out the win.

“It’s big to get [Veliz] back,” Morris said. “He had really good stuff…it looked like he was healthy and ready to go. That was huge.”

McKendry (6-6) delivered another effective performance, despite a three-run rally for Virginia Tech in the game’s first inning. The righthander settled down after the tough start, and did not allow another run until a fifth-inning solo shot from JD Mundy with Miami already ahead 9-3.

The Pembroke Pines, Fla., native became the first Hurricane to top the 100-strikeout mark in a season since Bryan Radziewski did so in 2014; his eight punchouts Saturday upped his season total to 103.

“From the second [inning] on, he pitched outstanding,” Morris said. “There were some things that went wrong early. Sometimes when you score a lot early, there’s a little bit of a letdown or loss of concentration, but I think it got his attention.

“He went right back at them and pitched well.”

Jenkins opened the scoring with a two-run home run in the first and added another two-run shot in the second.

The Hurricanes batted around in a first where they did the bulk of their damage against Virginia Tech starter Connor Coward.

After Jenkins’ first homer put Miami up 2-0, the Hurricanes loaded the bases on two singles and a hit batter.

Redshirt freshman Michael Amditis came through on the early scoring opportunity, cranking a two-out double to left center that cleared the bases and put Miami up 5-0.

The Hokies strung together three runs on four hits off McKendry in the home half of the first, but Jenkins’ second home run of the game chased Coward (2-6) and put Miami up 7-3 – a lead that was not in jeopardy for the remainder of the afternoon.

Jenkins has scored six runs in the series so far and has also drawn a team-best five walks in the past two games.

“Really just trying to do whatever I can for the team,” he said. “Whether it’s sacrificing myself, trying to get on base, whatever it is, that’s what I want to do.”

A sacrifice fly from junior Danny Reyes and an RBI single from Dylan Cloonan pushed Miami’s lead to 9-3 in the fourth.

The Hurricanes’ offense was not retired in order until the fifth, but two innings later, the Miami offense put together a seven-run seventh to widen the gap.

Miami received a two-RBI single from Freddy Zamora, back-to-back RBI singles from Gonzalez and Reyes, a ground-rule RBI double from Cloonan and an RBI groundout from freshman Alex Toral, all in one inning, to effectively end the game.

Zamora reached base for the 17thstraight game while Cloonan extended his career-long hitting streak to eight straight games.

The two teams return to English Field Sunday for the series finale. First pitch for the contest, slated for broadcast on ACC Network Extra and WVUM 90.5 FM, is set for 1 p.m.