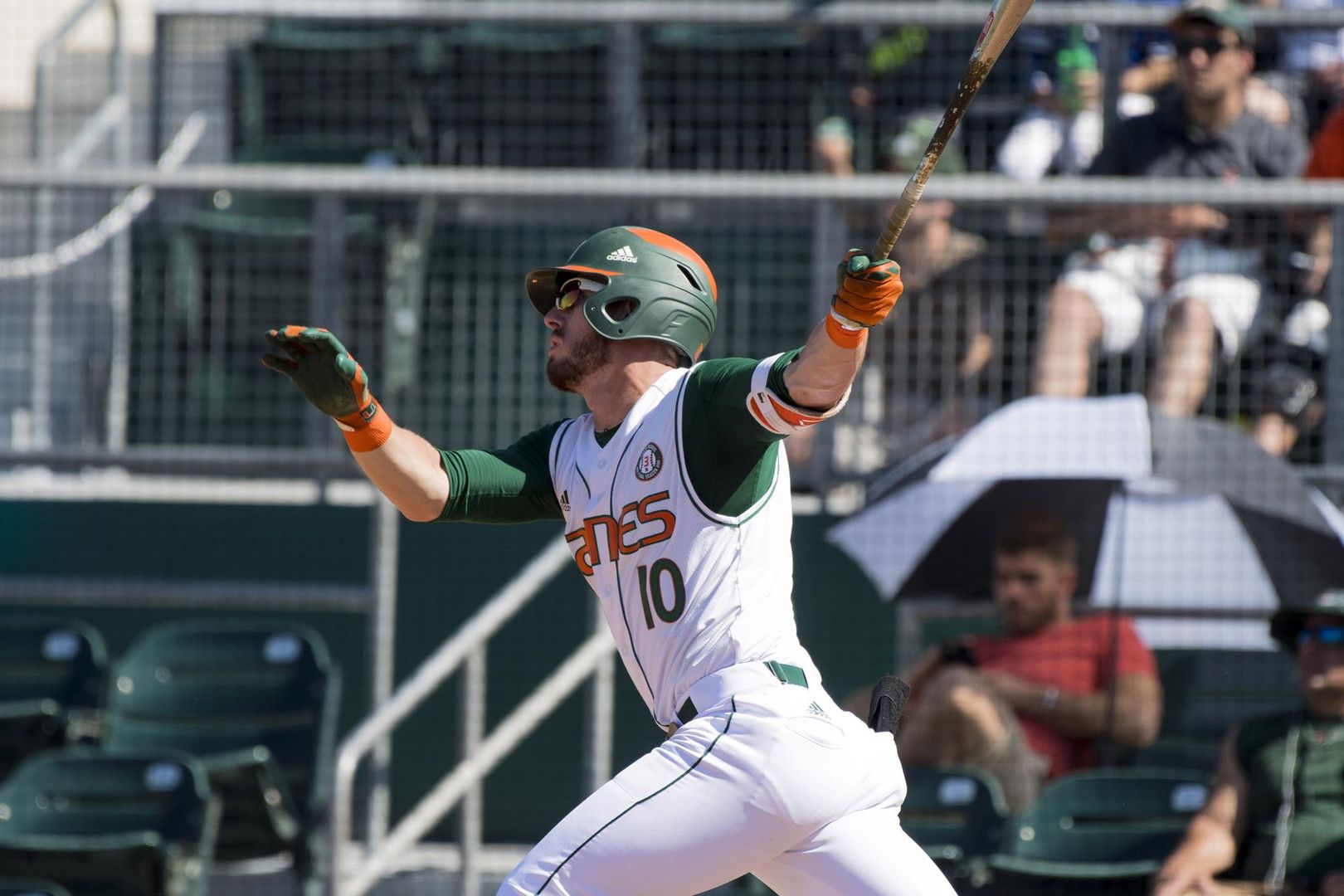 CORAL GABLES, Fla. – It took five hours and 28 minutes, but the Hurricanes departed with a win Sunday evening– exactly what head coach Jim Morris and his team were looking for.

In a game that featured a near two-hour rain delay, eight pitching changes and 28 combined hits, junior Romy Gonzalez walked it off for the Hurricanes in a 12-11 win to cap a weekend sweep of Bethune-Cookman at Alex Rodriguez Park at Mark Light Field.

The hit was Gonzalez’ third of the ballgame and the most important of a 13-hit barrage from the Miami offense, which powered the hosts to their fourth straight victory.

“We were trying to be aggressive and not deviate from our game and our approach – just drive the baseball, and that’s what we did today,” Gonzalez said. “It was a great team win.”

Gonzalez, who recorded his third multi-hit game in the last four games, totaled six hits in three games against Bethune-Cookman, including three in the finale (3-for-5).

“I felt like in the early going of the year, I was trying to do too much, and not just relaxing and letting the game come to me,” Gonzalez said. “I’m just trying to see the ball and hit it.”

The marathon affair was marred by a lengthy delay in the game’s first inning that ended junior righthander Andrew Cabezas’ afternoon after just more than an inning’s worth of work.

Trailing 4-0 after the Wildcats’ first two trips to the plate, the Hurricanes (21-25) came roaring back with seven runs in the second and four in the third to go ahead, 11-4.

The Hurricanes sent 13 batters to the plate in the second, when junior Danny Reyes opened with a single and freshman Dylan Cloonan followed with a double.

A walk from senior Hunter Tackett loaded the bases, and another walk – this one to freshman Willy Escala – forced in a run and prompted a Bethune-Cookman pitching change.

Freshman Freddy Zamora cracked a two-RBI double to cut the lead to 4-3 and freshman Isaac Quinones’ two-RBI double put Miami ahead for the first time at 5-4.

Gonzalez added an RBI single and Tackett drew another bases-loaded walk to make it 7-4.

Quinones finished 3-for-6 at the plate– a performance that included a game-high four RBI – and has 10 RBI in his last four games.

But the Wildcats (18-31) battled back, striking for four runs in the fifth and two more in the sixth to cut the Miami lead to 11-10.

Bethune-Cookman’s Adonis Lao connected on a solo home run in the eighth off Miami reliever Frankie Bartow to tie the game and complete a rare cycle at the plate in a 4-for-6 performance.

But one day after freshman Dylan Cloonan connected on a walk-off single, Gonzalez stole the spotlight from Lao, cracking a pitch from reliever Brandon Wilkes (0-3) up the middle to score the speedy Escala from second base and end a long afternoon for both teams.

Bartow (3-0) tossed the game’s final three innings to pick up the win – Miami’s fourth of the walk-off variety this spring.

The Hurricanes return to Alex Rodriguez Park Wednesday for a midweek matchup with FGCU. First pitch for the contest, slated for broadcast on ACC Network Extra and WVUM 90.5 FM, is set for 7 p.m.

“We just have to turn the page and get ready for the next one,” Gonzalez said. “We have Florida Gulf Coast this week on Wednesday, and that’s a huge one for us. We just have to keep things rolling.”