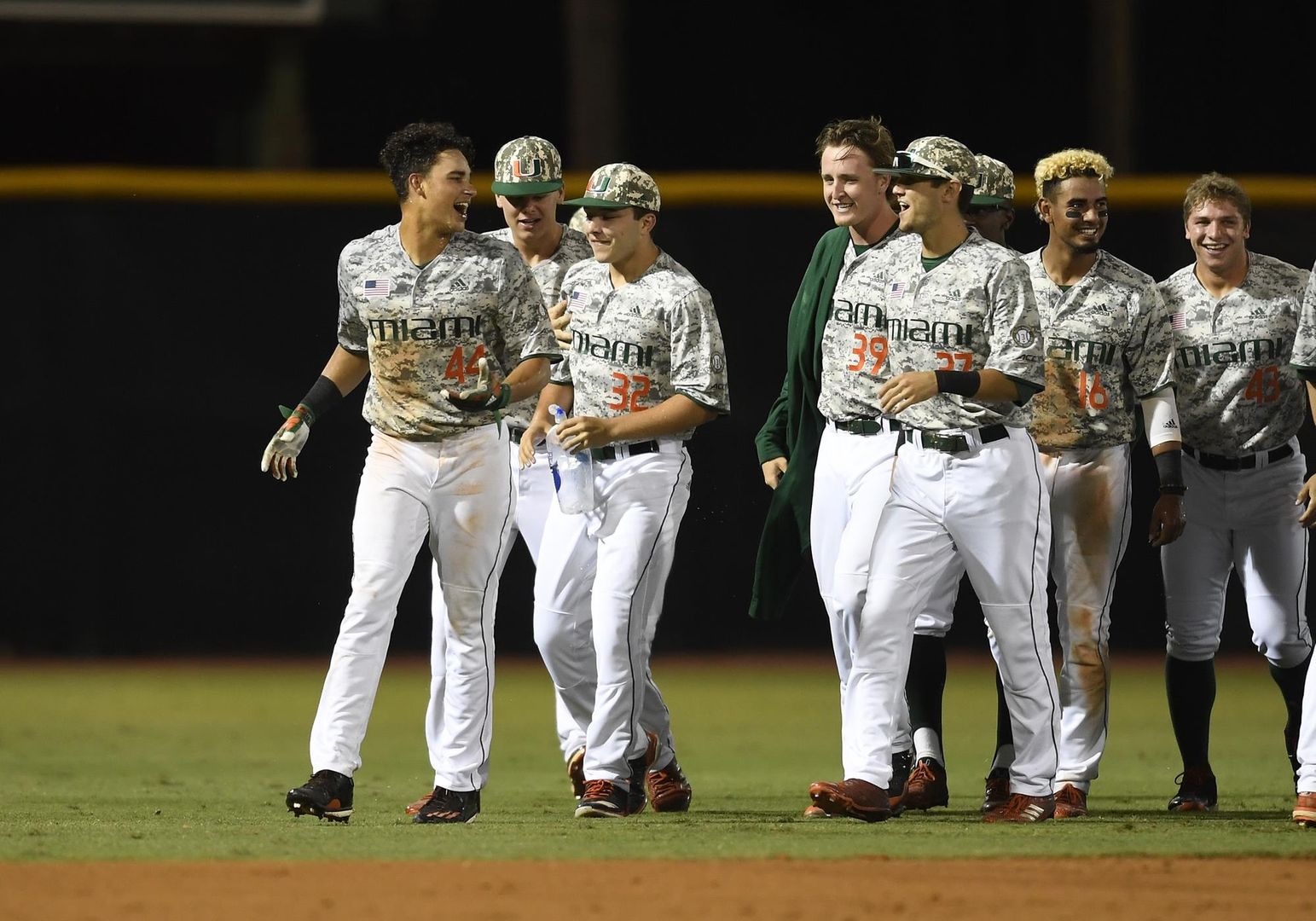 CORAL GABLES, Fla. – Freshman Dylan Cloonan played the hero Saturday night, connecting on a walk-off single in the bottom of the ninth to guide the Hurricanes past Bethune-Cookman, 8-7, at Alex Rodriguez Park at Mark Light Field.

The hit – Miami’s fourth of the inning off reliever Ivan Coutinho – scored senior Michael Burns from third to complete a late comeback effort for the Hurricanes (20-25).

Trailing 7-6 and down to their final three outs, Miami got four straight hits to pull off its third walk-off win of the spring.

“A dream come true,” Cloonan said of his first walk-off hit as a Hurricane. “Growing up in Miami, I always wanted to play here. I’ve watched games here for most of my life. It was a cool moment.”

Junior Romy Gonzalez singled to center to open the inning, Burns followed with an infield single, and junior Danny Reyes cranked the first pitch he saw from Coutinho (3-3) down the left field line to plate Gonzalez.

Cloonan, who was 0-for-3 entering the final at bat, belted a 2-2 pitch from Coutinho past third baseman Jordan Stacy and into shallow left to clinch Miami’s third straight win and a series victory over the Wildcats (18-30).

“Once I got two strikes, I was sitting back and hoping I could hit his curveball – that’s mostly what he was throwing to everybody in that inning,” he said of his approach in the game’s final at bat.

In a game that featured five lead changes, Miami fell behind early, took its first lead on a three-run home run from freshman Raymond Gil in the second and rallied after falling behind late.

Reyes added a solo home run as part of a three-run sixth inning.

Bethune-Cookman took a first-inning lead on an RBI groundball from Nate Sterijevski.

Gil erased the lead in the second with a monstrous home run off Bethune-Cookman starter Anthony Maldonado.

With Burns on second and Reyes on first, Gil cranked a 2-0 pitch over the fence in left-center for his third home run of the season.

The Wildcats tied the game with a pair of runs in the fourth and regained the lead with two more runs in the fifth.

Miami righthander Evan McKendry was tagged for five runs in five innings. He struck out six, walked two and scattered eight hits across 84 pitches before departing with his team trailing 5-3.

Reyes’ solo shot to left cut the deficit to 5-4 in the sixth. Miami wasn’t done there, forcing Bethune-Cookman into three pitching changes in the inning alone.

Coutinho entered in relief and issued a bases-loaded walk to Isaac Quinones to put the Hurricanes ahead at 6-5, but the Wildcats plated single runs in the seventh and eighth to go back on top.

But Cloonan delivered when it mattered most, giving Miami a chance at a weekend sweep Sunday at 1 p.m.

“It’s a streak starter – we’re finally clicking,” Cloonan said. “We’re mostly freshmen. We’re getting used to each other, getting used to the captains and the older guys who are great for us. They’re great role models. We’re starting to connect – which we wished happened faster in the beginning of the season- but we’re getting there together.”

The Hurricanes and Wildcats return to Alex Rodriguez Park at Mark Light Field Sunday for the series finale. First pitch for the contest, slated for broadcast on ACC Network Extra, 790 The Ticket and WVUM 90.5 FM, is set for 1 p.m.