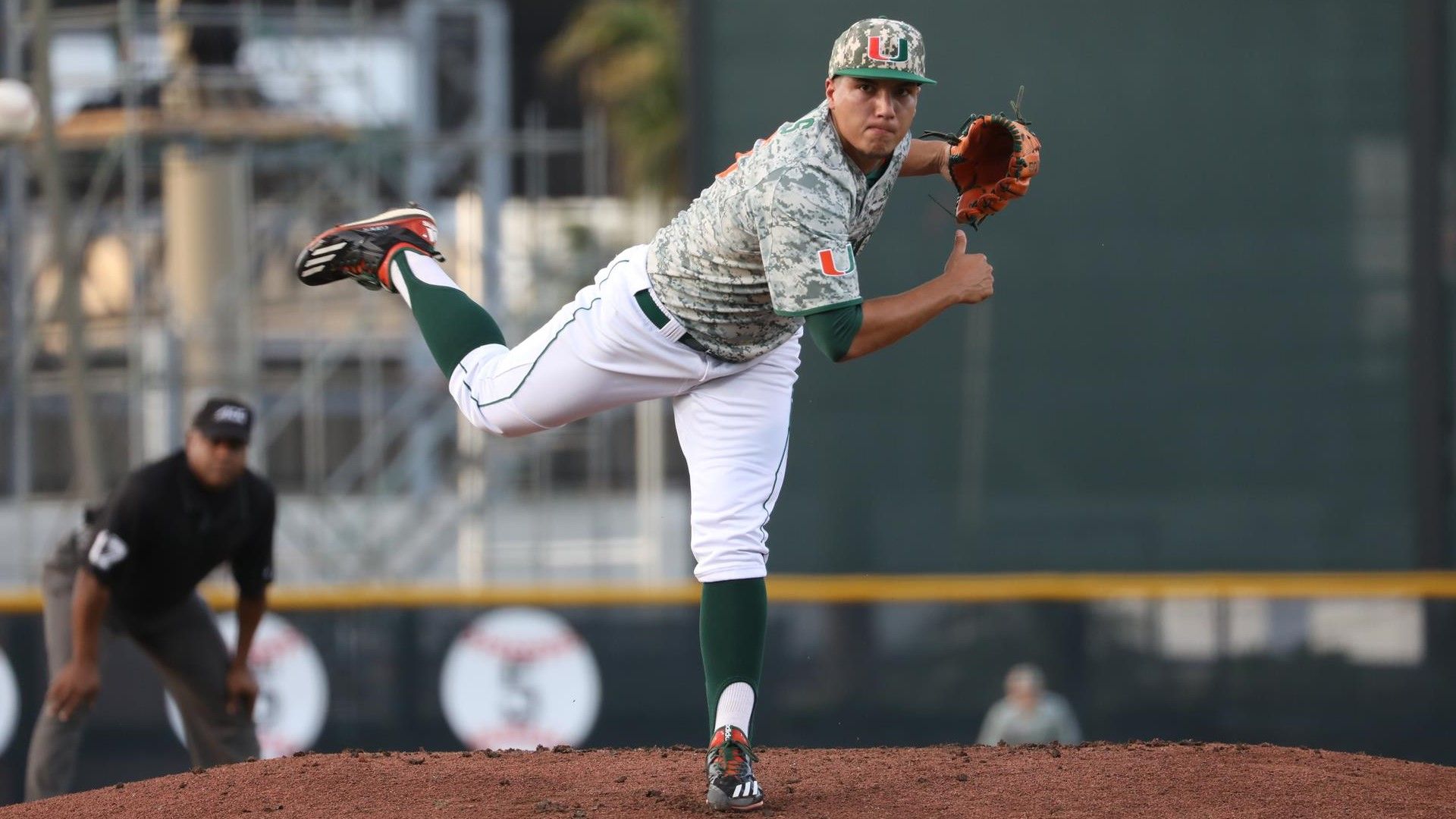 After impressive outings from senior Jeb Bargfeldt and sophomore Evan McKendry in the first two games of the series, junior Andrew Cabezas was overpowering in a complete game shutout to help Miami capture a 3-0 win over Pitt in the series finale.

Cabezas allowed just three hits and three walks with a career high-tying 11 strikeouts in his first true complete game of the season to salvage the series in the second game of a doubleheader in front of 3,123 fans.

Junior Danny Reyes homered to lead the Miami offense, which out-hit the Panthers, 6-3, in the win.

Cabezas (4-4), who struggled in his last outing at then-No. 8 Clemson, tossed all five innings in a rain-shortened win over North Carolina for his first complete game on April 1.

But that was nothing compared to Saturday’s gem, where he tossed 120 pitches in the first complete game shutout by a Miami hurler since Thomas Woodrey accomplished the feat on May 14, 2015 against Georgia Tech.

Miami’s three starting pitchers combined for a staff ERA of 1.19 ERA and 26 strikeouts in 22.2 innings this weekend.

The Miami Gardens, Fla., native showed no signs of fatigue as he worked deeper into his start against the Panthers. The fiery righthander retired the side in order in the fifth, seventh and eighth innings, and allowed just three baserunners after the fourth.

He had thrown more than 100 pitches in eight innings, but got summoned for the ninth and added two more strikeouts, including a game-ending whiff of Ron Washington, Jr.

“I was really surprised I was going back out there for the ninth,” Cabezas said. “As soon as they gave me the go, I was very excited. I knew I was going to give it my all.”

Working with efficiency for most of the night, Cabezas threw 73 strikes in a scintillating performance.

“In the very beginning, I couldn’t get my off-speed pitches over the plate for strikes,” Cabezas said. “I was relying mainly on my fastball command for early contact, because in my first couple of innings, my pitch count was running high.”

Cabezas said he found a feel for his off-speed pitches in the game’s middle frames during pre-inning warmups.”

“They had to respect that I was finally throwing my off-speed pitches for strikes,” he said. “As the game went on, I started feeling better, better and better. I’m grateful that my teammates had my back.”

The Hurricanes (17-22, 10-11 ACC) struck first Saturday night, taking a 1-0 lead in the second inning on an RBI single from senior Michael Burns.

With freshman Isaac Quinones on second after a single and a stolen base, Burns cracked a full-count offering from Pitt starter Blair Calvo into centerfield to open the game’s scoring.

Miami doubled its lead in the fourth on the homer from Reyes, who lifted a pitch from Calvo (1-3) well over the fence in left for his second home run of the season and first since Opening Day.

Reyes, who missed 25 games with a torn ligament in his thumb on Feb. 25, started all three games against the Panthers (21-16, 10-11 ACC) in his first major action since the injury.

“I love Danny like a brother. We’ve been playing with and against each other since we were eight years old,” Cabezas said. “He has my back and I have his…seeing how he has handling adversity is just amazing. I really look up to him for that reason, because it’s not easy.”

Miami added an insurance run in the eighth. Senior Hunter Tackett singled to open the inning, freshman Alex Toral walked and freshman Willy Escala reached on a fielder’s choice to load the bases.

A sacrifice fly from junior Romy Gonzalez was plenty deep enough to plate Tackett to push the Hurricanes’ lead to 3-0.

That was more than enough for Cabezas, who allowed a single in the ninth but got two strikeouts to seal the win and the third complete game by a Hurricanes’ pitcher this season.

The Hurricanes close out a five-game homestand Wednesday against FIU at Alex Rodriguez Park at Mark Light Field. First pitch for the contest, slated for broadcast on ACC Network Extra and WVUM 90.5 FM, is set for 6 p.m.