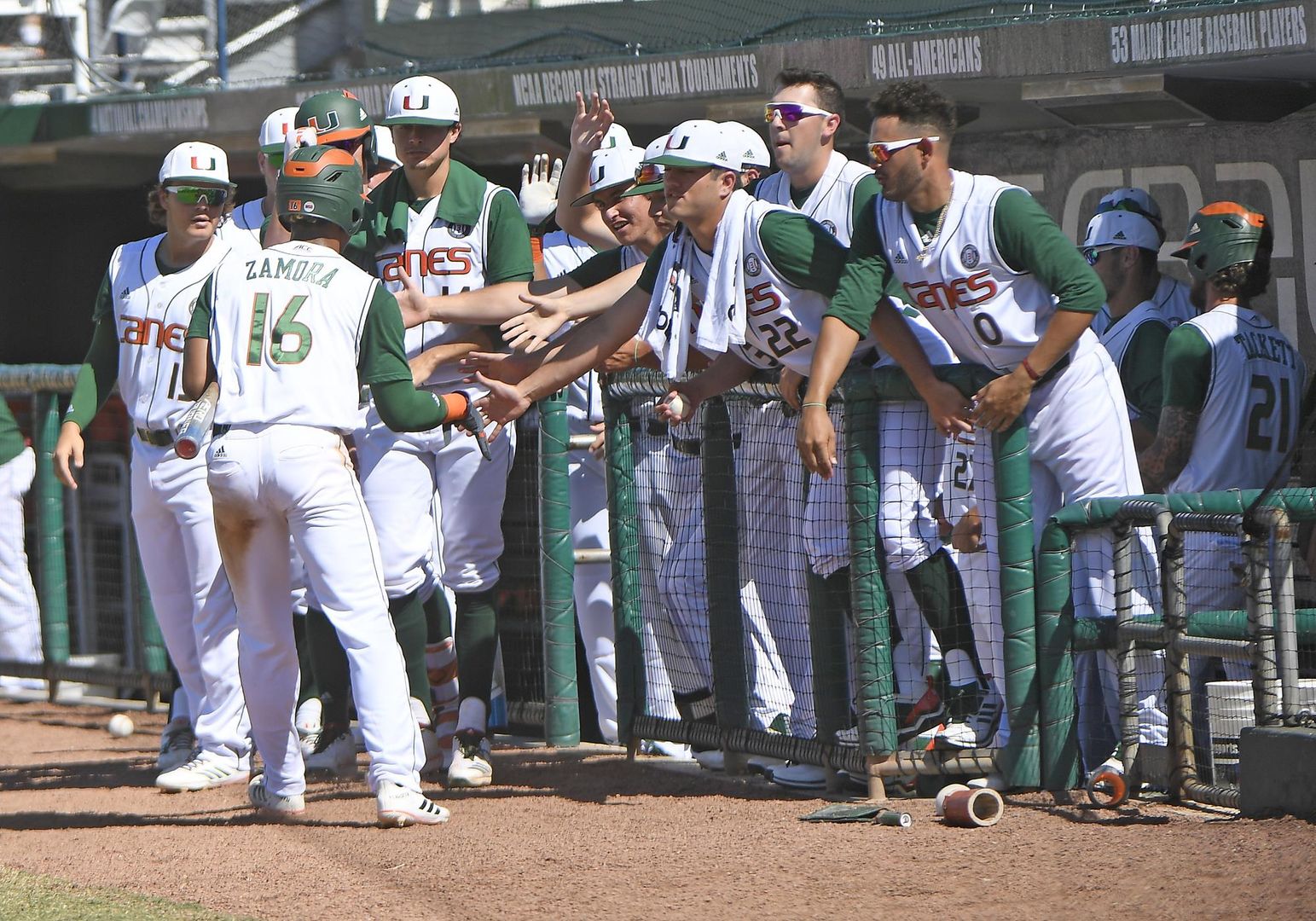 CORAL GABLES, Fla. – Miami used a six-run fifth inning to mount an impressive comeback and came through with a 7-5 win over North Carolina in a rain-shortened series finale Sunday afternoon.

With start time already bumped up one hour due to anticipated weather, the game went into a rain delay that turned permanent in the middle of the sixth.

North Carolina (21-11, 10-5 ACC) had cut Miami’s lead to 7-6 in the sixth, but due to heavy rain and lightning that ended the contest, the game reverted back to the score through the last completed inning – 7-5, at the end of five.

Cabezas (3-3), who added two more strikeouts in the sixth that were eventually cancelled out due to the rain, was credited with four punchouts in the win.

Trailing 5-1 in the fifth, the Hurricanes plated three runs on a bases-loaded triple from senior Michael Burns, one more on a sacrifice fly and two more on a double from freshman Freddy Zamora to take a 7-5 lead.

Miami (13-18, 7-8 ACC) jumped over Joey Lancellotti from the get-go, jumpstarted by a first-pitch single from junior Romy Gonzalez to load the bases with one out.

Burns belted a triple over the head of outfielder Brandon Riley, scoring all three runners on a ball that rolled to the wall in centerfield.

Freshman Isaac Quinones drove in Burns with a flyout to left to tie the game, 5-5, and the Hurricanes weren’t done.

Freshman Dylan Cloonan lined a double down the right field line and freshman Tyler Paige – making his first start as a Hurricane – walked to reach base for the third time.

Zamora came through on the scoring opportunity, cranking an offering from Carolina reliever Brett Daniels to plate left runners.

Miami opened the scoring in the first when Zamora crossed the plate on an error charged to North Carolina shortstop Ike Freeman.

Zamora, who opened the game with a single off North Carolina starter Rodney Hutchison, advanced to second when Willy Escala was hit with a pitch and took third on a double play.

He would score on Freeman’s throw that got past first base on a groundball from Hunter Tackett.

North Carolina took the lead with three runs in the second on back-to-back doubles from Clemente Inclan and Brandon Martorano off Cabezas.

The Tar Heels added two runs in the fifth to go up 5-1 before Miami staged its impressive comeback.

Miami returns to Alex Rodriguez Park at Mark Light Field Wednesday for a midweek matchup with UCF. First pitch for the contest, slated for broadcast on ACC Network Extra, is slated for 6 p.m.