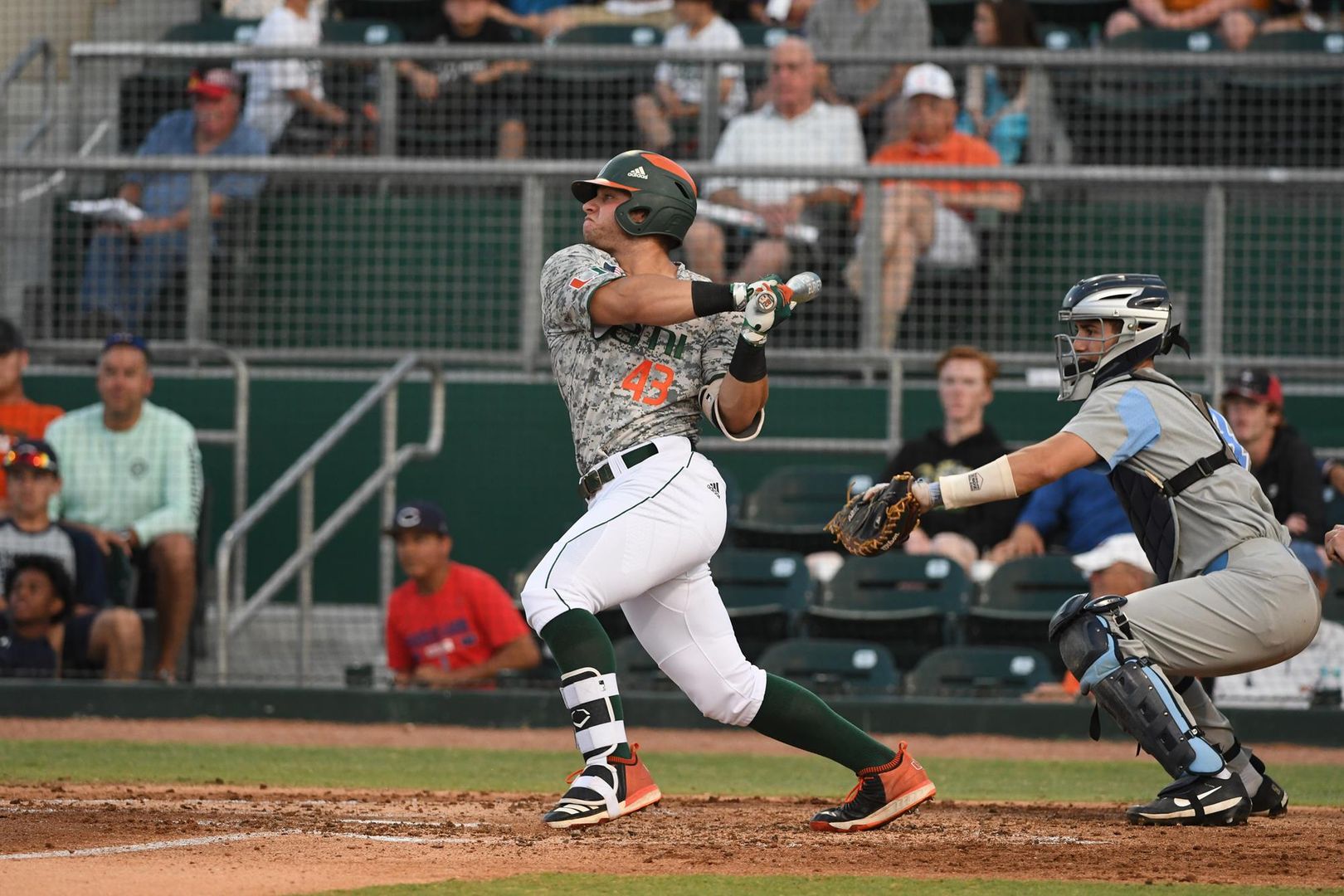 CORAL GABLES, Fla. – Freshman Gabe Rivera homered for the second time in the past five games, but it wasn’t enough for the Hurricanes, who fell, 9-6, to visiting North Carolina Saturday night.

In a back-and-forth affair at Alex Rodriguez Park at Mark Light Field, the Hurricanes (12-18, 6-8 ACC) took the lead in the first, saw the game tied by the third, fell behind in the fourth and fought back in the middle innings.

Miami trimmed the deficit as close as one run at 6-5, but the Tar Heels tacked on insurance in the later innings to clinch a series win.

Trailing 1-0 in the bottom of the first, Rivera blasted a pitch from Tar Heels starter Austin Bergner to right field for his first home run at Alex Rodriguez Park at Mark Light Field.

With two runners in scoring position and one out, Rivera – making the first start of his career in the clean-up spot – smashed a 1-2 pitch from Bergner for an opposite field shot.

The Tar Heels (21-10, 10-4 ACC) tied the game in the third on a sacrifice fly from Kyle Datres and an RBI single from Zack Gahagan.

North Carolina went ahead for good on a bases-loaded double from Michael Busch down the left field line in the fourth that plated all three runners.

The Hurricanes fought back and chased Bergner in the home half of the inning.

Senior Michael Burns opened the frame with a single and senior Hunter Tackett followed with a walk, prompting a pitching change.

With two runners in scoring position, freshman Michael Amditis connected on a groundout to first off reliever Caden O’Brien, but Busch’s throw to home was off-line, allowing Burns to score on the error.

An RBI groundout from freshman Willy Escala two batters later rimmed the deficit to one run at 6-5.

But North Carolina added a run in the sixth and two more in the seventh to push the lead back to four at 9-5.

Bergner was tagged for seven hits and five runs in 3.0+ innings. He threw 69 pitches, struck out one and walked two.

Zamora cracked the first pitch he saw from reliever Cooper Criswell well over the fence in left for a solo home run in the seventh.

Other than Zamora’s homer, Criswell (2-2) was sharp for the visitors in relief. The righthander struck out 13 over 5.2 strong innings of relief after entering in the fourth.

The Hurricanes and Tar Heels return to Alex Rodriguez Park at Mark Light Field Sunday for the series finale. First pitch for the contest, slated for broadcast on ACC Network Extra, 790 The Ticket, WVUM 90.5 FM and 990 AM ESPN Deportes, is set for 12 p.m.