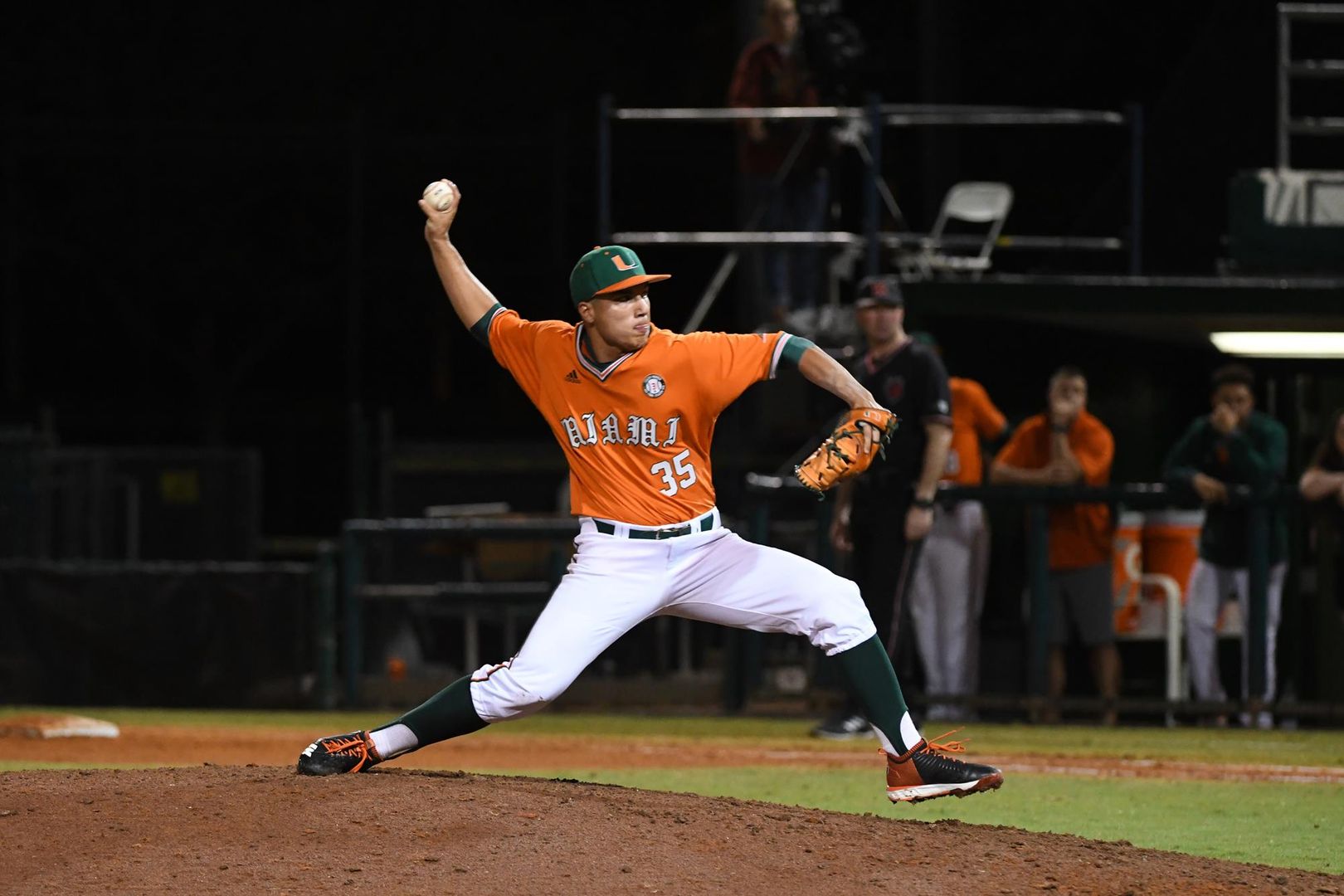 Miami Earns Win Over No. 21 Duke

DURHAM, N.C. – Junior Andrew Cabezas shined in his first start of the season, Miami’s offense shook off a slow start to the series, and the Hurricanes departed Durham Bulls Athletic Park with a resounding 8-2 win over No. 23 Duke Sunday afternoon.

Cabezas, who had not made a start since helping clinch a College World Series trip in an NCAA Super Regional game in 2016, was dominant from the outset against the Blue Devils.

The fiery rigthhander, who served as the team’s closer to start the year, allowed just three singles and one walk in six dominant innings.

He struck out five, walked just one and needed only 74 pitches in an efficient outing.

Cabezas (1-2) was backed by an offense that was more than Duke righthander Ryan Day could handle. The Hurricanes tagged Day for two runs in the first, two more in the second, and chased him in a third inning where they extended their early lead to 7-0.

The 15 hits were tied for the most by Miami in any game this season.

Duke’s only two runs came on a two-run home run in the ninth inning.

The Hurricanes (9-10, 3-3 ACC) wasted little time in opening the scoring, stringing together four straight two-out hits in the first inning to take an early 2-0 lead.

After a single from Tackett to center, senior Michael Perez cracked the first pitch he saw from Day (1-2) down the right field line for a stand-up double. He would score on an RBI single to center from senior Michael Burns.

Miami’s two runs in the second came on RBI singles from Tackett and Cloonan.

The Hurricanes offense, which collected just six hits Saturday in a 4-1 loss, came up with four hits in the third inning alone.

Freshman Isaac Quinones, who extended his hitting streak earlier in the game to a career-best 10 games, was the last batter Day would face after a double put two runners in scoring position.

But the Duke pitching change did little to deter the Hurricanes’ onslaught.

Freshman Alex Toral clobbered the first pitch he saw from Blue Devils’ reliever Matt Dockman off the ‘Blue Monster’ in left field for a run-scoring double, an RBI groundout from Ray Gil made it 6-0, and an RBI double from freshman Freddy Zamora scored Toral to cap the inning’s scoring.

That was more than enough for Cabezas, who allowed just one Blue Devil to reach as far as second base – in the third inning.

The Hurricanes added a run in the sixth on an RBI double from Cloonan off Duke reliever Bryce Jarvis.

Redshirt senior Cooper Hammond allowed a two-out, two-run home run in the ninth, but induced a game-ending groundout to seal the victory.

Miami returns home to Alex Rodriguez Park at Mark Light Field Wednesday for a matchup with FAU. First pitch for the contest, slated for broadcast on ACC Network Extra and WVUM 90.5 FM, is set for 6 p.m.