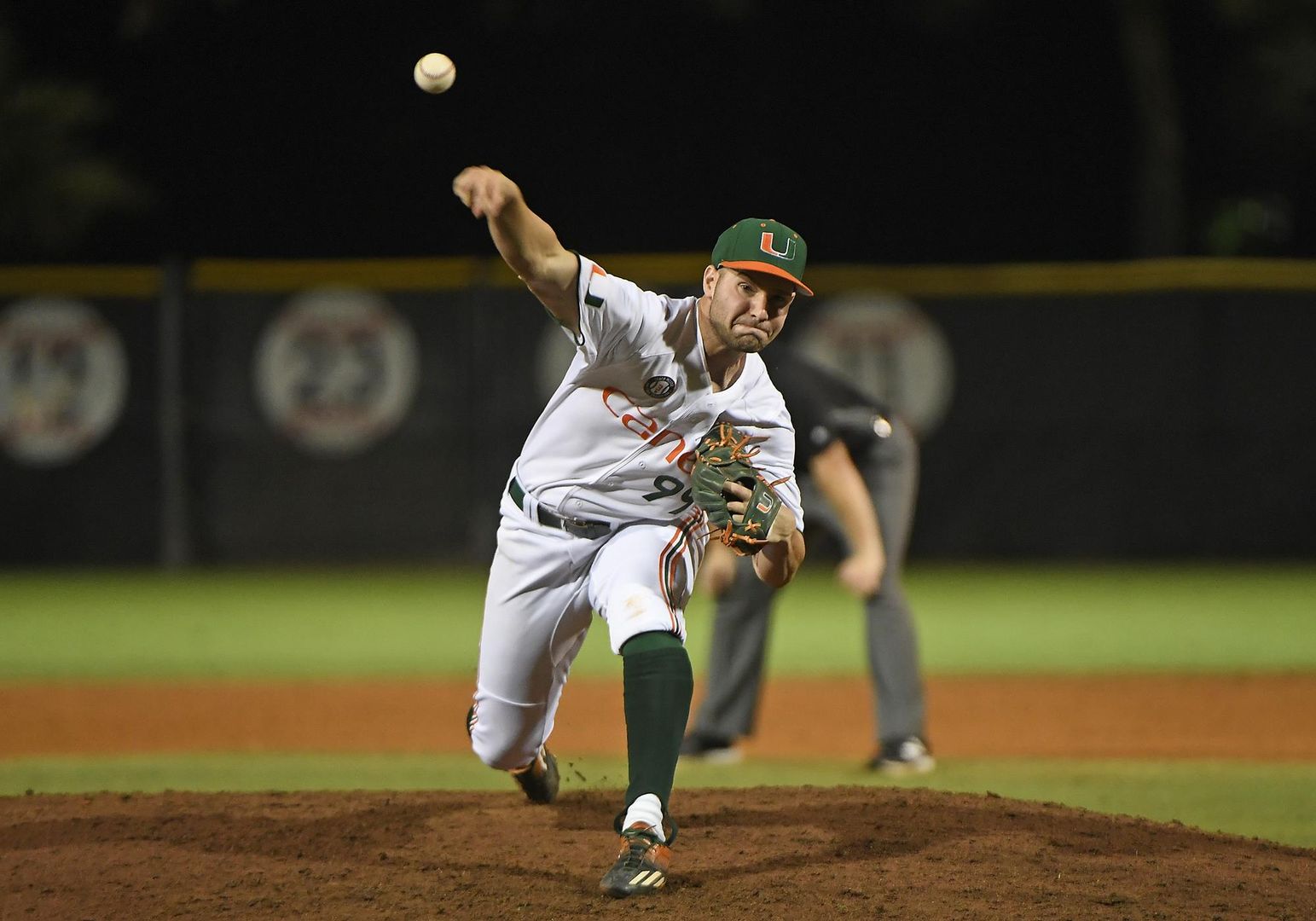 Miami Knocks Off No. 21 UCF in Orlando

ORLANDO – Freshman righthander Daniel Federman made the most of his first collegiate start, and Miami snapped the nation’s longest winning streak with a 4-3 win over No. 21 UCF Wednesday night at John Euliano Park.

Federman (1-1) tossed five strong innings for the Hurricanes (8-8), who ended a stretch of 13 straight victories by the Knights.

“It was big for a lot of reasons, one because they’re ranked in the top 25,” head coach Jim Morris said. “It was a team effort. Federman made his first start and we got a great effort there. A lot of guys offensively did a good job.”

Miami received a sparkling effort from its bullpen, which allowed no runs over the game’s final three innings to seal the win in front of 2,188 fans.

Freshman Freddy Zamora paced the offense with his first three-hit game as a Hurricane (3-for-4).

Federman allowed three runs (one earned) and struck out a career-high five batters in a career-long outing. Junior Frankie Bartow pitched two scoreless innings, junior Andrew Cabezas pitched a clean eighth inning, and redshirt senior Cooper Hammond picked up his second save of the season with a scoreless ninth.

“The blood was flowing, but once you get going, it’s just another game,” Federman said. “I wanted to come out here and give my team the best opportunity to win. They had my back today.”

The Hurricanes wasted little time in opening the scoring, tagging UCF lefthander Joe Sheridan for a run in the game’s first inning.

A leadoff ground rule double from freshman Tony Jenkins was followed two at bats later by a walk from senior Hunter Tackett to set up the scoring opportunity.

Junior slugger Romy Gonzalez delivered, cracking a 1-1 pitch from Sheridan through the right side to plate Jenkins for a 1-0 lead.

Rylan Thomas answered for the hosts on a solo home run in the home half of the first off Federman.

Trailing 3-1 after two innings after the Knights plated a pair of unearned runs in the second, the Hurricanes tied the game with a pair of their own in the fourth.

A walk from Gonzalez and a single from Zamora put two runners on to open the inning, and a groundout from Isaac Quinones moved both runners into scoring position.

Freshman Willy Escala came through in a big spot, knocking in two runs on a single to left and extending his hitting streak to a career-best seven games.

Federman did not give up a run after a second-inning outfield error aided a two-run frame for the Knights (14-4).

“Most of pitching is mental, and you have to block stuff that you can’t control out,” Federman said. “The defense is going to help you out more than they hurt you. I just forgot about it and tried to pick everyone up.”

Quinones (1-for-4), who extended his own hitting streak to seven earlier in the game, put Miami ahead with a groundout in the sixth off Sheridan.

The run scored Zamora, who tripled to right field with one out in the sixth. UCF’s Brody Wofford made a valiant effort, but Zamora’s ball dropped and rolled past the UCF right fielder, allowing the freshman to take third base on the play.

Quinones took advantage of the scoring chance with a groundout to shortstop Brandon Hernandez, who bobbled a hard-hit grounder but managed to get the out at first as Zamora crossed the plate.

Miami’s bullpen took over from there, and the Hurricanes remained undefeated in games played in Orlando in the series (8-0).

“We have to play better defense. We made some mistakes there, but we won, we won late and our bullpen did a great job,” Morris said.

The Hurricanes will travel to Durham, N.C., for a three-game series with host No. 23 Duke at Durham Bulls Athletic Park. First pitch for Friday’s series opener is set for 6 p.m. on ACC Network Extra and WVUM 90.5 FM.