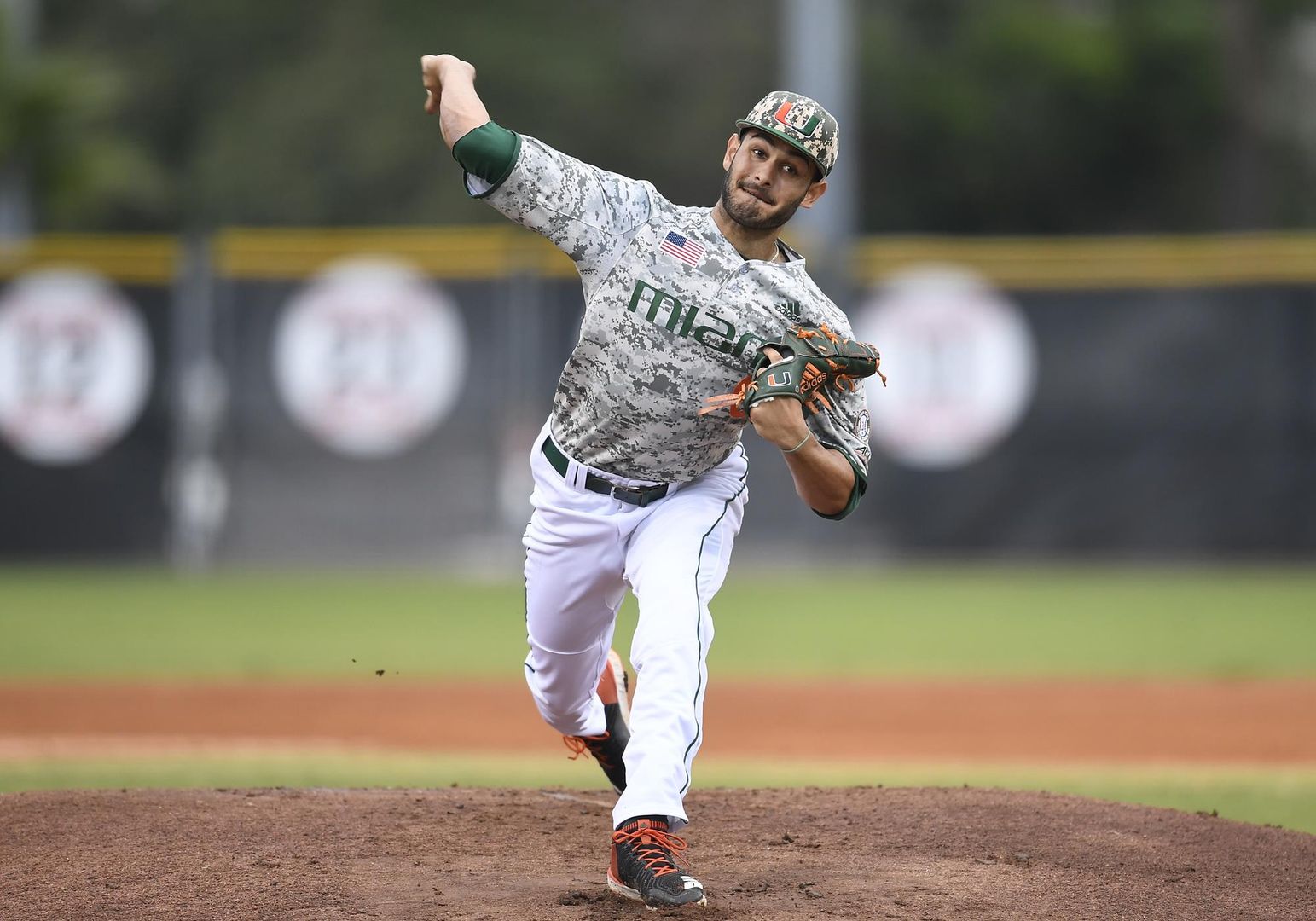 CORAL GABLES, Fla. – Notre Dame plated four runs in the top of the 10th inning to salvage the series Saturday night, as Miami fell, 9-5, in the nightcap of a doubleheader at Alex Rodriguez Park at Mark Light Field.

With the game tied 5-5, the Fighting Irish scored two runs on an RBI double from Alex Kerschner and two more on a fielding error at third by Miami.

The Hurricanes (7-8, 1-2 ACC) nearly ended the game a half-inning prior, when red-hot Hunter Tackett dropped a single into right field with freshman Freddy Zamora on second.

But, with two outs, right fielder Eric Gilgenbach fired a strike home to catcher David LaManna, who applied the tag to get Zamora, sending the game into extras.

Miami wasted little time in opening the scoring, as an RBI single from the red-hot Hunter Tackett – who had at least one hit in all three games of the series – scored freshman Tony Jenkins, who walked to open the inning.

The Fighting Irish (7-6, 1-2 ACC) would respond, however, plating their first run of the series in the weekend’s 20th inning – an RBI single from Jared Miller in the top of the second.

Notre Dame slugged Nick Podkul added a two-run home run in the second inning off Miami starter Greg Veliz, and a sacrifice fly from Miller in the fourth padded the visitors’ lead.

Veliz allowed three hits and four runs (two earned) in four innings. He struck out eight for the second straight start, walked one and threw 79 pitches.

Notre Dame’s Cameron Junker struck out six and walked four in three innings. He surrendered just one run and one hit on the night.

Trailing 4-1 early, the Hurricanes plated four runs in the fourth off Notre Dame reliever Cole Kmet to regain the lead.

Miami got a sacrifice fly from freshman Alex Toral that scored Isaac Quinones, who singled and advanced to third on a throwing error by catcher David LaManna earlier in the inning.

With freshman Willy Escala at third, Jenkins grounded a ball to first base that David Jung opted to throw home. Escala slid in safe, however, beating the throw to LaManna and cutting the deficit to one at 4-3.

Senior Michael Burns then cranked a game-tying double to left-center off Kmet, scoring Jenkins to make it 4-4. A chopper of a groundout from Zamora was too high for the tall Kmet to handle and scored Burns from third, putting the Hurricanes back on top at 5-4.

The Fighting Irish tied the game, 5-5, in the seventh on an RBI single from Matt Vierling that scored Cole Daily, who doubled off reliever Andrew Cabezas to open the inning.

Cabezas (0-2) suffered the loss after allowing three runs in 3.2 innings of relief. Notre Dame reliever Matt Vierling (1-1) picked up the win with 1.2 innings after opening the game in centerfield.

The Hurricanes next travel to UCF for a midweek game against the host Knights on Wed., March 14. First pitch for the contest, slated for broadcast on WVUM 90.5 FM, is set for 6:30 p.m.